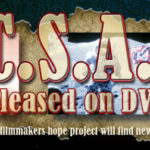 Like hundreds of other area residents, producer Rick Cowan had a juicy cameo role in his film “C.S.A.: The Confederate States of America.”

“We did it like one of those cheap ads you would see for a comedy club on TV,” says Cowan of his part in the faux documentary, which envisions a modern America in which the South won the Civil War and slavery is still legal.

“I had a scene where I played a stand-up comic – an anti-Jeff Foxworthy. The jokes in there are much along the same lines that Foxworthy would tell you, just replace the word ‘redneck’ with ‘Yankee.’ ‘You know you’re a Yankee if …'”

Despite Cowan’s cinematic clout, the bit ended up on the proverbial cutting-room floor.

But the producer can now be seen in “C.S.A.” – as part of the deleted scenes that are a bonus feature on the DVD, which gets released nationwide today.

“A lot of people have heard about the movie but didn’t see it,” says writer-director Kevin Willmott. “Our hope is that those people will go rent it or buy it. The other big thing is that schools are very interested in the film. They’ll be a lot of people who will be buying the movie to use in universities and high schools.”

The DVD will deliver several special features. In addition to the deleted scenes, there is a documentary about the creative team’s experience taking the picture to the Sundance Film Festival. Willmott also is involved with two commentary tracks. On the first, he and Cowan discuss the mechanics of the movie, often from the viewpoint of how an independent filmmaker with no money made a feature.

The second commentary track focuses on the history angle of “C.S.A.”

“It’s the thing I always talk about with the fake history being the real history,” says Willmott, an associate professor of theater and film at Kansas University.

“It’s the last leg of the film, really. I traveled around the country talking about the film for a couple years. There were a lot of things I learned in that process that I was able to share on the DVD.”

All the audio commentary was recorded at Kansas University’s Oldfather Studios.

Both Cowan and Willmott found the process more difficult than expected.

“It’s more grueling than you think,” Cowan says. “It took us three separate sessions to sit through it. It was almost cathartic because it was really good to go back through and talk about some of the fun things and some of the odd things that happened while we were shooting.”

So did they gain any additional insights about the project when revisiting it for the commentary?

“Probably not, just for the simple fact that we have sat through hundreds of hours of editing that film. Every discovery we were going to make, we had made, elevated, discounted and probably come back to our original opinion through the process,” Cowan says.

The experience of watching a film gain its national video release was quite different with this picture than with Willmott’s previous effort, “Ninth Street.” Since that 1999 drama never gained theatrical studio backing, the filmmaker found himself out of the loop once he signed a distribution deal.

“‘Ninth Street’ was really funny. A friend of mine wrote me and said, ‘I got your movie on DVD.’ I said, ‘You got MY MOVIE on DVD? When did THAT happen?’

“The filmmaker is always the last to know these things.”

Although “C.S.A.” was issued theatrically by IFC Films, the DVD was subbed out to the Weinstein Company. (That’s the studio run by the former Miramax moguls, Harvey and Bob Weinstein.)

“I do believe that Weinstein believes it has a good video life,” Cowan says.

Willmott says that already there is a certain buzz about the picture being available at neighborhood Blockbusters and the like.

“My son is an Internet guy,” Willmott says. “I don’t hang out on it as much as a lot of folks do. I don’t have time. But he said, ‘Man, they’re downloading you all over the place. That’s a real good sign.'”

Certain movies over the years have endured modest box-office returns, only to develop a huge audience once they entered the home video market. (“Office Space,” “Clerks” and “Crash” are a few of those beneficiaries.)

If that becomes a reality for “C.S.A.,” the filmmakers stand to make a cut of the financial action. But they are quick to downplay the potential rewards.

“With the advance IFC paid us so we could finish the film, and the money they put into promotion and marketing the theatrical release, they are well in the hole on the film to date. So there’s a deep hole that has to be filled with DVD sales before our split on that would ever be realized,” Cowan explains.

“C.S.A.” made around $670,000 at the domestic box-office. While the budget has never been released, the filmmakers have always claimed it was well under $1 million.

“We walk into any film deal at this point believing that the advance is all you’ll ever see,” Cowan says. “If you get beyond that, you’re pleasantly surprised.”