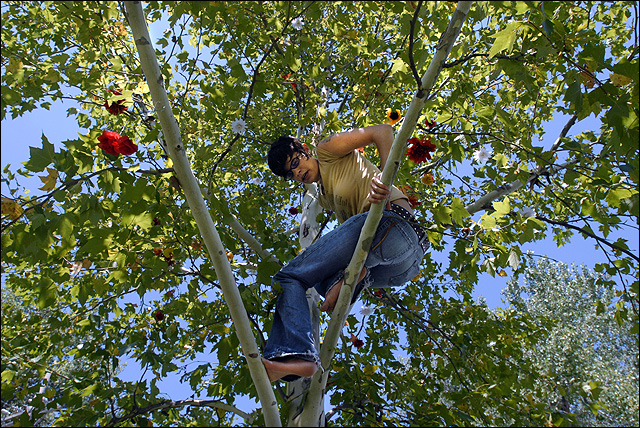 Jessica Cohenour, St. Louis, makes her way down from a tree in Burcham Park after decorating it with flowers in preparation for today's Bleeding Kansas Arts & Music Festival. Vendors, stage crews and others worked throughout the day on Friday preparing the park for the event.

Every once in awhile, Doug Moles is drawn outside by the sounds of loud music coming from Burcham Park.

He lives just a few hundred yards from the park at Second and Indiana streets. A fan of live music, he often goes down to the park to check out the acts.

Moles will hear the music again today, when the Bleeding Kansas Arts & Music Festival makes its debut at the riverside park. Organizers expect 3,500 to 4,000 people to pack Burcham – and cars will pack the neighborhood.

“I think it’s a good thing,” he said. “People forget the speed limit is 20 through here. But most people don’t park illegally or do anything stupid.”

Burcham Park has seen an uptick in live music events this year. In addition to today’s festival, the park was home to last month’s benefit concert Music for the Masses and will host Brewgrass, a bluegrass/beer event, in September. Another benefit concert also is slated there in late September.

And the park always is the site of the Jaycees’ Independence Day fireworks show and accompanying activities.

Jacki Becker, who is organizing the Bleeding Kansas festival, has helped promote several shows at Burcham through the years, including the Warped Tour in 1998 and the Tattoo the Earth tour in 2000.

“It’s great,” she said of the venue. “I had kind of forgotten how beautiful it is. (Wednesday) it was about 105 degrees, but there’s a breeze and lots of shade.”

City officials say they rarely have problems with concerts at Burcham Park.

“I’m not sure how it ended up this way, but that’s become the park where everybody wants to do these types of events in,” said Tim Laurent, Lawrence Parks and Recreation facility operations supervisor. “We haven’t had any problems, but it’s something I’ve worked pretty hard at to make sure we haven’t. I really don’t want to upset anyone in the neighborhood.”

Concert promoters must obtain a special-use permit to host events in city parks, and the cost depends on the type of event being held. Though the final amount hadn’t been set, Laurent expects the Bleeding Kansas festival to pay a $400 fee to use the park for the day.

Promoters also must get approval from the city clerk’s office and state if they’re going to sell alcohol. The city also requires portable toilets and, depending on the size of the event, may require security.

Concerts must be over by 10:30 p.m. because of noise, and Laurent says he always has a conversation with organizers about proper language.

“That’s something we cover,” he said. “We’ve got to have that frank conversations with these groups that they can’t start dropping the ‘f-bomb.'”

More about the concert

Marilyn Roy, who lives about a block from the park, says she can hear the concerts well.

“But I also hear KU reverberating when there’s something going on” at Memorial Stadium, she said.

Her main concern about the concerts is trash pick-up and oversight of alcohol consumption. But she says she generally doesn’t worry too much about the events.

“If it’s something that’s drawing people to the park, and they’re enjoying it, I think it’s a good thing,” she said. “I don’t see any impact at all that’s negative.”

Steve Braswell, Pinckney Neighborhood Assn. president, says parking is among his chief concerns, though organizers of some larger events have arranged to park cars at the Veterans of Foreign Wars, 138 Ala.

He gives credit to the Bleeding Kansas organizers for distributing fliers last weekend throughout the surrounding neighborhood alerting residents about the concert.

“I think that’s what all the groups ought to do,” Braswell said. “It’s not like this is at a stadium. There are a bunch of houses around. It’s real decent to talk to the neighbors.” 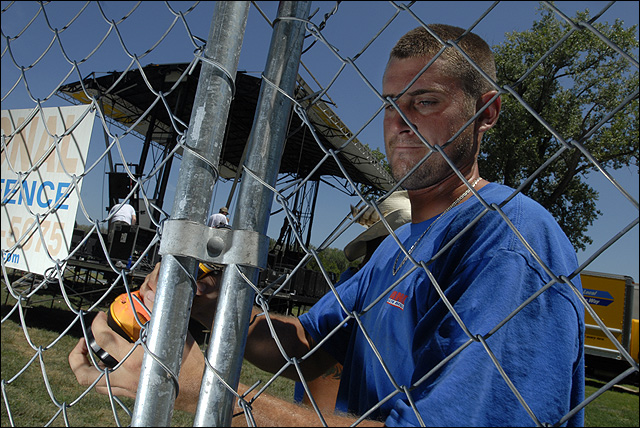 Zach Nettleton, Blue Springs, Mo., of National Construction Rentals, works to secure a fence beside one of the concert stages Friday afternoon at Burcham Park.

Becker, the Bleeding Kansas organizer, says crews will be out tonight to clean up in the park and will canvass the neighborhood Sunday to pick up trash.

She alerted the neighborhood association early on – and even offered them tickets – as a goodwill gesture.

“This is something we want to do every year,” Becker said. “Having the Pinckney (neighborhood) blessing is fantastic.”

Laurent, the parks official, says the city’s parks master plan includes an amphitheater on city-leased land near Clinton Lake. If that is built in the future, city leaders may urge concerts like today’s to be held at the amphitheater.

Becker says she would be open to that possibility. But for now, she’s enamored with Burcham.

“There’s something to be said,” she said, “for having trees and seeing the river.”