Nat Caron, like more than half of today’s teens, carries a cell phone.

The 15-year-old keeps a tiny, silver phone in his pocket to keep in touch with friends. But he’d gladly give up the device if he knew his parents could use it to track where he was at every second.

“That’s creepy,” he says. “We should have freedom.”

With Global Positioning System technology booming around the world, several cell phone companies have begun offering services that allow parents to locate their children’s cell phone locations through their own cell phones or by logging onto a Web site.

Depending on who you are, the technology might be a safety feature and way to keep your family connected, or an invasion of privacy designed to control children.

One such service, called Chaperone, was unveiled this summer by Verizon Wireless.

The service works this way: Children carrying the Migo phone (which allows them to dial only four pre-programmed numbers) can be located when parents log onto a password-protected Web site or call up a page on certain Verizon phones.

Parents also can set up “Child Zones,” pre-set zones children are allowed to be in. If they leave the zone, Verizon sends a text message to a parents’ cell phone, or to another designated phone. 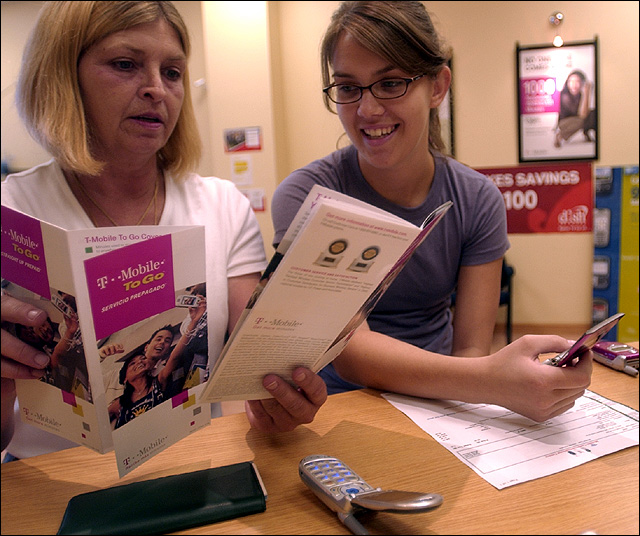 Toni Retonde, left, with her daughter, Jennifer Holladay, read over the details of a T-Mobile wireless service plan at a distributor downtown. New cell phone technology is available that allows parents to track their children via the Internet and GPS devices in their phones.

The service ranges from $9.99 to $19.99. Other companies, including Sprint/Nextel and Disney Mobile, have launched similar services.

“This is really designed for the busy family, to keep the lines of communication open,” says Cheryl Bini Armbrecht, a Verizon spokeswoman. “We’re really giving them and their children more freedom.”

But some who develop and study GPS technology aren’t so sure.

Jerry Dobson, a Kansas University geography professor and GPS expert, compares the cell-phone tracking to people living in villages where parents can constantly watch their children and know everyone their children interact with.

Many societies through history, he says, have tried to move away from that model.

“Looking back on my teenage years and even my childhood, doing things my parents told me not to do made me a better person,” Dobson says. “It lets you break molds and develop attitudes.”

He worries that parents might purchase the services without thinking about potential drawbacks.

“It’s a radical change in the parent-child relationship,” he says. “These people are glibly moving into that without thinking about the unintended consequences.” 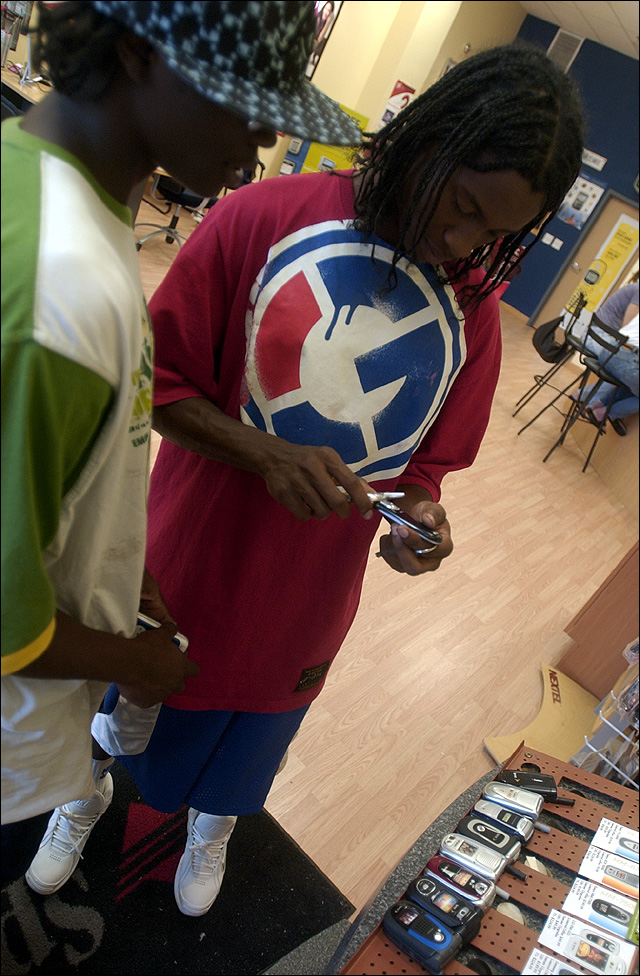 Pat Goodman, left, and Marcus Holman, both 17, check out the cell phones on display at the wireless distributor at 12th and Massachusetts streets. New cell phone technology allows parents to track their children's whereabouts via the Internet and GPS technology in the phones.

Those might include a suddenly estranged parent or employees of the cell phone company who can locate a child.

Another potential drawback was displayed by a Verizon representative last week. During a demonstration of the Chaperone service, the child locator said a cell phone was at Highpointe Apartments, 2001 W. Sixth St., even though the phone was actually 1.3 miles away at the Journal-World offices. A second search said the phone was “near Lawrence, Kansas.”

Dobson says a child might get in trouble for being somewhere he or she wasn’t.

“Any time you hand power over to someone, they’re going to abuse it,” Dobson says. “It’s going to come back to bite you.”

Tim Hibbard also is skeptical of the cell phone tracking technology for parents.

Hibbard is software architect for EnGraph, a Lawrence company that uses GPS to create mapping and billing programs for transit systems.

Hibbard also is a blogger who maintains a Web site called “Where’s Tim Hibbard?” where computer users can see Hibbard’s location at any time.

But he has issues with the parental cell phone tracking. The difference between what he does and the parent cell phone system, he says, is he chooses to broadcast his location; children might not have that choice.

He compares the parental option to “big brother.”

“We’re certainly trying to avoid that” at EnGraph, he says. “We’ve had a lot of requests to use GPS to track kids, and we always turn those down. We think those contribute negatively to GPS. We try to show how it can help people in their everyday lives and from a social networking standpoint. You have to give people a good reason to take away their privacy.”

But Armbrecht, the Verizon spokeswoman, argues that the Chaperone service is more about safety that privacy. If parents introduce it to their children that way, she says, they won’t see it as an invasion of privacy.

“Obviously,” she says, “having a phone is a privilege for children.”

Hibbard says he thinks the United States is a few years away from having a major conversation about appropriate uses of GPS technology.

Social GPS services that alert you when you’re close to one of your friends, or services that remind you of your grocery list if you’re driving by the supermarket could be popular in the future, Hibbard says.

But some parents say they don’t need to wait for GPS technology that appeals to them.

Rose Foster, a single Lawrence mother with children ages 12 and 16, says she thinks the cell phone trackers are a good idea. Both of her children have cell phones, though they don’t yet subscribe to a GPS service.

“Absolutely,” she says. “It gives you a little extra peace of mind.”

Her 16-year-old son, Sam, says he wouldn’t worry too much about getting in trouble with the system.

But, he adds, “It sounds pretty crazy to me.”