Up until recently, the title of this film was “Flight 93.”

But the subtle move of altering it to “United 93” endows the picture with so much more depth.

Aside from being a specific reference to the airline itself, the rewording brings a new unity to the enterprise. United in a singular goal. United in battling a common enemy. United States.

Sure, that’s a lot to read into one little movie. But this is a project that has cranked emotions to the boiling point before anyone has even seen a frame. In fact, the reaction of audiences to the advance trailer was so strong that Universal Pictures replaced it with a featurette about the making of “United 93.”

Viewers who decide they are “ready” to see this docudrama will be subjected to an excruciating look at the real-time events surrounding the 9-11 flights. It is riveting, anger-inducing and often heart-rendingly sad.

Writer-director Paul Greengrass (“The Bourne Supremacy”) supplies a you-are-there immediacy that seamlessly blends the facts of the infamous day with speculation as to how the parties on the doomed flight might have reacted.

He makes an interesting choice right off the bat by starting the film from the four hijackers’ point of view. We hear them praying as they prepare to leave their hotel rooms for the airport. The worried leader calls someone on the phone and says, “I love you.”

These men don’t look like killers; they come across as slight, unimposing college students.

Cut to Ben Sliney (playing himself), who is enjoying his first day as the Federal Aviation Administration’s new operations manager. (How’s that for a can’t-possibly-be-true start to a career?)

Then it’s on to the pilots, flight attendants and passengers as they arrive in Newark, N.J., where Flight 93 originates.

For the first hour, the film cross-cuts between the mundane chores of air travel and an increasingly fascinating procedural as the controllers and military authorities assess the mounting catastrophe.

But when the terrorists take control of the plane, “United 93” soars into loftier territory.

The film can take its place alongside movies such as “Black Hawk Down” or Touching the Void” – other modern tales about horrific events that happen to decent-yet-unprepared individuals. These works are far more viscerally than intellectually effective when relaying their stories. They somehow tap into the primal core of trying to escape a potentially inescapable dilemma.

It’s hard to conceive how another filmmaker could improve on Greengrass’ version of this piece of recent history. His approach is just so right for the material, from the use of a completely unknown cast of actors (which includes some of the actual ground crew) to a hand-held documentary look to the action. 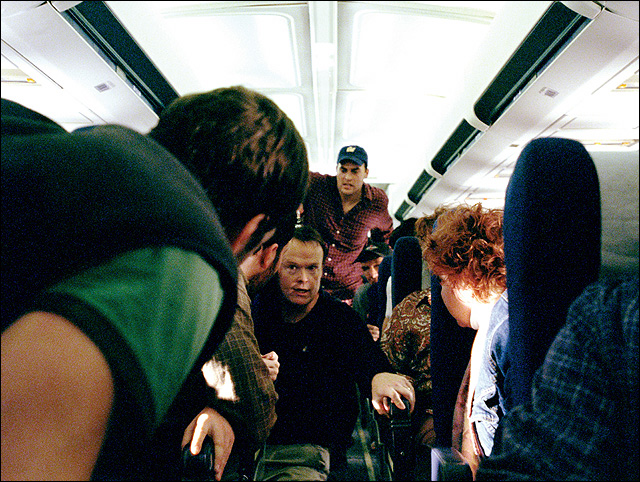 Passengers of United Airlines Flight 93 prepare their retaliation plan in the unflinching drama 'United 93' from writer/director/producer Paul Greengrass. 'United 93' will be released in theaters on April 28, 2006.

The only thing that really limits the picture is how much of the behavior of the principals is left to conjecture – and how the ending is a forgone conclusion.

If this were a “Hollywood” action blockbuster of a fictional event, the finale would invariably involve the commuters wresting control of the plane from the hijackers and landing safely. Then the heroes would tearfully reunite with their loved ones.

But it doesn’t always work out that way in the real world. And a viewer of “United 93” can’t help but come away with the feeling that the very act of depicting the events with such detached frankness makes for a far more gripping experience than any cinematic embellishments might provide.