The “American Dreamz” commercial that ran during Wednesday’s telecast of “American Idol” was curiously vague.

The trailer basically gave no hint what the plot was about and didn’t even imply whether the movie was a comedy or drama.

Yet “Idol” has become so entrenched in pop culture that there was no doubt the film was a parody of the TV show. Just from the brief images of the actors, a viewer could correctly deduce it consisted of a smug host, a ruthless starlet and an outsider runner-up.

But rather than just deliver a predictable story of egos and backstabbing, “American Dreamz” takes the concept to the next level with a plot that involves a Middle Eastern contestant (Sam Golzari) who is part of a terrorist cell and a dimwitted U.S. president (played by Texan Dennis Quaid) who becomes a guest judge on the show.

The film is tailor-made for the vast audience that can’t wait to watch Fox’s “Idol” each week while still intellectually grasping what a glossy hunk of junk it is.

One can’t have an “Idol” send-up without its central figure, Simon Cowell, and Hugh Grant slides comfortably into the role. Grant’s producer/host is first introduced while abruptly breaking up with his adoring young girlfriend. 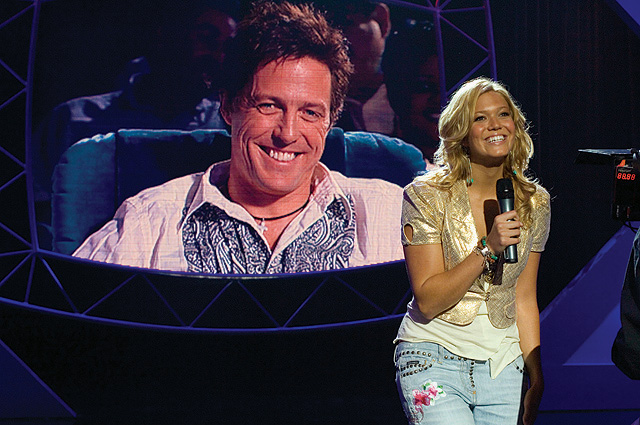 Hugh Grant, left, portrays a self-loathing TV host and Mandy Moore is his favorite contestant in the comedy American

His “American Dreamz” series is once again dominating the ratings, which makes it even more imperative that the ante is upped for the new season.

“Bring me some freaks,” he instructs his staff.

The result is a fresh cast where singing abilities are secondary to individual backstories. That’s why it’s crucial that Mandy Moore’s character – an ambitious blonde from Padookie, Ohio – reunites with her recently dumped boyfriend (Chris Klein), an Iraq war veteran who was wounded in combat.

It also explains why the “Arab” contestant succeeds despite his preference for rendering showtunes while dressed like Sgt. Pepper. And why a Hasidic Jew (Adam Busch) is selected as his fellow competitor.

By the time the finale comes into play, there are so many plotlines – a marriage proposal, an affair, a suicide bomber, a president going off script – that it’s impossible to figure out how the movie is going to pull everything together.

Writer-director Paul Weitz (who previously teamed with Grant in “About a Boy”) sometimes goes a bit overboard with the political satire, but the picture is never dull and often hilarious.

It’s kind of a throwback to Weitz’s “American Pie” days when the anything-for-a-laugh mindset sometimes trumped good taste. There’s no denying the story features less emotional connection to its characters than “About a Boy” or Weitz’s previous “In Good Company.” This is a film about eccentric performances (Quaid and Moore are the standouts) and constant punch lines.

Much of the latter comes at the expense of the White House, where the newly re-elected prez decides he’s tired of all his thinking being done by the chief of staff (Willem Dafoe made up to look like Dick Cheney). When the leader has the radical thought to actually read The New York Times, Dafoe walks in and asks, “What’s with all the newspapers? New puppy?”

For all its surface bravado there is something undeniably “safe” about “American Dreamz.”

It could be because there is no clear-cut villain. The smarmy host, the gold-digger contestant and even the bomb-loving terrorists all have a soft side – sort of. At the very least the movie gives them distinct motivations for their actions.

Maybe the flick desperately needed an R-rated attitude instead of a more congenial PG-13. 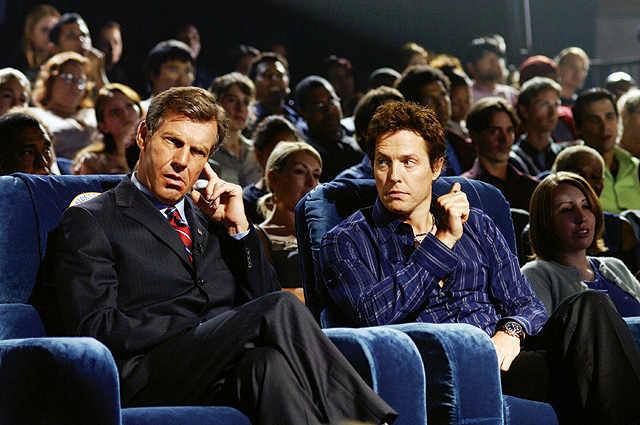 Or perhaps it’s hard to successfully lampoon a presidential administration that with each passing month mires itself deeper in self-parody.