'I thought I would never sell it'

The 568-square-foot cabin with narrow concrete stairs, outdoor shower and an incinerating toilet in the bedroom may not be the first place a home hunter would want to drop nearly $160,000.

But the Lone Star Lake abode might be a bargain for fans of the famous Beat Generation writer William S. Burroughs, author of “Naked Lunch” and “Junkie.”

Burroughs, who died in 1997, mentioned the cabin in his book “My Education.”

Carol Dengel, current owner, listed the cabin on eBay March 22. Dengel, known as lakefrontcarol on eBay, put the cabin for sale as a collector’s item.

And with more than 1,600 hits on her page, Dengel may be on the right track to finding a buyer.

Robert Atwater, of England, recently contacted Dengel about the cabin, she said. He told Dengel he hoped he would be able to visit the property sometime this month.

“He called and left a message on my answering machine.” she said. “My kids were fascinated that somebody from England was calling about that cabin.”

Dengel first came into contact with the cabin in 1999 when she and Diane Fry, an old high school friend from Ottawa, decided to buy a cabin near the lake where they could spend weekends with their families. 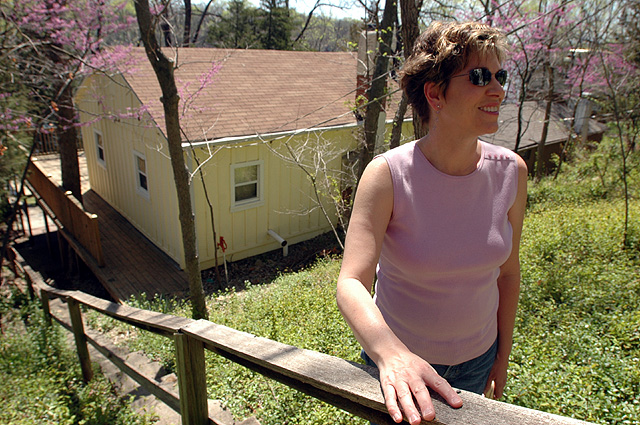 Carol Dengel, of Overland Park, has something she wants to sell on eBay: a Lone Star Lake cabin once owned by the late author William S. Burroughs. Dengel, who is asking about 60,000 for the abode, is pictured on Wednesday at the lake-front property.

She said houses in that area were rarely ever listed for long. Often owners would simply sell to friends or family, or agents would quickly purchase the property and then sell it to someone they knew.

When 638 E 582nd Road became available, Dengel and Fry learned from a friend that it was for sale. When Dengel learned who the previous owner was, she knew she had to have it.

“I used to come here as a kid, so I wanted a place near the lake. When we found out who it belonged to we bought it for the asking price right there,” Dengel said.

She declined to say what she paid for the property, but the county appraiser lists the current value as $66,100, far less than the asking price now.

As part of the purchase agreement, Dengel and Fry had to buy the cabin as it was.

“It was in major disrepair,” Fry said. “My husband, Kent, spent a lot of time cleaning it up. We redid every inch of that cabin.”

Dengel said that she didn’t think Burroughs used the cabin much in his later years, but that many of his acquaintances did.

“It was unbelievable. I mean we hauled I don’t even know how many truck loads of junk. It was nasty when we bought it,” she said.

Among some of the items left were old bathing suits, garbage and dirty dishes. Some of the more valuable items – a desk and Burroughs’ boat – were removed by the sellers the day before the friends took ownership.

Over the next few years, the friends with their families and help from others made about $40,000 in repairs, adding new features, including a deck near the house and next to the water, new windows and new appliances.

Three years ago, Dengel bought Fry’s half of the house while Fry and her husband bought two bigger cabins up the lane. 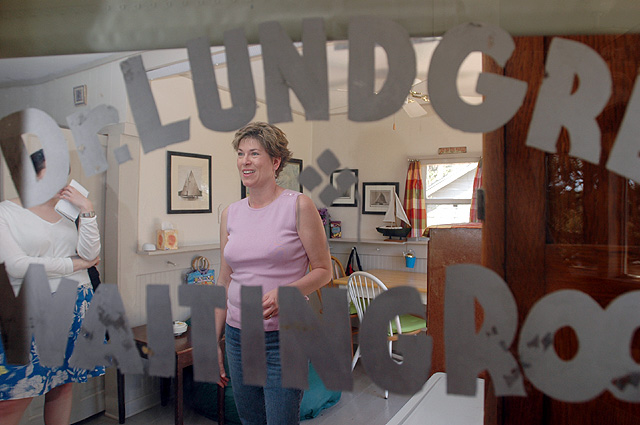 Dengel shows the interior of the cabin. She says it was nasty when she bought it but that she and her husband redid

But the cabin had its downside. It was small enough only that she her husband and two children could sleep in it.

Then she met a collectibles salesman on an airplane who told her eBay was where collectibles sold. She decided to sell the cabin and purchase one of the larger cabins the Frys bought.

“They get a good-friend discount on the 2nd,” she said.

This isn’t the first time items once belonging to Burroughs have made their way to eBay. In April 2000, the Journal-World reported stolen items from Burroughs’ estate were being sold on the online auction. The items included identification cards, credit cards and prescriptions. After Burroughs’ death, his estate went to James Grauerholz, a longtime friend and editor.

Burroughs died of a heart attack at Lawrence Memorial Hospital on Aug. 2, 1997.