Tricky ‘Slevin’ not just by the numbers

A chatty man in a wheelchair (Bruce Willis) corners a young stranger in a deserted airport terminal and begins telling him about a crime caper from the 1970s. It involves horse racing, debts to bookies and brutal murders.

The story all leads to a “Kansas City shuffle.”

“That’s when everyone looks right. You go left,” he explains … before he snaps the man’s neck.

Such is the mantra of “Lucky Number Slevin,” a clever comedic-thriller that always seems to be one step ahead and to the left of the viewer.

The tale takes shape as “a bona fide case of mistaken identity.”

That case belongs to Slevin (Josh Hartnett), who drops by the apartment of an old friend – one who seems to have gone missing. Things start well when he successfully flirts with the charming next-door neighbor (Lucy Liu). Then he gets abducted by thugs.

Sporting a recently broken nose and clad only in a towel, Slevin gets thrown into the middle of a nasty war waged by rival New York City crime bosses. The Rabbi (Ben Kingsley) and the Boss (Morgan Freeman) are enemies who reside in facing penthouse buildings that have been remodeled into fortresses, unable to leave for fear of the other. 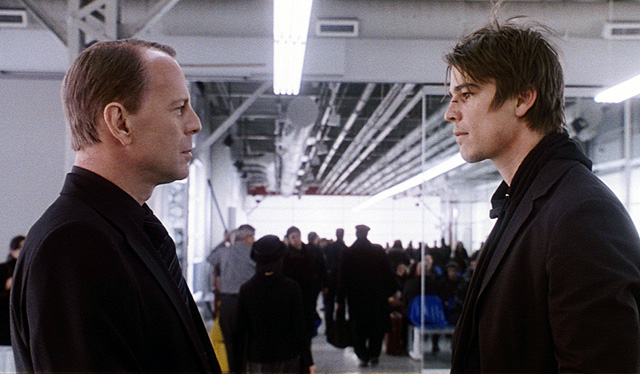 Throw in a dogged detective (Stanley Tucci) and a notorious assassin named Mr. Goodkat (Willis), and let the fireworks begin.

Fortunately, “Lucky Number Slevin” doesn’t struggle with its identity. What at first appears to be heading into Quentin Tarantino or Guy Ritchie turf steadily finds its own violent voice. The plot never quite goes where one thinks it will, leading to a twisty conclusion that frames the whole story in a new perspective.

Paul McGuigan, who directed the interesting-but-flawed “Wicker Park” (also starring Hartnett), proved with his previous movie that he can corral flashback-heavy material that is intentionally misleading.

Working from a sure-handed script by Jason Smilovic (who developed the TV series “Karen Sisco”), the film sports a crisp narrative and dialogue that isn’t too show-offy or a slave to pop culture references.

(A keen exchange finds Freeman describing his recently murdered son as “Relegated to the past tense. Sent from an ‘is’ to a ‘was’ before he even had breakfast.”)

The frequently bland Hartnett capitalizes on the promise he displayed in “Sin City” by delivering an ultralikable performance. His character’s motives and behavior often seem a bit of an enigma, but the audience wholeheartedly follows his lead.

Also memorable is Liu, who is at her most eccentric, sexiest best. Her character functions like one in a screwball comedy whose job is to become the X factor of the plot.

Not everything holds together, however. A particular glitch in the tale’s timeline implies the film was either developed 10 years ago or the studio wanted Hartnett instead of an actor in his 40s.

Plus, as provocative as the third act revelations are, there is something overly manipulative to the affair. It will be interesting to see whether the picture holds up to a second viewing after knowing the outcome.

It’s tempting to lump “Lucky Number Slevin” in with a lot of the more derivative movies in its genre, like “Be Cool” or the recent guilty pleasure “Running Scared.” Tempting, but ultimately unfair. 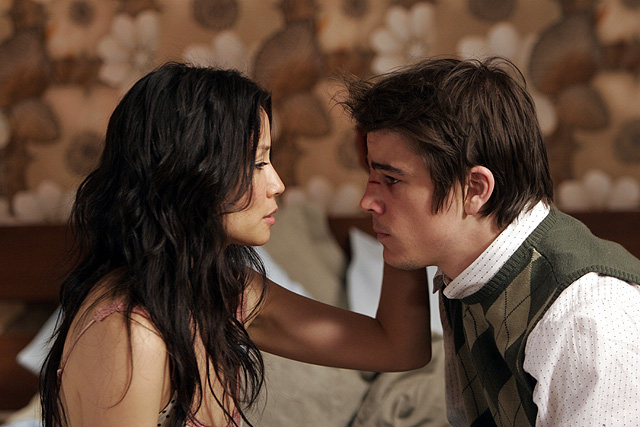 Perhaps the tale spun by that weird man in the bus station serves as a subtle counter to that reaction. When questioned about the integrity of his story, he replies:

“Charlie Chaplin once entered a Charlie Chaplin lookalike contest in Monte Carlo and came in third,” he says. “That’s a story. This is something else.”