Wichita ? Abortion foes are taking advantage of a seldom-used Kansas law that allows citizens to call for a grand jury investigation when they think local law enforcement agencies have failed to act.

On Friday, abortion opponents plan to present Sedgwick County with a petition signed by nearly 7,000 local residents asking to convene a grand jury to look at the circumstances surrounding the death of a mentally disabled Texas woman whose family brought her to Wichita for a late-term abortion.

“The deeper we looked into this case, the more we realized there was a lack of justice – a travesty that has been committed,” said Troy Newman, president of Operation Rescue in Wichita.

Kansas is one of the few states in the nation where citizens can summon a grand jury if they meet certain requirements in state law. Such a petition was used with limited success by pornography opponents in Wichita last year to get an indictment against a store selling adult sexual materials.

Under state law, a grand jury may be summoned within 60 days after a petition is presented bearing the signatures of slightly more than 2 percent of a county’s registered voters, said Whitney Watson, spokesman for the Kansas Attorney General’s Office. 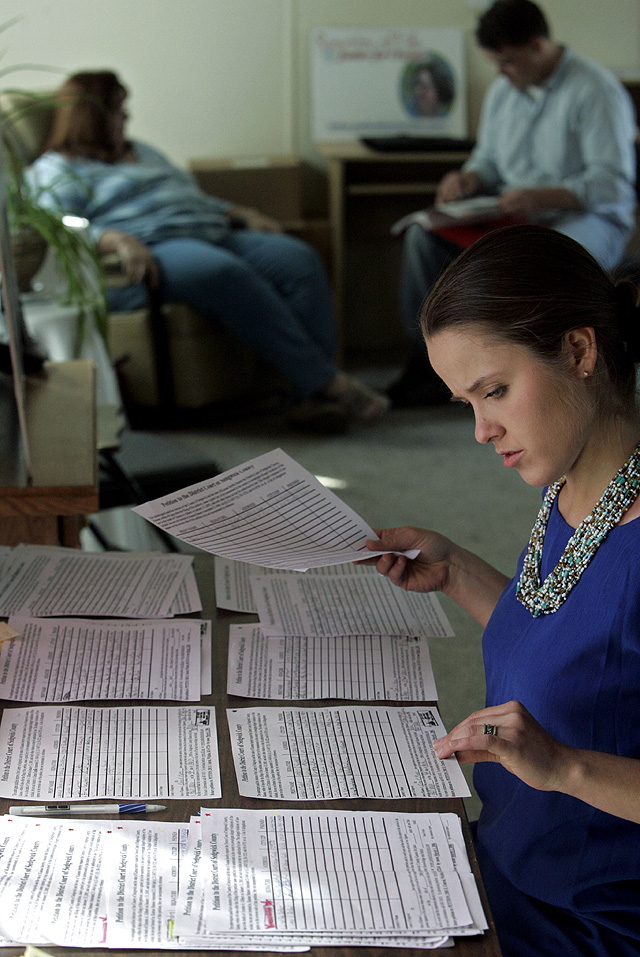 Karen Myers counts some of the 6,500 names on petitions to the District Court of Sedgwick County. The petition calls for a grand jury probe into the death of a mentally disabled woman who died in 2005 after having an abortion at a Wichita clinic.

Newman, a recent California transplant to Kansas, said he had never heard of such a law until David Gittrich, state development director for Kansans for Life, suggested it.

“It is a great tool. The legislative body had enough foresight to know the government is not always going to do its job,” Newman said. “It gives the ability to citizens to deliver justice when officials aren’t doing their job.”

The effort to summon a grand jury follows a ruling last year from the Kansas Board of Healing Arts that cleared Tiller of wrongdoing. While an autopsy listed complications from the abortion as the cause of death, the Board of Healing Arts, which regulates doctors, concluded neither Tiller nor his staff was responsible.

Anti-abortion groups questioned whether the board’s investigation was thorough because Kansas Gov. Kathleen Sebelius appointed many of its members and has received financial support in past campaigns from abortion supporters, including Tiller.

“We trust the Board of Healing Arts conducted a thorough investigation in this matter and we have no further comment,” said Nicole Corcoran, spokeswoman for Sebelius.

The woman, who suffered from Down syndrome, was 28 weeks pregnant when her parents took her to the Wichita clinic on Jan. 10, 2005, for an abortion. She died three days later from a massive infection. Activists contend proper medical monitoring of the woman’s condition should have found the infection and her worsening condition.

Their petition alleges violations of Kansas statutes, including involuntary manslaughter, mistreatment of a dependent adult, failure to report abuse of children and violation of abortion statutes.