Yellow caution tape still surrounds a gas station that was forced to shut down Friday after heavy rains caused its underground gas tanks to burst through the concrete in the parking lot.

The Miller Mart at 3300 W. Sixth St. remained closed Monday. A Kansas Department of Health and Environment spokeswoman said it was too early to tell exactly how much damage the mishap did to the soil and groundwater in the area.

KDHE spokeswoman Sharon Watson said the business’s owner would be required to complete a “site assessment” in coming days that would measure the extent of contamination in the area. But Watson said she believed that no water mixed with gasoline had left the site.

“The preliminary investigation determined that the gas that released from the tanks was very little. We believe it’s contained in the earthen basin where the tanks were,” she said. 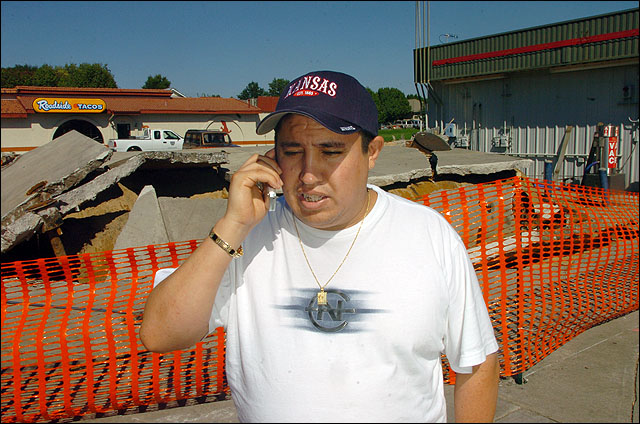 Angel Alvarez, shown on the phone in business discussions, plans to relocate his restaurant, Tortas Jalisco, following an accident at its former location, the Miller Mart, 3300 W. Sixth St.

Dale Miller, the business’ owner, did not return a phone call Monday.

Tortas Jalisco, a Mexican restaurant inside the gas station, was forced to close after the accident. But the restaurant’s owner, Angel Alvarez, said Monday that he was moving his business to the former site of Roadside Tacos, a restaurant just north of the Miller Mart that closed in recent months. Alvarez said he’d been planning to find a new location anyway, but the accident forced him to accelerate his schedule.

He said he expected the move would cost at least $20,000 and that he planned to eventually use the new space as a dance club during the evenings.