Pair face years in prison, millions of dollars in fines

The jury deliberated for 7 1/2 days before reaching the verdict. The panel of 10 women and two men received the case late Aug. 24 after prosecutors and defense attorneys made their closing arguments 10 weeks after seating the jury. Testimony about whether the government can recover money from the executives is expected to start today.

It was the former executives’ second trial. Their first ended in mistrial last year after jurors were unable to reach a consensus on more than half the charges. 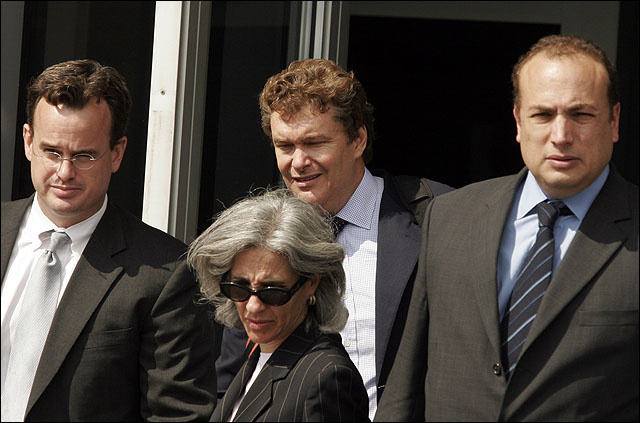 Prosecutors claimed the men, who were forced out of Westar in late 2002, engineered extravagant salaries and benefits for themselves at the expense of shareholders, hiding much of their actions from the company’s board of directors and federal regulators.

Wittig, 50, and Lake, 55, stared blankly ahead as the verdicts were read. Wittig at times stared at the jurors, but few if any made eye contact with him.

Attorneys on both sides refused comment because the forfeiture case still has to be tried.

At Westar Energy, the reaction was restrained. Spokeswoman Karla Olsen said only that company officials planned to continue following the case.

Prosecutors say the men regularly used company planes for vacations and other private trips, attempted to secure huge windfalls from a proposed merger with a New Mexico utility and spinoff of Westar’s nonregulated subsidiaries, abused a program that paid executives for relocating to Topeka and used Westar lawyers to rid the board of directors of their critics.

The duo denied the charges, saying their actions were legal, approved by the company’s directors and disclosed in corporate filings.

Dan Lykins, a Topeka attorney who had been critical of Westar’s Wittig-led management, said Wittig and Lake’s actions were most damaging to retirees who had bought Westar stock, expecting it to generate stable dividends for them to live upon. Lykins, who owns about 3,200 Westar shares, unsuccessfully sought a seat on the utility’s board of directors last year.

“I feel sorry for Wittig’s and Lake’s families, but I sure don’t feel sorry for them,” Lykins said. “They deserve everything they’re going to get from the court.”

David Springe, chief attorney for the Citizens’ Utility Ratepayers Board, a state agency that advocates for residential and small-business utility customers, noted that Westar’s critics raised many of the issues that eventually became part of the criminal case during regulatory hearings in 2001 and 2002.

“If you look at Westar as a utility, a small Midwestern utility, at the time, certainly the types of money being spent, it really didn’t seem to mesh with our Midwestern values and common sense,” Springe said.

Work experience: After graduating from KU, worked for Kidder Peabody brokerage firm and Salomon Smith Barney before joining Westar in 1995. Became chief executive of Westar in July 1998. Resigned from Westar in November 2002.

After Wittig and Lake left Westar in 2002, its new management, under pressure from regulators to improve Westar’s finances, abandoned Wittig’s strategy of diversifying the company. Critics had said that strategy – most notably a rapid expansion into security alarm services – hurt Westar. Westar sold non-utility assets and cut its corporate debt by more than half.

Wittig and Lake are in arbitration with Westar over the former executives’ claim that the utility owes them tens of millions of dollars under their employment agreements. Springe said the two men’s convictions should help Westar’s position.

¢ Conspiracy, one count. Punishable by up to five years in prison and a fine of up to $250,000. Both Wittig and Lake guilty.

¢ Circumvention of internal accounting controls and failing to implement such controls, 14 counts. Each count punishable by up to 10 years and a fine of up to $1 million. Wittig guilty on all counts; Lake acquitted on one count.

¢ Wire fraud, seven counts. Each count punishable by up to 20 years and a fine of up to $1 million. Wittig guilty on all counts; Lake acquitted on one count.

¢ Engaging in monetary transactions in property derived from unlawful activity, 17 counts. Punishable by up to 10 years and a fine of up to $250,000. Wittig guilty on all counts; Lake acquitted on seven counts.

¢ Forfeiture, one count. Government seeks to force Wittig and Lake to return all compensation they received while at Westar and other property, including Wittig’s Topeka residence, the former home of Kansas Gov. Alf Landon, and nearly $2 million in furnishings. Testimony on this count is expected to begin today.