On the morning of Aug. 6, John and Rosie Elmore found the mutilated remains of their dog in the backyard of their southwest Lawrence home.

The scene was too difficult for Rosie Elmore to take in.

“I didn’t get close to it, but my husband did. I knew it was bad,” she said as she recalled the incident recently.

Neither the Elmores nor their neighbors heard any unusual noises the night the 15-pound West Highland terrier they called Noel was killed. But a few months ago Lee Beth Dever and her husband, Michael Dever, were awakened by a dog barking somewhere in their neighborhood.

The barking soon turned to into a blood-curdling wail.

“It was the most God-awful wailing, crying and screaming,” Lee Beth Dever said. “It was so disturbing that at the time we actually thought, ‘Gosh, someone is beating their dog.'”

Several residents who live in the area of Alvamar Golf Course and Country Club and in neighborhoods just north of Bishop Seabury Academy think some type of animal is attacking and killing small dogs and cats that have been left outside overnight. It’s been going on for several months, they said.

At least three dogs have died under mysterious circumstances, including the Elmores’ dog. Neighbors also said cats have disappeared or been found dead. 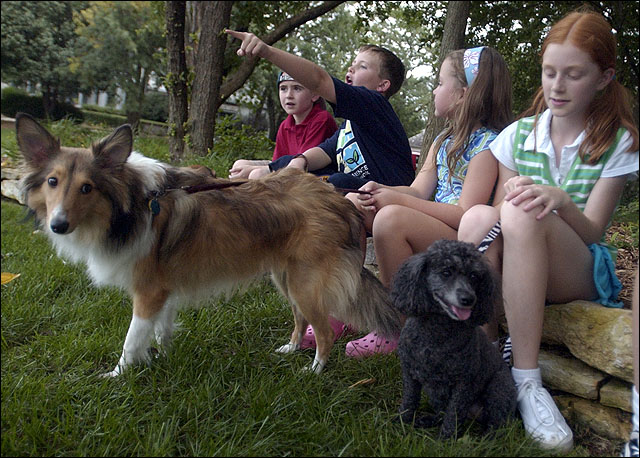 Dogs Lincoln, a sheltie, and Trixie, a poodle, are shown off by their owners, from left to right, Sean McSweyn, James McSweyn, Tess McSweyn and Katie Gaches. Residents in their neighborhood are concerned about stories of pets being attacked.

“We’ve been bringing our cats in at night,” said Susan Stuever, who has found small animal remains during morning walks in her neighborhood and around Alvamar.

“My dogs will pick stuff up when we’re out walking and you can tell it’s the leftovers of something,” she said.

The most common theory among the neighbors is that a mountain lion or a bobcat is the culprit.

“I think there needs to be some sort of evaluation of the wildlife in this neighborhood,” Dever said.

The Elmores notified police and animal control officers about the death of their dog. It is the only such incident in that area reported to them, police spokesman Sgt. Dan Ward said.

Police and animal control do not handle wild animals and refer such incidents to the Kansas Department of Wildlife and Parks.

There have been several bobcat sightings in areas of western and southern Lawrence the past few years. Earlier this summer a dead bobcat was found near 31st and Louisiana streets. A bobcat and her kittens took temporary refuge under a shed in another neighborhood.

All the talk about small animal deaths is a concern to Joan McSweyn, who along with her husband, Donald, and their three children moved into a residence near the Elmores just a month ago from Las Vegas. They have a sheltie dog.

“We don’t let him out unless we go with him,” Joan McSweyn said. “In Vegas we were used to having walls. Here everybody has an (underground) electric fence. That keeps your animal in but it doesn’t keep other animals out.”

Late on the night of Dec. 27, 2003, Sarah Merriman let her dachshund outside, intending to let it back in a few minutes later. She suddenly heard her dog yelping as if it was hurt. She rushed outside and found the dog in a nearby dry creek bed.

“I think whatever it was was carrying (the dog) and I must have scared it away,” Merriman said of the incident, which occurred while she was living in the Quail Creek Drive area just north of Clinton Parkway.

The dog was badly injured and, despite the efforts of a veterinarian, died the following day, Merriman said.

Merriman called the Prairie Park Nature Center and was told the attacking animal may have been a coyote.

“We had since then heard lots of coyotes running up and down the creek,” Merriman said. “It must be their little roadway.”

Merriman now lives in a house built farther west along Inverness Drive. When the house was under construction several bobcat sightings were reported by construction workers, she said.

Several months ago a beagle belonging to Matt Harms and his wife, Christy, disappeared out of their yard, which had an electric fence. Matt Harms also found his dog in a nearby dry creek bed. Harms said it didn’t appear to him that the dog had been attacked. But the only thing he can think of that would have killed it was a malfunctioning shock collar.

Jeff Clouser, a KDWP officer who lives in Lawrence, doubts that a shock collar, even a malfunctioning one, would kill a dog. But he said he would have to see an animal’s remains before offering a theory as to what might have killed it.

Bobcats rarely attack dogs, though they might attack a cat if it thought its territory was being invaded, Clouser said. As for a mountain lion, they rarely attack unless it’s for food or self-defense, he said.

There are a lot of things that could attack and kill cats, such as hawks or horned owls, Clouser said.

“It’s just hard to tell without seeing it,” he said, of the dead animals.

Although there are reports from time to time, there have been no confirmed sightings of mountain lions – sometimes called cougars or panthers – in the Lawrence area, but Clouser said he wouldn’t be surprised if there are some here.

“I’m not doubting that there is a possibility, and I think it’s just a matter of time (before one is confirmed)” Clouser said. “But we have not been able to confirm a sighting.”

Clouser doesn’t think people need to worry about being attacked by either a mountain lion or a bobcat. As for small pets, if owners are concerned they should keep them inside, especially at night.

Bobcats have periodically been seen over the years in the tree lines around Alvamar, according to maintenance workers. There have been reports of a mountain lion seen on Kansas University’s west campus.

Alvamar landscape supervisor Chris Habeger thinks it was a mountain lion he saw one afternoon in July as he was about to finish mowing property near Lake Alvamar – formerly known as Yankee Tank Lake – just off of Clinton Parkway but well west of the golf course. Habeger recalled making a right turn on a riding lawn mower and then being startled to see the big cat behind him. It was only about 10 feet away, he said.

Habeger said he saw the animal walk a short distance and sit down near a treeline.

“It looked very confident, assured,” Habeger said. “I was going to take a final cleanup lap but I decided not to.”