East Liberty, Ohio ? Selling cars powered by natural gas to American drivers is no small challenge for Honda Motor Co. Natural-gas stations are few and far between, and until recently the vehicles were nearly as expensive to fuel up as their gasoline-powered counterparts.

Now gasoline prices are up about 60 cents a gallon from a year ago and motorists can buy a device that allows them to get natural gas fill ups at home. Honda plans to expand sales of the natural gas Civic GX next year to major cities around the country.

The automaker, which makes the car in East Liberty, Ohio, hopes to triple its retail business – going from about 500 cars this year to 1,500 in 2006.

“The market is coming to us,” said Gunnar Lindstrom, head of Honda’s alternative fuels division.

But, many of those who buy natural cars aren’t driven by their pocketbooks. They like the idea of having a cutting-edge car that’s less polluting and doesn’t rely on foreign oil for fuel.

And Lindstrom said the car was being marketed as a secondary, commuter car. 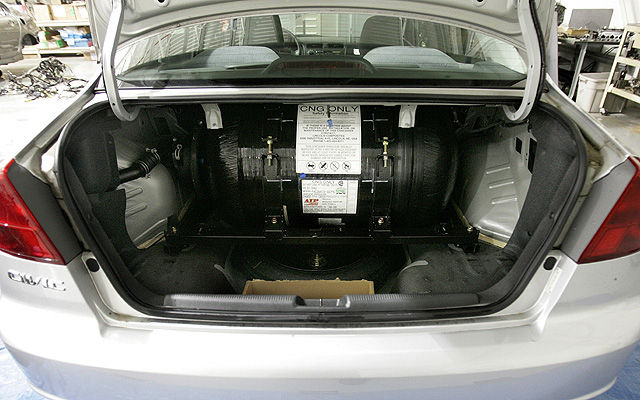 The gas tank is stored in the trunk of Honda's natural-gas powered Civic GX. With gasoline prices up 90 cents a gallon from a year ago, motorists are able to get natural gas fill ups at home. Honda plans to expand sales of the natural gas Civic GX next year to major cities around the country.

Automakers developed natural gas vehicles in hopes that their lower operating cost, cleaner burning fuel and non-reliance on foreign oil would create a market. By 2004, there were about 130,000 vehicles running on natural gas – most of them buses, government vehicles and commercial vehicles. By comparison, there were about 230 million gasoline-powered cars and trucks.

The scarcity of refueling stations kept sales of natural gas vehicles down, and some automakers abandoned their U.S. production.

Honda in April began selling the Civic GX at dealerships in California, where there are about 135 refueling stations available to the public and natural gas cars are allowed to use the less-crowded car pool lanes even with a single occupant. The automaker has sold about 475 of the cars as of Tuesday.

Then, Toronto-based FuelMaker Corp. began selling refueling machines that motorists can put in their garages. About 50 have been sold.

Fill ups have been a hurdle in sales of natural gas vehicles, which don’t have the range of gasoline-powered vehicles. The Civic GX can go up to 220 miles without refueling compared with 350 miles for the conventional, gasoline-powered Civic. There are about 600 public natural-gas refueling stations in the United States. 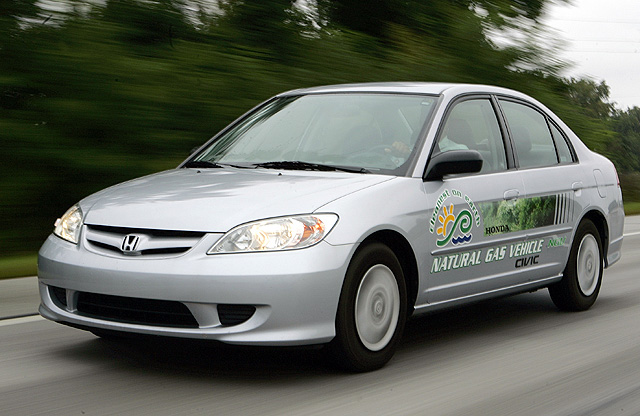 Honda's natural-gas powered Civic GX is seen on the road Friday, Sept. 23, 2005 near its plant in East Liberty, Ohio. Now gasoline prices are up 90 cents a gallon from a year ago and motorists are able to get natural gas fill ups at home. Honda plans to expand sales of the natural gas Civic GX next year to major cities around the country. (AP Photo/Kiichiro Sato)

“When we were kids, the ultimate dream was a gas pump at the house,” said Jeff Church, 49, of San Dimas, Calif., who bought a home refueling machine a few months ago. “Now, I’ve got it.”

The suitcase-sized machine compresses natural gas from the lines in the home and pumps it into the car. The process takes up to eight hours and can be done overnight.

Church, a United Airlines pilot, bought a Civic GX so he could use car pool lanes and avoid traffic jams. He’s assured of getting to the airport within 50 minutes. With traffic tie-ups, the 42-mile trip can take two hours.

In spite of rising prices, natural gas still costs less than gasoline on a national average.

According to the U.S. Department of Energy’s quarterly report on fuel prices released at the end of September, natural gas was 65 cents a gallon cheaper than gasoline. The price of natural gas is projected to rise this winter by as much as 50 percent – which could make it more expensive than gasoline – but could drop when demand eases after the winter heating season. 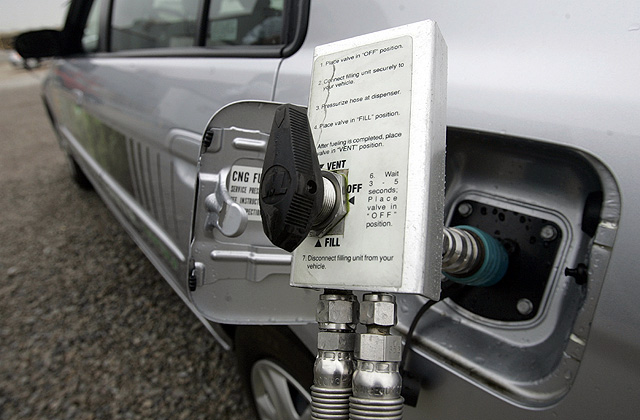 Natural gas is pumped into Honda's Civic GX, Friday, Sept. 23, 2005 at a Honda plant in East Liberty, Ohio. Now gasoline prices are up 90 cents a gallon from a year ago and motorists are able to get natural gas fill ups at home. Honda plans to expand sales of the natural gas powered Civic GX next year to major cities around the country. (AP Photo/Kiichiro Sato)

Automakers also have begun stepping up development of hybrid gasoline-electric vehicles to give customers more options in fighting higher gasoline prices. The hybrids have far outsold natural gas vehicles. For example, demand has grown to the point where Toyota Motor Corp. plans to raise annual production of its hybrids to 400,000 vehicles next year from 300,000 this year.

The Civic GX natural gas car looks, sounds and runs the same as a regular Civic. It costs $21,700 – $4,500 more than the basic, gasoline-powered Civic.

The higher purchase cost will be largely offset by increased tax credits and incentives contained in a federal energy bill that goes into law Jan. 1. The bill will provide a tax credit of $3,600 for the car and $1,000 for the home refueling machine, which costs about $3,500 plus $500 to $2,000 to install.

It also gives a $30,000 tax credit to someone who builds a public refueling station. A highway bill that goes into law Oct. 1 adds a tax benefit of 37 cents a gallon for those who sell motorists natural gas.

Colorado, Illinois, Louisiana, Maine, Rhode Island and Utah are among states that offer tax credits, which range from $1,500 to $4,000. A bill that would give a $2,000 tax exemption is pending in Massachusetts. Vacaville, Calif., offers up to $4,500 to anyone who buys a new natural gas car.

Experts say motorists’ fear of getting stranded on a long trip and the time needed to refuel at home could keep natural gas cars out of many American garages.

“There are a lot of people trying out alternative-fuel vehicles,” said Mark Bunger, principal analyst for Forrester Automotive, a technology research firm. Most of them do it, he said, because they hope it helps reduce pollution and makes the United States a little less dependent on foreign oil.