De De the boxer began to bound playfully as her owner, Kay Peiser, escorted her out of the show ring Saturday afternoon at the Douglas County 4-H Fairgrounds.

“She’s got a great personality,” Peiser said. “I can hand her to anybody here and let them show her. She would still win.”

While De De is only 22 months old, she has had a successful run as a show dog. 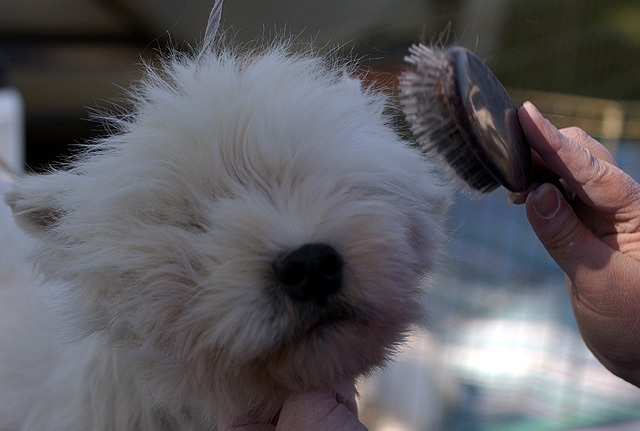 She’s ranked as the 17th best boxer in the country, Peiser said.

De De’s friendly nature makes her feel at home in front of an audience, Peiser said. De De lives with 10 other show dogs that Peiser trains.

“She’s a boxer, but sometimes she thinks she’s a poodle,” Peiser said.

The event’s judging program listed 804 dogs entered in the show.

Barks of all pitches echoed through the building at the fairgrounds Saturday, and several owners meticulously groomed their dogs in between showings.

Peiser said it was her first time entering the Lawrence show.

“It’s very pleasant. I’m very impressed with the facility. It’s a great place for a show,” she said.

Teresa Hudspeth, from Peculiar, Mo., had just finished judging a Working Group of puppies Saturday afternoon. She chose a 6-month-old Doberman pinscher as the winner.

Judging dogs is more about knowing high standards for each dog breed than comparing one dog with another in the ring, she said.

“His ring personality was superior, especially because he was only 6 months old,” Hudspeth said of the Doberman. “He wasn’t jumping around. He was very nice.”

The show will continue today at 8:30 a.m. and will last through the afternoon at the fairgrounds. It is free and open to the public.