What? Gasoline prices are dropping?

They are. And nobody knows that better than Gary and Jill Schwulst, who are traveling cross-country in a Winnebago. They stopped at the Citgo station at Ninth and Iowa streets Wednesday, fueling up on their way back to Tucson, Ariz.

“It started a couple of days ago. Wish it had done this when we started,” Gary Schwulst said as he waited on 50 gallons of regular unleaded to flow into the Winnebago’s gas tank.

The price of unleaded regular at Citgo in Lawrence was $2.56 per gallon on Wednesday. A month ago, the average price of regular gasoline in Lawrence was $2.95, according to Kansas AAA. In the days after Hurricane Katrina struck Louisiana and Mississippi, prices in Lawrence and elsewhere shot past the $3 mark.

Now AAA says prices everywhere are falling because American consumers have cut back on their demand for gas – and that has offset continued refinery outages in Louisiana and Texas. The national average has dropped 7 cents to $2.87 per gallon during the past week. 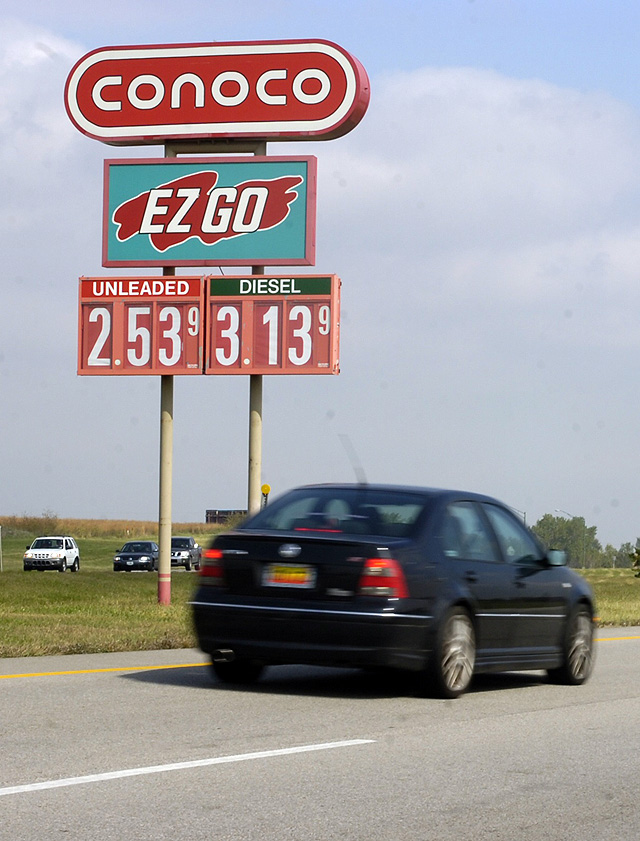 A car passes a sign advertising the price of fuel at the Conoco Station on Interstate 70 east of Lawrence. The station's gasoline prices are usually higher than those of the stations in Lawrence, but they have been lower in the past few days.

Last week’s report from the Energy Information Administration showed gas demand down by 2.6 percent for the preceding four weeks compared with the same period last year.

“We don’t know whether that is because people are driving fewer miles or how much of it is people driving with conservation in mind,” said Kim Mathewson, spokeswoman for Kansas AAA in Topeka.

Ironically, while prices in Lawrence have been dropping, they have dropped even faster at the Conoco station on the Kansas Turnpike east of Lawrence. Wednesday the price there was $2.47 per gallon for regular.

That dismayed Lawrence businessman Bob Schumm, one of those who noticed the price differences between the turnpike and stations in town. The price is usually higher on the turnpike than in town, he noted.

“It seems unusual that the Kansas Turnpike (station) would be a cheaper source of gasoline than our markets in town,” he said. “It makes one wonder.”

Mathewson had no explanation for price discrepancies, other than to say it generally depends on the price when a particular station or oil company buys its supply of gas.

To track local gasoline prices, go to aaa.kansas.com and click on the fuel price finder at the left side of the page. You can also check out the Journal-World’s “Pump Patrol” every day.

Wednesday the price of gasoline on the futures market was $1.85. Taxes and other fees add about 65 cents by the time it gets to the pumps, Mathewson said.

The Schwultses started their trip from Arizona to New Jersey to attend a wedding at the time when gas prices were skyrocketing. When told of the turnpike price, Gary Schwulst, who also drives tour buses for Arrow Stage Lines, shrugged.

“That figures. That’s the way our trip has gone,” he said.