Desire to save draws crowd to fairgrounds

The fair, held at the Douglas County 4-H Fairgrounds, gave more than 20 businesses and organizations a chance to set up displays and tout energy conservation equipment and technology.

Among those attending were Lawrence residents Sean Reel and his wife, Kate Claus, who made their way among the exhibits picking up brochures, fliers and other information.

They were not searching for anything specific, they said.

“In a couple of years, we may build (a home) so we’re looking for ideas,” Reel said. 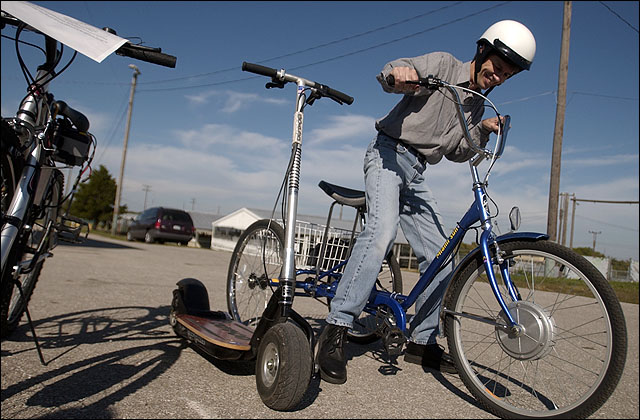 Although the couple want their future home to be energy-efficient and they are wary of high energy costs, they aren’t overly concerned about their current house.

Daryl Wesbecker, of Lawrence, also was collecting a handful of brochures.

“I’m looking for any ideas to stop the infiltration of outside air,” Wesbecker said of improving energy efficiency and lowering costs at his house.

Although dire predictions of high winter energy costs probably was a factor in interest in this year’s fair and homes tour, it always attracts a crowd, he said.

“We’ve had a pretty good turnout,” Pratt said. “People in Lawrence are interested in this.”

The fair also featured workshops and speakers on energy conservation. 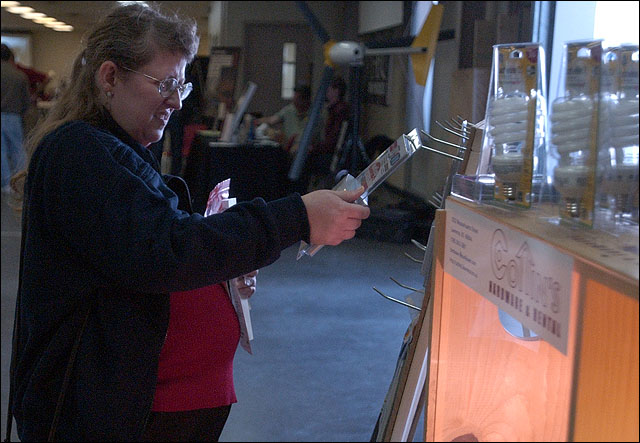 Dena Friesen, of Lawrence, checks out programmable thermostats on a display from Cottin's Hardware at the Lawrence Home Energy Conservation Fair in this October 2005 file photo. The fair was held at the Douglas County 4-H Fairgrounds and offered tips and products focused on saving energy.

Several solar and electric cars were on display, including a long, low-slung experimental solar car built by students at Kansas State University.

Kaedden Timi, president and founder of Earth Peace Systems, which had a display at the fair, said he thought high gas prices and heating costs were a wake-up call to consumers.

“I tend to value it because it reflects the actual cost of fossil fuels,” Timi said. “It’s already expensive and it’s going to get worse.

James C. Horlacher was providing information about financial investments in energy conservation technology. His company, First Affirmative Financial Network, is based in Mission.

“A lot of that technology is going like gangbusters,” Horlacher said. “A lot of this is just in its infancy.”

Yet Horlacher noted that because the technology is new, there is an element of risk involved for investors.

“It’s not for everybody, but there is interest,” he said.