A crime for all time

KU student who killed family one of state's last executions

He was known as a mild-mannered, sophomore zoology major who played the bassoon in the Kansas University band.

But in 1958, while he was home for the Thanksgiving holiday weekend, 18-year-old Lowell Lee Andrews shot and killed his parents and his older sister.

He was one of the last to be executed in Kansas.

“Why, he was the nicest boy in Wolcott,” a stunned neighbor told a newspaper reporter at the time, referring to the northwestern Wyandotte County town where the Andrews family lived.

Even today, nearly 50 years later, the mystery surrounding what set off the normally quiet Andrews remains.

Gordon Dale Chappell Jr. remembers what his father’s impressions were of Andrews. Gordon Dale Chappell Sr. was the Douglas County Sheriff at the time Andrews killed his family. The senior Chappell assisted Wyandotte County with the investigation and supervised a search of the Kansas River in Lawrence for a rifle and a pistol Andrews used in the shootings. 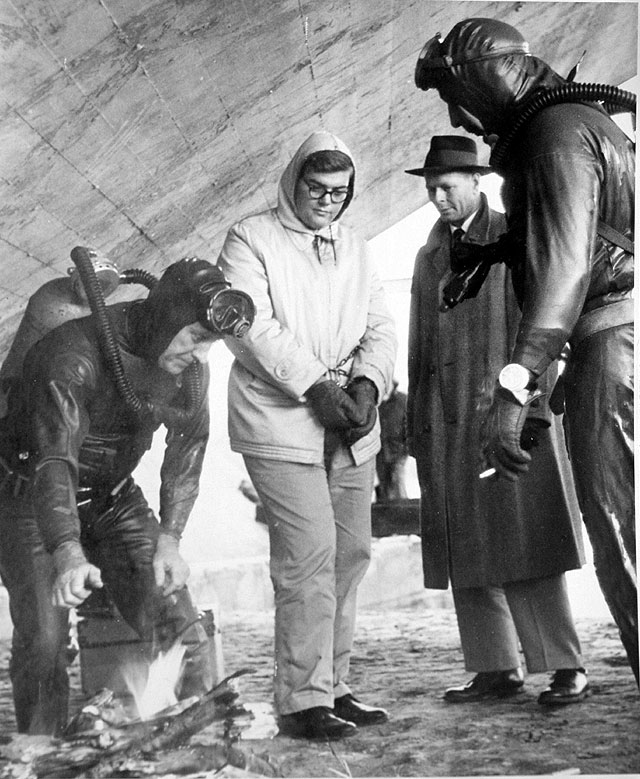 Lowell Lee Andrews, center, stands as officers and divers search the Kansas River for parts of guns Andrews used to kill his parents and sister on Nov. 27, 1958. Andrews, then a mild-mannered, 18-year-old Kansas University sophomore, was one of the last criminals to be executed in Kansas.

“He said Andrews was always very polite,” said Chappell Jr., a Lawrence resident who was 13 at the time of the murders. “But Andrews showed no remorse, I do know that.”

Indeed. In the Lansing Correctional Facility moments before Andrews was hanged at 12:01 a.m. on Nov. 30, 1962, there was no sign of repentance, according to an Associated Press story in the Lawrence Daily Journal-World. Andrews declined to offer any last words and even was smiling slightly, AP reported.

“I really liked Andy. He was a nut – not a real nut, like they keep hollering; but, you know, just goofy. He was always talking about breaking out of here and making his living as a hired gun. He liked to imagine himself roaming around Chicago or Los Angeles with a machine gun in a violin case. Cooling guys. Said he’d charge a thousand bucks per stiff.”

-Richard Hickock, from the Truman Capote book, “In Cold Blood.”

Andrews was already in a cell on Death Row at Lansing when he was joined by Richard Hickock and Perry Smith, the murderers of the Clutter family in the small western Kansas town of Holcomb, a case made infamous because of Capote’s book and a 1960s movie of the same name. 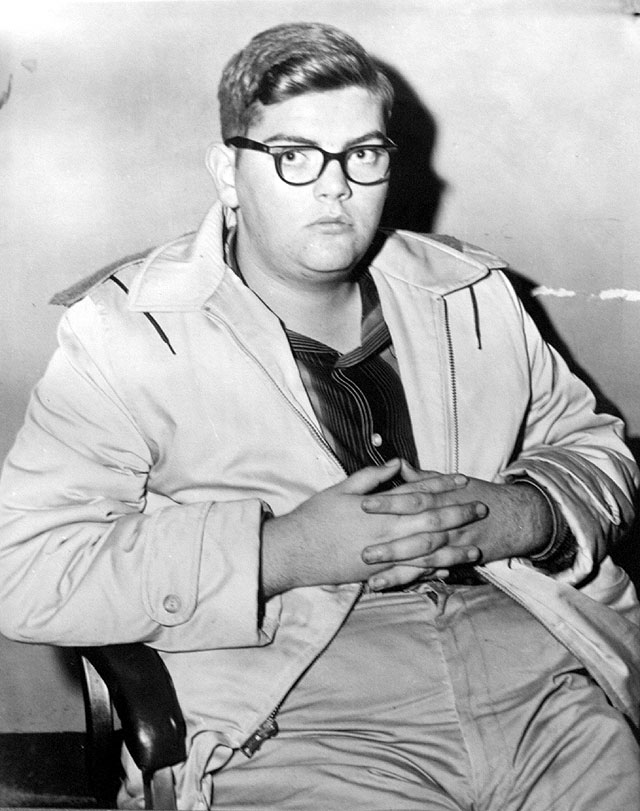 Andrews in 1958 after his arrest

Near the end of Capote’s 1965 book there are several pages quoting Hickock and Smith about their Death Row conversations with Andrews. In the movie there is a scene where the guards come to get Andrews and take him to the gallows to be hanged. Scott Wilson, the actor who played Hickock, calls Andrews “the nicest boy in Kansas.”

In the recently released movie, “Capote,” there also is a brief scene in which the guards take Andrews, played by C. Ernst Harth, to his execution.

Andrews, who stood more than 6 feet tall and weighed 260 pounds, confessed to the murders after he was arrested. Initially, he tried to make the crime scene look like a burglary turned into a multiple murder.

“I’m not sorry and I’m not glad I did it; I just don’t know why I did it,” Andrews was quoted as telling a reporter in a Journal-World story.

Andrews killed his parents and sister on Nov. 28, 1958, the Friday evening following Thanksgiving. He used a .22 caliber rifle and a German Luger to shoot his father, William L. Andrews, 50, 17 times; his mother Opal, 41, four times; and his sister, Jennie Marie, 20, three times.

Then he drove to Lawrence to his boarding house at 1305 Tennessee. He told a fellow roomer that he was picking up his typewriter so he could work on a theme for an English class.

Next he went to the Granada theater and watched a movie, “Mardi Gras.” After the movie he drove back to his home in Wolcott. On his way out of Lawrence he stopped to dismantle the guns and toss the parts off the Massachusetts bridge into the Kansas River.

Once he was home, Andrews called the Wyandotte County Sheriff’s Office to report the shootings. The first deputies to arrive said they found Andrews outside playing with his dog. He later told investigators he killed his family because he wanted to inherit the family farm and obtain $1,800 in his father’s savings account.

Gordon Chappell Jr. watched the search for the weapons at the river a few days later. Andrews also was there watching with the officers.

“I can remember they were dragging down there with big magnets and they had divers,” Chappell said.

Only some of the parts of the guns were found, according to news accounts.

Chappell Sr., who died in 1999, served as sheriff from 1957 until 1961. He then worked as a deputy U.S. marshal. There were times when he was assigned to escort Andrews, Smith and Hickock to federal court during their execution appeals, his son said. Andrews always remained quiet and polite. Smith and Hickock always were a little boisterous.

“He said those two (Hickock and Smith) would sit in the courtroom and joke and look out the window at the pretty girls and act like they didn’t have a care in the world,” Chappell Jr. said.

There have been rumors that when Andrews was hanged he broke the rope because of his large size. Chappell Jr. said he had heard the rumors. They could not be verified, however. In fact, one news story at the time of the hanging reported that Andrews had slimmed down to 180 pounds while he was in prison.

Chappell Sr. was invited by the state to watch Andrews hang.

“He didn’t go,” his son said. “He said he just didn’t want to witness any execution.”