GREENSBURG ? In an area of southwest Kansas long known for its meteorite finds, Steve Arnold came up with what may be the biggest of its kind ever found in the United States.

Arnold, a professional meteorite hunter from Kingston, Ark., found the 1,400-pound space rock two weeks ago in Kiowa County’s Brenham Township. Using a metal detector mounted on a three-wheel vehicle, he discovered it more than 7 feet underground and dug it up.

It was in the same area that in 1949 produced a 1,000-pound meteorite now on display at the Celestial Museum in Greensburg, part of the World’s Largest Hand Dug Well that is the community’s biggest claim to fame.

“It is aesthetically the type of meteorite that makes collectors drool,” Arnold, a former Wichita resident who has hunted for meteorites around the world, said of his find. “It’s what a meteorite ought to look like. It’s going to make first-graders go ‘Wow!”‘

Arnold estimates the value of the big rock “in the seven figures” and says he wants to sell it, preferably to a museum or someone who will keep it intact. 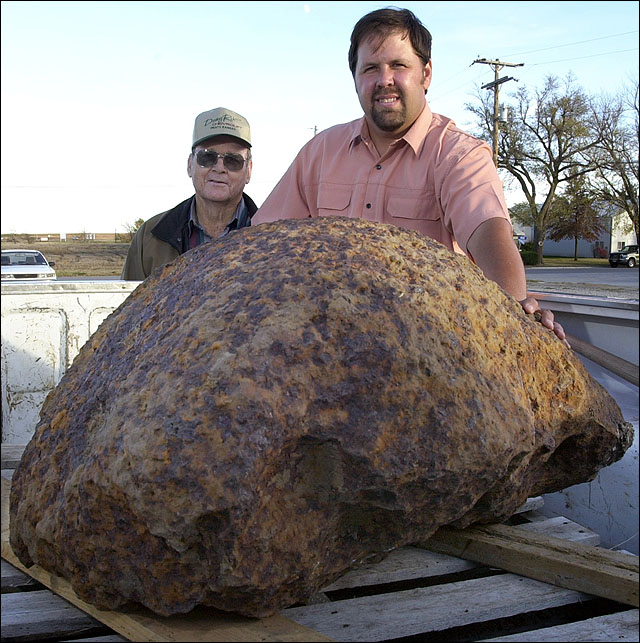 “It won’t be cut to reveal its inner beauty,” he said. “It’s awesome enough from the outside.”

Geoffrey Notkin, a science writer and meteorite collector who was with Arnold when the meteorite was found, said its size alone made it extraordinary.

“By sheer mass, it has to be one of the largest finds in decades,” he said.

According to the American Museum of Natural History in New York, the Brenham meteorite exploded centuries ago over what is now Kansas, scattering more than three tons of fragments.

“We get regular reports of meteorites,” said Rex Buchanan, associate director of the Kansas Geological Survey. “People see them and they bring them in. A normal size is anywhere from the size of your fist to a grapefruit.”

The meteorite Arnold discovered is classified as an oriented pallasite, so it has a conical shape and has olivine crystals embedded in iron-nickel alloy. Only two larger ones of that type are known to have been found: a 3,100-pounder in Australia and a 1,500-pounder in Argentina. 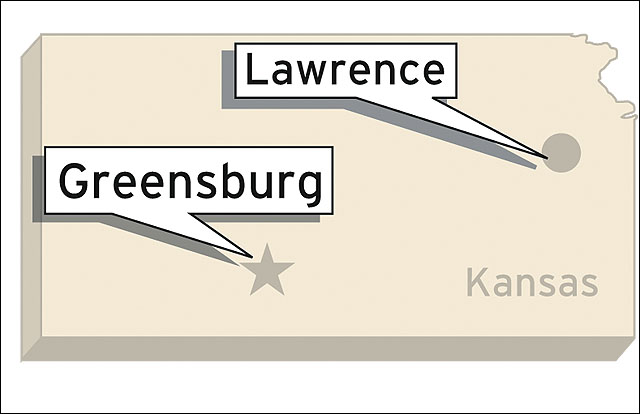 Meteorites change shape as they enter the Earth’s atmosphere. An oriented meteorite, which is rare, maintains a stable flight rather than tumbling.

Richard Stephenson, manager of the Big Well, said the majority of meteorites found in Kiowa County were from a two-square mile area in Brenham Township. The Kiowa County meteorites are known throughout the world for gemlike olivine crystals, and they look almost like stained glass when cut.