Kansan mostly alone in belief that he’s the true pope

Delia ? The weathered blue farmhouse stands just off a dirt road in the rolling hills northwest of Topeka.

There are children’s toys lined up in the yard and irises blooming in the garden around a statue of the Virgin Mary. Satellite dishes and solar panels point toward the southern sky.

“Good morning,” says the dark-haired man on the front porch. “How are you? I’m Pope Michael.”

This is David Bawden. He has never been ordained a priest and hasn’t been to Mass since 1989. But to his tiny flock, numbering about 100 and scattered as far away as India and Australia, he is the rightful leader of the Catholic Church.

Bawden, 45, has claimed the title of Michael I since 1990, when he was elected by six people – two of them his mother and late father – meeting in his father’s consignment store in nearby Belvue. He has maintained his “Vatican in Exile” near Delia for the past dozen years.

And yes, he has heard all the wisecracks.

If that bothers him – or his mother, Clara, with whom he shares the farmhouse – they don’t show it.

“They called Jesus a kook, too,” he says.

Even most other traditionalists – who reject the reforms of the Second Vatican Council in the 1960s and maintain that no legitimate pope has ruled from the Vatican since Pope Pius XII died in 1958 – dismiss his election, which they largely ignored despite what Bawden said were months of preparations and publicity.

“They had the right idea (i.e., that an election was necessary), but the wrong execution,” the Rev. Robert Lyons, a cardinal in the “true Catholic Church” led by the Rev. Lucian Pulvermacher, wrote in an e-mail to The Associated Press.

Pulvermacher, a former Capuchin priest who took the name “Pope Pius XIII” after his followers elected him in 1998, lives near Spokane, Wash. At least 10 other people around the world have claimed the papacy since 1958, some by election and some by what they claimed was divine revelation.

“Bawden was ‘elected’ pope by his parents and a lady friend,” Lyons wrote. “Anyone with an ounce of common sense would see such as a flawed election.”

But to the “lady friend,” author Teresa Benns, the fact that Bawden was the only eligible man present at the 1990 election was a sign from God. 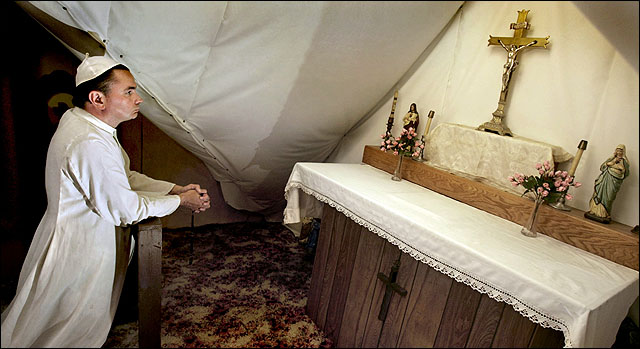 David Bawden, who has taken the name Pope Michael I, prays in a chapel in the attic of his home near Delia. Bawden has claimed to be the rightful leader of the Catholic Church since he was elected by a handful of traditionalist Catholics in 1990.

“I had never considered him a real candidate until the very day of the election,” said Benns, who lives in La Garita, Colo. “We had expected priests. We had expected more response. It was a disappointing thing, but it was like God saying, ‘This is the choice I give you.”‘

Not about the numbers

And to Bawden and his followers, low numbers mean nothing.

Bawden, who was born in Oklahoma City in 1959, said he had no plans to lead disaffected Catholics when he and Benns wrote “Will the Catholic Church Survive the 20th Century?” and published it in early 1990.

“That was never the intention,” he said. “I figured it was my duty to do all I could to bring about a papal election. God would provide someone. I’d leave that up to him.”

Raised by parents who rejected Vatican II’s changes, which included allowing Mass to be celebrated in local languages rather than only in Latin, he had attended two seminaries run by The Society of Saint Pius X. The priestly society professes loyalty to the pope but rejects the reforms of the 1960s and is considered schismatic by the Vatican.

Dismissed from a Michigan seminary in 1978, he moved to St. Marys, only a few miles from Delia, and took a job at a society-run college in an effort to prove himself worthy of being readmitted to the seminary.

But by 1984, disillusioned with the society after his seminary application was rejected, he had come to the position of sedevacantism – the belief that the throne of St. Peter was vacant, and that everyone who had held it since 1958 was a heretic who was unfit for the job.

He based that on statements made in the 1940s and 1950s by then-Cardinal Angelo Roncalli, who became Pope John XXIII in 1958.

Those statements appear to put Orthodox and Protestant Christianity on the same level as Catholicism. That, Bawden said, made Roncalli guilty of heresy and therefore ineligible to become pope – and made all his successors antipopes as well.

“I’ve also got specific heresies on my Web site for Paul VI, John Paul I and John Paul II,” he said. “I don’t have anything yet on Benedict (XVI), but I’m working on it – and it’s there.”

The Society of St. Pius X, which rarely issues public comment beyond the positions outlined on its Web site, dismisses the sedevacantist position – and, by extension, any elections to which it might lead, as “theory that has not been proven speculatively, and that it is imprudent to hold practically (an imprudence that can have very serious consequences).”

Bawden cannot celebrate Mass, because he has not been ordained. But because he believes all other Masses are illicit, he sees his situation as a sign.

“In prophecy – and all the fathers of the church agree – there will come a time in history when there is no Mass celebrated on Earth,” he said. “We’re in that time.

So he hopes for a bishop to declare his loyalty – perhaps, he says, one who was underground in a Communist country in the 1960s and did not sign off on Vatican II.

In the meantime, he checks his e-mail, writes and updates his Web site. Some donations come in from his followers, and his family’s savings help pay the bills.

He receives visitors in the living room, where a shrine with saints’ relics, holy water and statues of St. Michael the Archangel and the Virgin Mary stands between bookshelves holding cookbooks and the card games Bawden’s nieces and nephews like to play when they come to visit.

He studies in his upstairs library and prays in his tiny chapel with its pink, red and gray carpeting.

“My home is Rome,” he said – then added with a laugh, “but I don’t see getting there until Benedict XVI moves out of my apartment.”