The ghost that has haunted the Eldridge Hotel for years has been shoved out the door, along with the 80-year-old building’s discarded elevator.

Or at least that’s the theory.

“Some say it’s Shalor Eldridge himself, but others say there were more than one,” said Kendra Hatfield, assistant general manager of the hotel. “But, literally, the old elevator would go up to the fifth floor and open two or three times before it would take you anywhere. It was the ghosts getting on. They wanted to go down.”

Apparently, she said, the apparitions entered the hotel through the old cornerstone in Room 505.

But the latest renovation boxed the cornerstone in, leaving the ghost or ghosts with only one real option: to check out.

“With the new elevator in, you can’t see it,” said Hatfield, who has worked in the hotel for more than a decade and concedes that the ghost stores are far from an open-and-shut case. “They can’t get in, and the elevator doesn’t do that anymore.

“I think the ghosts left with the old elevator.”

The hotel’s new owners are hoping to restore the luster of the Eldridge Hotel’s guest list, which in years past has included a number of notables. Among guests who have stayed at the Eldridge or its predecessors at the corner of Seventh and Massachusetts streets: 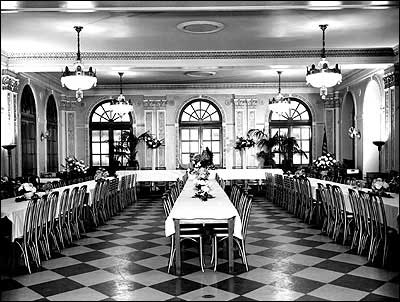 The Eldridge Hotel ballroom is shown from the 1940s. The downtown site has a former guest list with names like Martin Luther King Jr., John Wayne and Bobby McFerrin. It is believed to have a few otherworldly guests, too.

Back at Big Six

The Big Six Room lives on at the Eldridge, even if it’s empty — for now.

The room, in the hotel basement, features pennants embedded in the terrazzo floor of all six charter members of the Big Six Conference: Kansas University and the universities of Oklahoma, Missouri and Nebraska, and Iowa State and Kansas State universities.

The floor has played host to plenty of spirited events and evenings. The place started as a meeting room but by the 1970s morphed into a series of bars: the Big 8 Disco, Sheriff Sam Jones, G.P. Lloyd’s, Moody’s, Baron’s and the Kansas Sports Bar and Grill.

Susan Chaney, now an owner of the hotel, met her eventual husband, Mitchell, while working at the hotel as a waitress in the early 1970s. She’s counting on the room making a comeback on the social scene, starting as a meeting room or site for wedding receptions, birthday parties or anything else.

The place has room for seating 80 people for dinner, or accommodating up to 150 for a “standing” event, she said.

So, just who is Col. Shalor Eldridge, namesake for the landmark hotel downtown?

Eldridge was active in the efforts to make Kansas Territory a free state. Formerly a Democrat, Eldridge joined the Kansas delegation at the Republican National Convention in Philadelphia, and in 1856 he attended the National Convention of the Friends of Kansas in Buffalo, N.Y.

As a businessman, Eldridge bought the site of the Free State Hotel in Lawrence following its destruction by a pro-slavery mob and built the Eldridge House with his brothers.

After serving as a U.S. Army paymaster during the Civil War, Eldridge became a building contractor, building hotels in other cities, and Fraser Hall — the first one — at Kansas University.

The economic crisis of 1873 brought his construction work to a halt, but he engaged in mining in Colorado and Arkansas, from which he made and lost a fortune.