Amputee happy to be reunited with foot

Police had seized limb after complaints from neighbors about public spectacle

Fortunately for Ezekiel Rubottom, there’s no law against keeping your severed foot in a bucket on the front porch.

Rubottom, a 21-year-old Lawrence resident, ex-pressed relief Monday after police gave him back his left foot, which he began storing in a five-gallon bucket of formaldehyde on the porch at 627 Conn. after it was amputated three weeks ago. Police seized the foot Saturday, thinking it could have been evidence of a crime, but returned it after verifying Rubottom was the rightful owner.

Rubottom, an artist, occasional hip-hop emcee and recovering methamphetamine addict, is technically homeless right now but often stays with a friend at the home on Connecticut. He said he was born with a clubbed left foot and struggled throughout his life with pressure sores and infections.

Earlier this summer, a bone infection in the foot got so bad that he had to have it amputated at Lawrence Memorial Hospital. He decided to keep it. 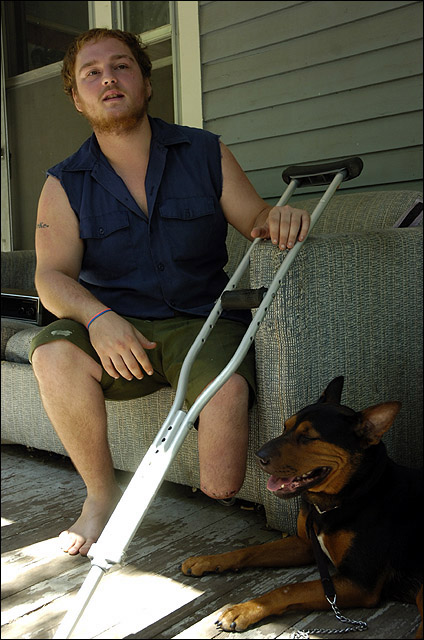 Ezekiel Rubottom, who had his left ankle and foot amputated three weeks ago, found himself the center of attention over the weekend. Lawrence Police came to the house where Rubottom was staying and took the amputated limb after complaints from neighbors about a number of people showing up to look at the foot. Police returned Rubottom's foot on Monday after establishing that it did indeed belong to him.

He said a pathologist at LMH checked the foot to make sure it wouldn’t be a hazard, and told him he could take it – as long as he had his own container that was labeled with handling instructions for the formaldehyde.

“My friend bought me a Westlake Hardware bucket, and that’s where I stuck it,” he said.

Karen Shumate, vice president of quality services for LMH, said people are allowed to keep body parts if they want them.

“They’ve had women that want their uterus. People take tonsils. They take appendixes,” she said. “I think it’s unusual that someone would want a foot, but it’s within their rights because it’s theirs.”

Rubottom admits it may sound unusual, but to him, that’s part of the appeal. Not everyone, he said, can say he keeps his own foot in a bucket.

Soon after the amputation, news spread. People started coming by asking to see it.

Rubottom said he cut off two toes, which he was considering giving to friends. He added trinkets to the bucket, including a porcelain horse and a can of Hamm’s beer, to make it what he called “a collage of myself.”

“I think I’m doing better with this than anybody will ever be that’s gotten something amputated,” he said.

On Saturday, the foot’s popularity went a little too far. Officers came to the home about 10:30 p.m. after getting a call from the parent of a child who lives nearby and had described seeing the foot, said Sgt. Dan Ward, a police spokesman.

When police arrived, some of Rubottom’s friends were there, but he wasn’t. To be careful, officers confiscated the bucket and put it into evidence storage.

“We had to make sure that no crime had been committed,” Ward said. 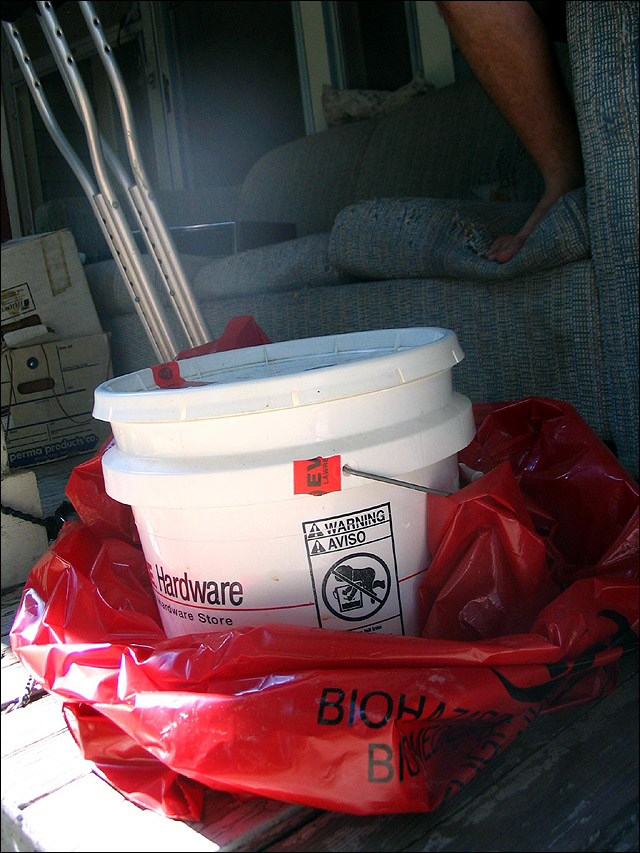 Lawrence Police on Monday returned a five-gallon bucket containing a severed foot in formaldehyde to its owner, Ezekiel Rubottom.

Karen Johnson, who lives at Seventh and Connecticut streets, isn’t amused. She said the home where Rubottom stays, which is divided into five apartments, has been a noisy nuisance lately.

“We’ve had a lot of vehicles coming down our alley,” she said. “We’ve had quite the flow of transients in the alleyway and around the house.”

Rubottom said an officer picked him up Monday and took him to LMH, where he signed a release form that allowed police to see medical records verifying that he’d had the amputation.

Sitting on the porch Monday afternoon, he put on a plastic glove, dipped a hand into the bucket and lifted out the foot for anyone to see. The next time, he joked, it would cost $2 to see it.