Edgar Allan Poe had more on his mind than ravens and creepy horror stories.

He spent a lot of time thinking about bigger issues — like how the universe formed, the relationship of stars and planets and why the night sky is dark.

Poe published his scientific theories in “Eureka,” a book he thought would revolutionize astronomy but now is little-known compared to his poems and magazine stories.

But the book has found new life, thanks to a Lawrence couple who has published an annotated edition through the University of Illinois Press.

“‘Eureka’ is quite complex,” Stuart Levine said. “It goes into detail. Poe has some solid training.”

Most 21st-century readers know Poe for his poems such as “The Raven” and “Annabelle Lee,” or detective stories such as “The Murders in the Rue Morgue.”

But Poe had some training in science, engineering and mathematics, primarily through attending lectures and reading popular science books of the time. “Eureka” was based on a lecture Poe delivered in New York.

The book, originally published in 1848, just a year before Poe’s death, offers a snapshot into both scientific thought and popular culture at the time, Levine said.

Levine, a retired Kansas University English professor, had written two previous books on Poe, and had collaborated with his wife, Susan, a retired administrator in the Graduate School office, on two others. 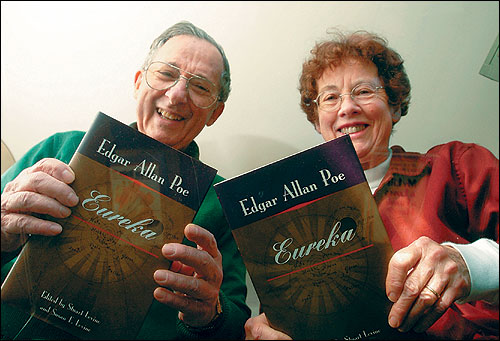 Stuart and Susan Levine show off copies of their new annotated version of Edgar Allan Poe's Eureka, which lays out Poe's thoughts on science and how the universe began.

One of Poe’s major scientific hypotheses was the rough equivalent of the “big bang” theory. He contended the universe filled with matter after a single, high-energy particle exploded. Current “big bang” theory says the entire universe formed during a similar process, not just the matter inside it.

Poe theorized the universe must be expanding, since the energy of the explosion is pushing matter outward. Scientists wouldn’t adopt this theory en masse until the early 20th century.

Poe also figured gravity eventually would pull all particles together, though, and the process would start over. Scientists believed that was true, too, until 1998, with the discovery of “dark energy” — energy that works against gravity to keep the universe accelerating.

“His astronomy is very good,” Stuart Levine said. “Poe really braced himself on the best, up-to-date information. He understands big bang, or figures that must have been what happened. He got it wrong, just based on what we’ve learned in the past few years.”

On another topic, Poe offers a correct explanation for “Olber’s paradox,” a problem that had troubled astronomers of the time. The paradox asks why, if the universe is of infinite size and stars populate the galaxies, the sky is able to be dark at night.

Poe theorized that the dark spots in the sky are from stars that are transmitting light that has yet to reach Earth. That basic principle holds true today.

Bruce Twarog, a KU professor of astronomy and physics, said he was impressed by many of Poe’s theories. The Levines asked Twarog to serve as a scientific consultant on the project.

“He was a rather educated guy for his time,” Twarog said. “He understands basic science. Unfortunately, he was an egotistical guy. He had an overextended view of his intelligence, and felt he could take what he knew and go one step further.”

For instance, Poe blasts traditional science for relying only on things that can be measured.

He also offers a theory of a greater intelligence guiding the formation of the universe through big bang, which angered both scientists and religious fundamentalists.

So while Poe got many theories correct, he didn’t have scientific basis for many of his thoughts.

“It’s like sitting around, drinking beers at midnight and talking about these things,” Twarog said. “When you’re Poe, you’re bright enough to do it and do it well enough to get people to listen to you.”