There were plenty of screams Friday afternoon at Liberty Hall, but none of them came from Howard Dean.

Instead, the new chairman of the Democratic National Committee was cheered enthusiastically by a sign-waving crowd gathered to hear Dean’s message that the party must build its strength in traditionally Republican states such as Kansas.

“We need to go everywhere,” he told the rally. “There is not one county in this state, I don’t care how far west you go, that doesn’t have Democrats. We have to be proud of who we are.”

It was a message gladly received among the Democratic faithful.

“It was wonderful, very energizing, a very positive, powerful message,” said Micheline Burger, who joined nearly 1,000 others in paying $5 to hear Dean, the former presidential candidate. “It gives me a hope there’s a good future ahead of us, as opposed to what we’ve been having the last four years.”

Mark Simpson, executive director of the Kansas Democratic Party, was unavailable to say how much the party raised Friday. But Dean’s rally, along with a $100-a-head fund-raiser at the home of Lawrence residents John and Nancy Hiebert, provided the state party with a fresh infusion of cash.

Just as important, other officials said, they got some inspiration. 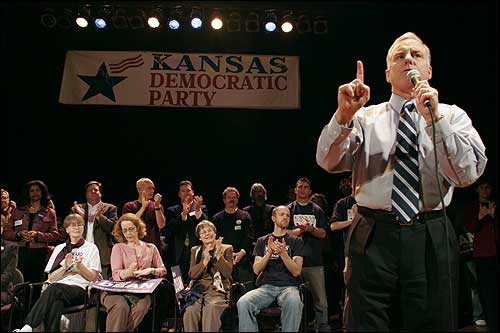 Howard Dean addresses a crowd of about 1,000 Democrats at Liberty Hall. Dean, a former U.S. presidential candidate and now chairman of the Democratic National Committee, also visited the home of a Lawrence couple Friday, where donors gave 00 a head to the DNC.

More than 100 people attended the Hiebert fund-raiser, where the house was festooned with a dozen “Dean for America” signs in the front yard.

Media weren’t allowed into the event. But Dean spoke in the Hieberts’ backyard, over a public address system, making it relatively easy to hear and see — there were wide slits in the fence — from a side street. At one point a group of four people quietly huddled at the fence to listen.

His speech was similar in both Liberty Hall and the Hiebert back yard. Democrats, he said, must reframe the values debate, claiming the high ground on Social Security, health care and protecting American security.

“Those are Kansas values,” he said.

But the Hiebert crowd got a little more red meat than the Liberty Hall attendees.

On abortion specifically, he said, the party must commit to making abortions “safe, legal and rare” while maintaining women’s rights to choose.

And Dean told the Hiebert fund-raiser that gay marriage was a Republican diversion from discussions of ballooning deficits and lost American jobs. That presents an opportunity to attract moderate Republicans, he said.

“Moderate Republicans can’t stand these people (conservatives), because they’re intolerant. They don’t think tolerance is a virtue,” Dean said, adding: “I’m not going to have these right-wingers throw away our right to be tolerant.”

And concluding his backyard speech with a litany of Democratic values, he added: “This is a struggle of good and evil. And we’re the good.”

When told of Dean’s remarks, Derrick Sontag — executive director of the Kansas Republican Party — said he was “shocked.” 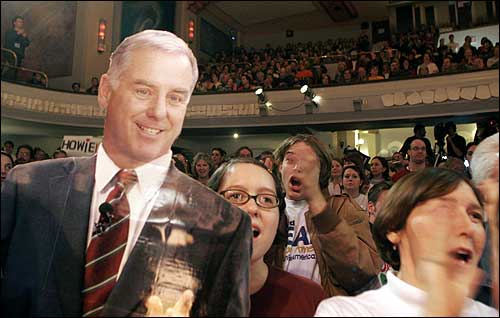 A life-size cardboard cutout of Howard Dean is hoisted into the air by cheering supporters while the real Dean takes to the stage at Liberty Hall. Dean, former presidential candidate and now chairman of the Democratic National Committee, spoke to a crowd of about 1,000 democrats at Friday's fund-raiser for the DNC.

Back at Liberty Hall, the ruling party’s supporters weren’t entirely absent from the area. Lawrence entrepreneur Eric Haar held a one-man demonstration in front of the Eldridge Hotel, 701 Mass. With a Bush-Cheney sign in his hand, he sat silently as the crowd of Lawrence liberals shuffled toward the event.

“I just want to show people driving by that not everybody is gung-ho and crazy about this Howard Dean thing,” Haar said. “I have been flipped off four times.”

Inside the hall, some people who saw Dean’s speech thought the former candidate for the presidency had watered down his rhetoric.

“I feel like he could have gone even stronger with his language,” said Katherine Dessert, a student and preschool teacher. “I feel like he was a little bit too conservative. It didn’t move me.”

Dean was joined on the Liberty Hall stage by a slew of state and local Democratic officials, but not two of the highest Democrats in the state: Rep. Dennis Moore and Gov. Kathleen Sebelius.

Sebelius said she had breakfast with Dean and was impressed with his enthusiasm.

” I think he will be a good chairman for the party. I think he has energy and focus,” she said.

“We have to compete at every level,” Gates said. “That’s what we’re doing tonight: showing up.”