The professor of a proposed class on intelligent design came under fire recently after his disparaging remarks about Catholics and religious fundamentalists were made public on an Internet discussion board. Mirecki on Dec. 5 reported being attacked on a roadside by two men who connected him to the controversy. The Douglas County Sheriff’s Office is investigating.

KU announced Wednesday that Mirecki had resigned from his department chairmanship, which he had held for more than three years.

“Professor Mirecki resigned as chair at the recommendation of his own peers – his departmental faculty,” KU officials said in a prepared statement. “Professor Mirecki’s course on intelligent design was canceled at his own request. While the university strongly supported both of these actions, the university continues to believe the course has merit and should be taught in the future.”

In a fiery statement to the Journal-World on Friday, Mirecki said he had “no choice about signing the resignation” and he pointed out the resignation letter was typed on stationery from the office of Barbara Romzek, interim dean of the College of Liberal Arts and Sciences. 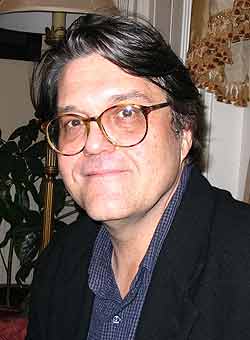 KU spokeswoman Lynn Bretz, in an e-mail to the Journal-World, said Mirecki met with Romzek on Dec. 6 to discuss the department’s recommendation that he resign from the chairman’s post. After the talk, Mirecki concluded he should submit a resignation, she said.

“At a computer in Strong Hall, away from his departmental office in Smith Hall, Professor Mirecki composed and typed the letter himself, with no one else in the room,” Bretz wrote. “He pushed the print command button, sending the letter to a printer in another room, next to a secretary’s desk. The letter was printed on the letterhead at hand. Professor Mirecki retrieved the printed letter from the secretary, signed it in front of the secretary and left it there. : In addition, Professor Mirecki had told at least one KU administrator on Dec. 5, following the departmental faculty meeting that day, that he felt the need to step down as chair.”

Brown said he wasn’t sure whether Bretz’s description was accurate.

“It’s not how he described things to me,” Brown said. “The point he made was very clear that the dean and another administrator made it clear to him that he had to resign.”

Brown said he had not done any work on the matter yet. He said he planned to meet with Mirecki again and discuss all of the details of recent events, do some research and determine whether there is basis for a lawsuit. Then, he said, he will talk with Mirecki to see whether Mirecki wants to go through with a lawsuit.

Lt. Kari Wempe of the Douglas County Sheriff’s Office said Monday that the investigation continues and the office welcomes any additional information from the public.