Mirecki says he may sue university

Kansas University professor Paul Mirecki said he’s hired an attorney and is ready to go to the mat with KU and the Douglas County Sheriff’s Office.

Mirecki said he’s angry because KU didn’t back him after religious conservatives attacked him for his plan to teach a course dealing with intelligent design.

Mirecki became a political lightning rod after his new course was announced and his derisive comments on an Internet message board about conservative Christians and Catholics were later widely distributed.

His planned spring course was canceled. Still, some legislators said they would call Mirecki and KU Chancellor Robert Hemenway on the carpet for a public hearing.

On Wednesday the university announced Mirecki had resigned as chairman of the religious studies department. But Friday, Mirecki told the Journal-World he was forced to step down. 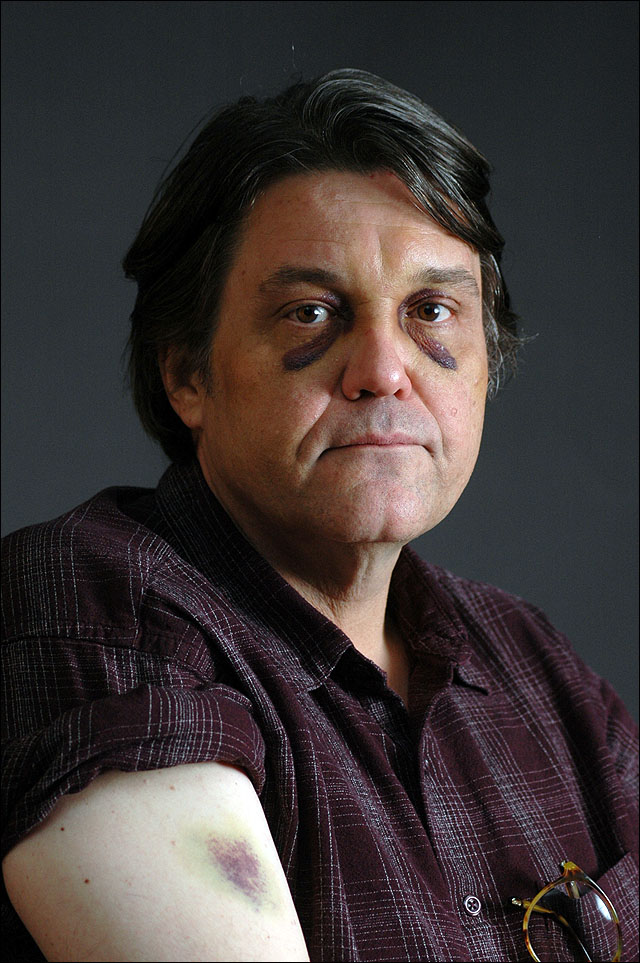 Kansas University religious studies professor Paul Mirecki displays on Friday the bruises that he says came from a beating two men gave him early Monday. He says the university has not been supportive of him through his ordeal.

“The University penalized me and denied me my Constitutionally protected right to speak and express my mind,” he wrote in a statement prepared for the newspaper. “I’ve become radioactive and the University’s administrators won’t support me.”

Mirecki said his career was ruined and that “speaking engagements that I had lined up now have been canceled.”

On Friday, he displayed two black eyes and a bruise on his arm that he said came from a beating administered early Monday by two unknown men who had followed him in a pickup truck as he drove to breakfast. He said his attackers mentioned the controversy.

He said he was not pleased with the sheriff’s investigation because he had been “treated more like a criminal than a victim.”

He said he was interviewed by officers several times, “once for five hours straight. They keep asking me the same things over and over. They seized my car; they entered my office and seized my computer. They said they need them for their investigation but it didn’t make any sense to me.”

Lt. Kari Wempe, a spokeswoman for the Douglas County Sheriff’s Office, released a statement Friday night that said the sheriff’s office had not seen a copy of Mirecki’s prepared statement to the media.

“Until we are provided with a document from Mr. Mirecki, we are not able to comment on it. Our agency continues to thoroughly investigate this crime against Mr. Mirecki,” Wempe said.

Mirecki said he has hired Lawrence attorney David Brown to represent him.

Hemenway said he had been told by other administrators that Mirecki stepped down from his chairman’s post. He said KU has supported Mirecki.

“Professor Mirecki still has a job at the University of Kansas,” Hemenway said. “That would appear to be support for his rights to his tenured position and his rights to free speech … The university deplores the fact that he was apparently attacked. We’ve said so.”

Hemenway also said he had been told that KU police called Mirecki to see how they might help him.

But Mirecki said the university had done little to back him and that he was fired as department chairman because he had the “temerity to challenge the power of the religious right in Kansas and the university capitulated to demands of the conservative minority.”

He said he felt let down by the administration and colleagues who sought his resignation Tuesday.

He said he had no choice but to sign the resignation letter, which was typed on stationery from the office of Barbara Romzek, interim dean of the College of Liberal Arts and Sciences.

Mirecki said he lived under threat of another attack.

“If the University doesn’t support me, I could be in more physical danger because the University is not standing up to the religious extremists,” he said.

He said the number of threatening letters and e-mails has increased since the chancellor called Mirecki’s online comments “repugnant and vile” in a public statement.

He said he also had received more than 2,500 e-mails and letters from academics around the world supporting him.

“The University has a duty, as a protector of intellectual honesty and debate, to support its teaching staff when controversial issues are raised,” Mirecki said. “Now those on the right are emboldened and feel they can take this a step higher.

“At this point, I just want this to be over.”