It stayed at the top of the charts for 10 weeks.

To this date, it has eclipsed sales of 17 million units.

It remains the best-selling live album ever.

“Frampton Comes Alive!” – a double-disc recording by English musician Peter Frampton – proved to be one of the most unexpected success stories in popular music history.

And few people had the inside track into “Framptonmania” as much as Stan Sheldon. The Ottawa native and longtime Lawrence resident played bass from 1975-’80 in Frampton’s quartet.

“None of us could see it coming, that skyrocket phenomenon,” Sheldon says. “We didn’t realize what was happening to us. It’s like, ‘Be careful what you ask for.’ Because we got it in spades.”

For Sheldon, the very album itself was a surprise.

“The night we recorded ‘Frampton Comes Alive!’ (at San Francisco’s Winterland Ballroom), I didn’t know we were making a record,” he says. “I stumbled off the stage, and Peter goes, ‘Hey, come here.’ He’d hired a remote unit to pull up back. When we heard the first eight bars of ‘Somethin’s Happening,’ we knew it was a magic night.” 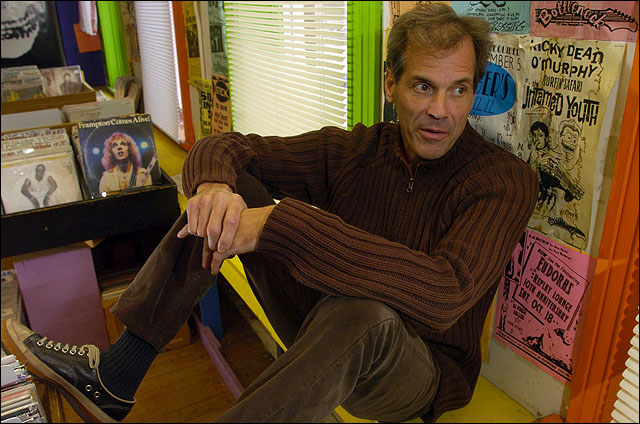 Stan Sheldon, a Lawrence resident, performed for years with Peter Frampton, most notably on the chart-topping album Frampton

Sadly, Sheldon and Frampton are the only living band members from the “Comes Alive!” recording. Drummer John Siomos died of undisclosed causes in January 2004, and keyboardist Bob Mayo died in February 2004 of a heart attack while on a European tour with Frampton.

The back-to-back passings provided an impetus for Sheldon to reconnect with his former bandmate.

“I called Peter and said, ‘What’s going on with this?’ It was the deaths that really brought us together,” he says.

Sheldon flew to Frampton’s home in Cincinnati (where the star recently relocated with his wife, a native of the area) to work on new material for an upcoming album for A&M Records. Frampton is releasing his first all-instrumental effort, and he cowrote a Latin-themed track with Sheldon called “Ida y Vuelta.”

The title translates – appropriately enough – to “round trip.”

“We were both very excited about the prospect of playing together again,” Frampton tells the Journal-World.

“I sent Stan an mp3 of an idea that I had that was sort of ‘Cuban-ish.’ I won’t say ‘salsa-ish,’ because I’ve been told it was nowhere near a salsa. But it had that South American feel to it. I knew he loved that sort of music – and I do, too – and I’d never done anything like that before. I’ve had it in mind for Stanley for quite some time.”

Show me the way

Sheldon first met Frampton in 1975. The Kansas native had moved to Los Angeles with best friend Tommy Bolin, a rising guitarist who died of a drug overdose early in his career. Kenny Passarelli (Elton John’s bass player) had recommended Sheldon to Frampton, and an audition was hastily arranged.

“I pushed my amp up the sidewalk of the Beverly Wilshire Hotel where he was staying,” Sheldon recalls.

“It’s one of those things where you feel it immediately when someone’s got it,” Frampton remembers. “We played for a very short period of time in a hotel room. I think we just played a couple of numbers, one of which was ‘Baby, I Love Your Way.’

“Stan was playing fretless, and I was pretty in awe of that – and it was in tune (laughs). Loved the sound, loved the feel. We seemed to hit it off. It was pretty quick and painless. He was in.”

The bassist then flew to New York to rehearse with the full quartet. No more than a month later, Sheldon found himself onstage recording the performance from which the majority of “Frampton Comes Alive!” was assembled.

“It was really one of the first times we ever headlined,” he says of the Winterland gig. “Ninety percent of it was culled from that one evening. That was rare, especially when you had Kiss putting out a ‘live’ album that was completely fixed. Ours was not touched except for my falsetto vocal part on (‘Show Me the Way’) – which was a little dodgy. … I was kind of high. Actually, I was very high.”

As Framptonmania began to escalate, so did Sheldon’s drug use.

“No one should have to go through that,” he says. “To come out of it alive was no easy feat.”

Meanwhile, the inevitable pressures to maintain a position at the top were starting to distract the talented Frampton from his fundamental role as a musician. He took a gamble on becoming a movie star.

Frampton was cast as the lead in “Sgt. Pepper’s Lonely Hearts Club Band” – an ill-fated Beatles musical that paired him with The Bee Gees.

Sheldon says, “We were telling Peter, ‘Don’t make this stupid movie. We need to be working on the next record. You’re not an actor.'”

Even so, the bassist found himself cast in the film.

There is some discrepancy about “Frampton Comes Alive!” being considered the biggest-selling live album of all time. This is because in the 1990s the Recording Industry Association of America (RIAA) decided to count future sales of double albums as two units, when it was previously considered one unit. Thus, Garth Brooks’ multiplatinum “Double Live” album recently overtook Frampton. “If that’s the case, then I’ve sold 34 million,” Frampton says of “Alive!”

“We didn’t get to play on the soundtrack, so Peter threw us a bone,” he says. “Me and Bobby (Mayo) are in it. In the very beginning there are these snippets of the original progenitor Sgt. Pepper’s band from the 20s and 30s – that’s us. They cut all our hair off. I’m actually playing sax in that Sgt. Pepper’s band.”

The movie was a financial and critical bomb – it was voted the worst rock movie in history in a recent CNN poll – and it signaled the beginning of the end of Frampton’s pop-culture dominance.

Lines on my face

Sheldon quit Frampton’s band, leading to a period of little-to-no contact between the two men.

The bassist went on to other tours with artists such as Warren Zevon and Foreigner’s Lou Gramm – as well as unsuccessful tryouts with Rick Springfield and Spyro Gyra. His ongoing drug use began to take its toll.

“That’s why I left the business,” he explains. “I had painted myself in a corner. I didn’t want to leave. But I had to or I was gonna die.”

Sheldon returned to Ottawa in 1987 to clean up.

“I was getting healthy – and that took a lot of convalescing, because I was in pretty bad shape when I first arrived here,” he says. “So I got straight. Got feeling good. Then I came to Lawrence.”

He spent four years at Kansas University earning his undergraduate degree in environmental studies, then he entered the master’s program in Latin American studies.

“I started studying music in another way,” he says.

He indulged his love of South American songs by performing frequent gigs with Lawrence band Son Venezuela and other local artists. (“I’m a perfectionist,” he says. “I’m kind of a taskmaster, especially with drummers. A lot of drummers in this town don’t like me. I’ve played with some of the greatest drummers in the world, so I know what that’s like.”)

These days the former rock star flies all over the country working for Lawrence-based company META.

“I do environmental training, but I teach it in Spanish to the workers coming up here from Mexico who have to be EPA-approved,” he says.

Now 55 years old (the same age as Frampton) and free from drugs for nearly two decades, Sheldon is debating returning to the professional world of music.

“I’m thinking about moving back to Nashville,” he says. “Whether I play with Peter or not, this little reunion has given me a springboard back in if I choose.

“There may come a day when I would go on the road. I think I’d enjoy it more. I enjoyed it then. But I’d really savor it now.”