The war along the Wakarusa, 150 years later

Prelude to Civil War seen during feuding in Lawrence area

An argument can be made that the Civil War began in Lawrence 150 years ago this week – even though the war’s first shots weren’t officially fired for another six years.

Feuding between the region’s free-state and pro-slavery forces had resulted in a murder, an arrest and a call to arms. Heeding the call, abolitionist John Brown and sons paid their first visit to Lawrence, bringing a wagonload of weapons.

Days later, Brown wrote in a letter to his wife that the free-staters’ fury was “one of the sure results of CIVIL WAR.”

“He put it in capital letters,” said Karl Gridley, an authority on Brown. “As far as we know, it was the first time he used the term ‘Civil War.’ It was very symbolic of what he was thinking at that point in time – and this is four years before the siege at Harper’s Ferry.”

The weeks’ events became known as the Wakarusa War, though only a handful of shots were fired. 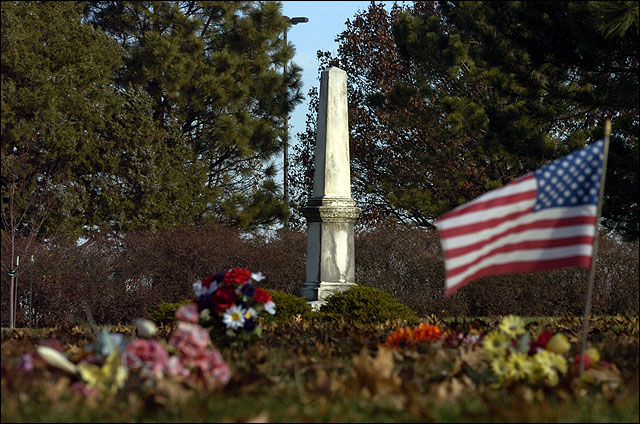 The gravestone of Thomas Barber rises in Pioneer Cemetery on Kansas University's west campus. Barber was killed 150 years ago during the Wakarusa War.

The area’s abolitionists responded by setting fire to some pro-slavery cabins, which prompted the arrival of pro-slavery Douglas County Sheriff Samuel Jones, who at the time was based in Westport, Kan.

While taking Branson to Westport, an abolitionist posse overtook Jones and freed Branson. Jones, in turn, returned to Westport, where he rallied between 1,500 and 2,000 Missouri ruffians to quell what he considered an insurrection.

“This is the first time Missourians camped along the Wakarusa River, intent on invading Lawrence,” Gridley said.

At the same time, armed abolitionists were pouring into Lawrence.

Brown and his sons arrived at Blanton’s Bridge – near where Douglas County Road 1400 now crosses the Wakarusa River – to find a well-armed band of Missourians.

According to Brown, he and his men “opened their coats” to show they, too, were armed and ready for battle. The pro-slavery men, he wrote, let them pass.

The day before, a pro-slavery posse had shot and killed abolitionist Thomas Barber as he rode to his farm near Clinton. He was quickly portrayed as a martyr by fellow abolitionists.

“It’s said that his funeral cortege reached all the way from downtown to Mount Oread,” Gridley said. “It made the news back East.”

It also inspired the poet John Greenleaf Whittier to write “Burial of Barber,” a lengthy poem commemorating the event. Barber was buried in Pioneer Cemetery, which is now part of Kansas University’s west campus.

Fear of Lawrence being attacked prompted construction of five mud forts, the largest being near the intersection of Massachusetts and Sixth streets.

“It’s kind of a convoluted story,” said Lawrence historian Katie Armitage. “The two killings – Barber’s and Dow’s – weren’t really linked, but with everything else that was going on they sort of got melded together.”

Eventually, the ruffians dispersed after the two sides, aided by then-Territorial Gov. Wilson Shannon, brokered a truce. The weather, too, was a factor.

“As soon as the weather got nice, that’s when the violence really escalated,” Rues said. “Look at what happens in the spring and summer of 1856 – Lawrence is sacked, there’s the Battle of Black Jack, the Pottawatomie Creek Massacre, the Battle of Osawatomie, and the attacks on Fort Franklin, Fort Saunders and Fort Titus.”

Rues, too, said the Wakarusa War marked the unofficial start of the Civil War.

“I tell people the rescue of Branson was the trip-wire for what became known as Bleeding Kansas,” he said. “After that, the dominos started to fall.”

The Wakarusa War is not to be confused with William Quantrill’s raid in 1863, during which most of Lawrence’s buildings were burned and more than 150 men and boys were killed.

Despite its significance, local historians have few plans to commemorate the Wakarusa War’s 150th anniversary.

“I think we’re going to put a wreath on the Barber Memorial (in Pioneer Cemetery),” Armitage said. “That’s about it. We kind of included it in last year’s Sesquicentennial Celebration, but it’s December and you never know what the weather’s going to be like.”