Talk about your expensive art.

City commissioners may soon be asked to spend upward of $185,000 to ensure a downtown mural painted by area youths doesn’t become lost to new development.

Tim Holtzclaw, a teacher at Century School, said he was concerned a mural that approximately 70 students from the private school is painting on a building at 825 Vt. will be lost because a vacant lot next to the project may be developed with a building that will cover the painting.

“We have been working for months on this, and it would just be a shame if all their work ended up being covered up,” Holtzclaw said.

But Holtzclaw said city commissioners may be able to help. The teacher said he has plans to propose to city officials that the vacant property be bought and turned into a city pocket park. That would allow the mural to remain in plain view and also give downtown visitors a new place to relax, similar to the pocket park next to Watkins Community History Museum. Holtzclaw said the site could be used for a nice fountain, plaza or even as a new home for the Lawrence Farmers Market.

The commercially-zoned lot is up for sale but carries an asking price of $185,000. 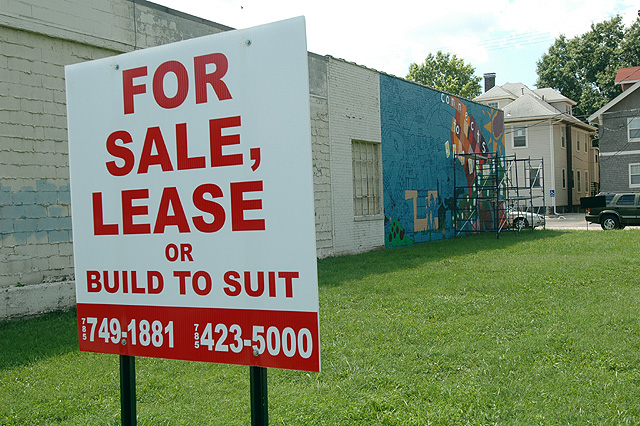 City commissioners may soon be asked to spend upward of 85,000 to buy a lot to ensure that a downtown mural painted by Century School students doesn't become lost to new development. The mural is located in the 800 block of Vermont Street.

“It would be expensive,” Holtzclaw said. “It is more than our parents (school patrons) could raise.”

Garth Terlizzi, who controls the limited liability company that owns the property, said he’s not too interested in the property becoming a park. He thinks it has a much brighter future as a condominium or office project.

“I think the city probably has better uses for its money than to build a pocket park there,” said Terlizzi, who said he wouldn’t offer any discount on the sale price to accommodate a park project. “Parks are nice, but we have a huge park (Watson Park) a block west of there.”

City officials also said the park idea wasn’t on their radar screen. City Manager Mike Wildgen said he hadn’t been approached about the idea. He said staff members weren’t in a position to endorse the idea.

“In all the plans we have, it certainly is not a place that we have ever contemplated putting a park,” Wildgen said.

Leaders with Century School – which serves about 75 students between 3 and 12 years old – said they also weren’t formally endorsing the idea.

“Obviously, we would love it if that were park or greenspace because it would serve us well,” Jon Stutler, Century’s principal said of the lot, which is across the alley from the school at 816 Ky. “But at the same time, when we decided to have Tim work on this mural, we understood that a building could be built there at any point.”

The mural, which was designed by the students, is not yet complete. Students stopped working on the project earlier this month after it was determined they did not have the permission of Terlizzi to set up scaffolding on his property.

Terlizzi said he asked the group to stop work on the project because he feared he would be liable if any students were injured while on his property. He said he has sent a letter to the school saying that the project could resume if they would produce documents releasing him from all liability.

Holtzclaw said he hoped to reach an agreement with Terlizzi but said work on the project remained halted. He said he also still must receive a permit from city code officials, which he believes is forthcoming.