Before he began using a wheelchair, Brad Linnenkamp loved to ride the rides at Worlds of Fun.

“I went to Disneyland and to Disney World, too,” he said. “I rode quite a few of them, but that was back when I was young.”

But as his cerebral palsy worsened and his wheelchair use increased, he found that most amusement park rides proved inaccessible for the disabled.

“I started using a wheelchair pretty much full time by the time I was in fifth grade,” Linnenkamp said.

“It’s just too hard to get in and out or it takes too long,” he said. “You don’t want to have everybody waiting on you.”

“That would be nice,” Linnenkamp said.

Three four-student teams of KU students recently won first, second and third places in a national “Access to Fun” engineering contest co-sponsored by the International Association of Amusement Parks and Attractions and the U.S. Access Board, a federal agency that oversees regulations affecting accessibility. 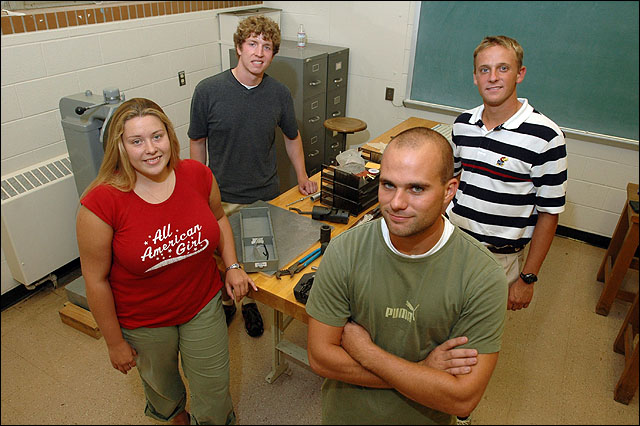 KU engineering students from left, Carla Hines, a Shawnee junior, Matthew Hess, a McPherson senior, Francis Hitsch-mann, a Great Bend senior, and Tyler Docking, an Overland Park senior, won first place in a contest to design a device to help people with disabilities use amusement park rides. The contest was sponsored by the International Association of Amusement Parks and Attractions and the U.S. Access Board.

Thirteen universities and engineering firms entered the contest, which challenged participants to design a device to help people with disabilities get on and off rides that require stepping down to board.

Most water rides, for example, require riders to step down from a staging area.

“What we’ve designed is a transfer device that uses a beam with a seat on it to position the person over the ride, and then there’s a hydraulic cylinder that lowers the person to the level of the ride,” said senior Matt Hess, leader of the first-place team.

“We worked on it most of the (spring) semester,” said team member Francis Hitschmann. “We didn’t keep track of the hours, but it was a lot.”

In the coming weeks, the first place team – Hess, Hitschmann, Tyler Docking and Carla Hines – will build a prototype for exhibition at the annual IAAPA trade show Nov. 14-19 in Atlanta.

“They did well, very well,” said Lorin Maletsky, a KU assistant professor in mechanical engineer. “I have to say all three teams’ designs are impressive. They did everything from putting a budget together to consulting with amusement park managers to talking to potential users to computer graphics.”

The KU teams were made up of students in Maletsky’s junior-level mechanical engineering class.

The state’s advocates for people with disabilities welcomed news of the project.

“Most of us, when we think about accessibility issues, it’s within the context of the steps in front of the courthouse,” said Rocky Nichols, executive director at the Topeka-based Disability Rights Center of Kansas. “But, really, accessibility is about everyday life, which includes recreation, and recreation includes amusement parks.”

He added, “The KU students who are focused on this issue are to be commended.”

The national “Access to Fun” design project challenged participants to create ways for people with disabilities to get on and off amusement park rides. The top winners were all from the KU School of Engineering: