Like many a budding artist, Sadie McEniry is a hands-on worker – not content to leave the creative process to others.

“I just want to be part of every stage of doing this,” Sadie said last week, looking over the mural she’s helping create in the 800 block of Vermont Street. “I painted the background blue, and I did the outlines.”

Sadie, 9, is one of 70 Century School students between the ages of 3 and 12 helping create the mural. Tim Holtzclaw, a teacher leading the effort, said the mural is a perfect summer project for students of the small private school for kindergarten through sixth-grade students, which operates year-round at 816 Ky. 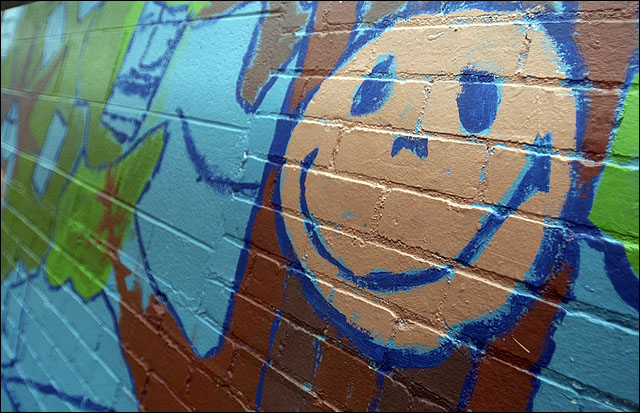 Seventy Century School students are working on a building mural this summer in the 800 block of Vermont. Sprawling trees and a sun made out of a brain are among the designs that have been created.

“We have kids of all ages and social backgrounds coming together, so it’s perfect to do art that is displayed in the community,” Holtzclaw said.

It’s certainly a way to get children to focus during the dog days of summer.

“I enjoy getting out of the building because I’m like an animal in a zoo that can’t be caged up,” Sadie said.

After getting permission from the building’s owners, Holtzclaw worked with the students to create the design of the mural, which should be completed by September.

Sprawling trees and a sun made out of a brain now decorate the building. The students are currently coloring in the design, which was previously sketched out.

“It was kind of hard to decide our ideas.” said Eli Jost, 7. “We decided to draw trees and make pencils and sticks.”

There’s paper coming out of the tress and going into the school for the children to work on.

While the kids came up with lots of ideas, some were nervous about the technical aspects of painting on a permanent structure for everyone to see.

“The fact that it’s out in public, it gives them something to be proud (of),” Holtzclaw said. “It forces them to expose their talents. They’re proud of it.”

The city requires a permitting process – one that might include an appearance before the arts commission – before major artworks such as the mural in the 800 block of Vermont can be created downtown. Century School officials got permission from the building owners to do the mural but failed to seek the city permit.

But City Hall won’t bust the students. City Manager Mike Wildgen said he had no plans to issue a citation, instead urging the muralists to seek a permit first thing this week. Tim Holtzclaw, lead teacher on the project, said he would do so.