Some cannot accept that Elvis died.

David Kennedy, of Beebe, Ark., says after 15 years of research he can prove Quantrill staged his own death, went on to raise Cain with the notorious bank robbers Frank and Jesse James, and later married and settled down in Arkansas.

In a telephone interview Monday, Kennedy said he started coming across information that Quantrill had lived a long life under a different name after the Civil War.

“When I originally picked it up and started looking, I thought it would be real easy to bust the myth,” Kennedy said. “After four or five years I realized I failed. I kept generating information from every source that it was him.”

Kennedy, an amateur historian and retired police investigator, has little credence among Lawrence’s Civil War historians. They say Kennedy is just the latest in a long string of people who refused to accept that Quantrill died after being shot in the back in Louisville, Ky., in the waning days of the Civil War.

Quantrill gained infamy for leading 440 pro-slavery ruffians in a bloody attack on abolitionist Lawrence on Aug. 21, 1863, killing more than 150 people and torching more than 175 homes and businesses.

Almost two years later, according to the generally accepted version of the border ruffian’s fate, Quantrill and a handful of raiders were captured on a farm in Kentucky. Quantrill, then 27, was shot in the back while trying to escape. He later died in a military prison hospital in Louisville. 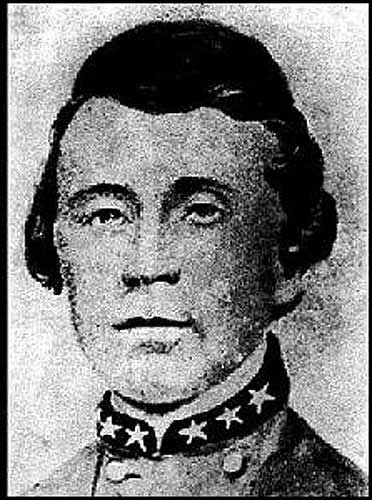 William Quantrill, who led a deadly 1863 raid on Lawrence, may have staged his death.

However, there is a bit of wiggle room left in the historical record for disputing that version of events.

“There is no incontrovertible, scientific proof that Quantrill died in Louisville, Kentucky, in 1865,” said Quantrill biographer Ed Leslie, an Ohio resident whose 534-page book “The Devil Knows How to Ride,” is considered the best yet by Lawrence experts. “But the evidence is quite strong that he did. I’ve researched the question of his death as thoroughly as anyone, and I am 99 percent convinced he died in the prison infirmary.”

Kennedy said his research had turned up a “handwriting sample, photos, Masonic records, and related evidence,” proving that Quantrill lived until 1917.

In defending his research, he said he thought other historians just found the story “too far-fetched” and didn’t pursue it far enough.

But it is clear that in some ways the Civil War continues.

“(Quantrill) lingered in a hospital bed for 30 days before he died. I assume that was plenty of time to confirm who he was,” said Lawrence-area historian Karl Gridley.

Lawrence High School history teacher Paul Stuewe, an expert on Quantrill, said most historians note that after Quantrill’s death, a childhood friend, W.W. Scott, convinced Quantrill’s mother to have her son’s remains exhumed in 1887 from an unmarked grave in Louisville.

Fifty years after William Quantrill's raid on Lawrence, many of the survivors gathered to recall the devastating day in 1863. The group gathered on Aug. 21, 1913, in front of the Eldridge House at Seventh and Massachusetts streets. The location was the home of the Free State Hotel when Quantrill's Raiders sacked and destroyed the city.

Quantrill’s mother identified her son’s skull because it had a chipped molar that matched his.

“That’s the story that most historians accept,” Stuewe said.

Also true, according to Leslie: 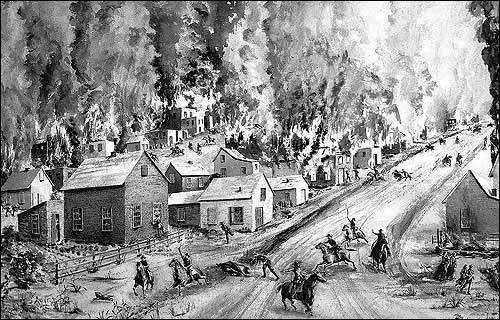 This image depicts the scene of William Quantrill's raid in 1863. Historian David Kennedy, of Beebe, Ark., says after 15 years of research he can prove Quantrill staged his own death, went on to raise Cain with the notorious bank robbers Frank and Jesse James, and later married and settled down in Arkansas.

In his book, Leslie devotes a chapter to the rumors surrounding Quantrill’s survival.

“This is not a new phenomena — it’s actually quite American,” he said, noting that rumors also have long had American icons Kennedy, Monroe and Elvis Presley being quite alive.

“In the half-century that followed Quantrill’s death there were all kinds of rumors published in newspapers all over the country, often under the headline, ‘Quantrill lives!'” Leslie said.

One of the rumors, he said, proved fatal.

“There was a man, sort of a beachcomber, in British Columbia, who claimed to be William Quantrill. He had scars that matched Quantrill’s known wounds, and he carried a pistol with the initials W.C.Q. carved in the handle,” Leslie said.

“Apparently, a couple men from Lawrence believed the man, tracked him down and beat him to death.”