One of the nation’s most renowned journalists on Friday accused his profession of squandering the public trust.

“You can’t serve the public good without the truth as a bottom line,” said Carl Bernstein, the former Washington Post reporter who, along with Bob Woodward, broke and covered the Watergate scandal, which resulted in the resignation of President Richard Nixon.

Too often, Bernstein said, the ever-escalating quest for profits has replaced the profession’s obligation to seek “the best obtainable version of the truth.”

Bernstein, 61, addressed an afternoon gathering of about 150 journalists — newspaper editors and publishers, mostly — at the Kansas Press Assn.’s 113th Annual Convention, at the Lawrence Holidome.

Though the nation’s newspapers are hardly faultless, Bernstein said television news had been taken over by an “idiot culture” that spends more time chasing celebrities than explaining life-changing events.

To underscore his point, Bernstein recalled how Diane Sawyer in her first story for the first installment of ABC’s “Prime Time Live” asked Donald Trump’s then-girlfriend Marla Maples if her relationship with the recently divorced real estate mogul had resulted in the “best sex you’ve ever had.”

That same week, he noted, Nelson Mandela had triumphantly returned to Soweto after years in a South African gulag and agreement had been reached on unifying East and West Germany.

“That was a triumph of the idiot culture,” Bernstein said, adding that several newspapers, too, had played up Trump’s divorce more than Mandela’s return.

Bernstein said the media’s race to embrace this “idiot culture” has weakened its resolve to pursue truth and relevance. It’s a weakness, he said, that’s come to threaten the public good more than secrecy. 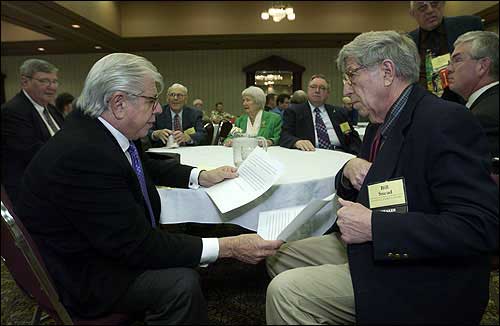 Carl Bernstein, left, a reporter who helped break the Watergate story, talks with Bill Snead, Journal-World senior editor, before Bernstein's speech Friday to the Kansas Press Assn. at the Lawrence Holidome. Snead, a longtime colleague of Bernstein's at The Washington Post, introduced Bernstein to a crowd of Kansas publishers, editors and reporters.

“The gravest threat today to the best obtainable version of the truth comes from these lowered standards,” he said. “And the consequences to a society that is misinformed and disinformed by the grotesque values of this idiot culture are truly perilous.”

Noting that he and Woodward recently sold their Watergate papers to the University of Texas, Bernstein wondered aloud if in today’s newsroom a pair of 28-year-old reporters would have the backing to break a similar story.

“For the first time in our history,” he said, “the weird, the stupid, the coarse, the sensational and the untrue are becoming our cultural norm — even our cultural ideal.”

Woodward and Bernstein’s papers fetched a hefty $5 million. Bernstein said the papers do not identify their anonymous source, Deep Throat.

Bernstein challenged the nation’s media to rediscover its obligations to inform the public and to promote the “public good” rather than agendas driven by political spite. He assured the audience that in Washington, D.C., factions within the Republican and Democratic parties spent considerably more time and energy hating each other than fighting terrorism.

Ned Valentine, publisher the weekly Clay Center Dispatch, said that while he agreed with most of Bernstein’s assessment, he disputed the notion that conservative commentators such as Bill O’Reilly and Rush Limbaugh are behind the often-heard claim that the mainstream media have a liberal bias.

“The sense that I get is that readers have come to believe their questions are not being answered and that they’re only getting one side of the story,” he said. “But it didn’t start with Limbaugh or O’Reilly, they simply tapped into it.”