Lawrence newspapers existed before there was news

Early press was partisan over issue of slavery

When pro-slavery forces sacked Lawrence in 1856, they destroyed the printing presses of the anti-slavery newspapers, called the Kansas Free State and the Herald of Freedom.

Later, anti-slavery forces collected some of the remaining lead type from one of the papers, melted it down to make cannonballs and fired them at their pro-slavery enemies, yelling, “Another issue of the Herald of Freedom!”

Today, Lawrence residents don’t have to endure cannon fire to get the news. They can access news and information with ease through numerous sources — the Internet, television, radio and newspapers.

But when Kansas became a territory in 1854, getting the news was a serious business.

Probably no other region’s history is so linked with newspapers, specifically those papers produced weekly with hand-operated presses and a few sticks of lead type. Many observers at the birth of the Kansas territory said newspapers existed even before there was news to put in them.

But that quickly changed. Newspapers often found themselves in the middle of the violence of “Bleeding Kansas” and the major issue of that time — slavery.

“It was a busy time for newspapers,” Capt. Henry King, an editor of the St. Louis Globe Democrat, remembered in a 1906 commencement address at Kansas State University. “Their post of duty was on the firing line, and they helped to bring about the news they published.”

Newspapers helped shape Kansas and were important to the growing population; those East Coast abolitionists moving to Kansas couldn’t do a Web search on Lawrence to find out about what they were getting into. They relied on newspapers to bring them information.

“The people from the North and East settling in eastern Kansas at that period were for the most part fairly good readers,” said Virgil Dean, Kansas State Historical Society historian.

It was an era when papers sprang up like wildflowers after a spring rain, and many early settlers were journalists. At least one member of the first New England Emigrant Aid Company party to arrive in Lawrence was a reporter; there were more in the second and later groups. More than 100 newspapers were published in Kansas during the territorial years.

Just months after the Kansas territory was established, type was being set under an elm tree in Leavenworth for the first newspaper in Kansas — a pro-slavery paper called the Kansas Weekly Herald.

In January 1855, publication started in Lawrence of the Herald of Freedom, Kansas Free State and Kansas Tribune, the first anti-slavery newspapers in Kansas.

The Tribune was the continuation of John Speer’s Kansas Pioneer, whose first issue was dated Oct. 18, 1854, and listed the site of publication as “Lawrence, Kansas Territory.” That first issue, however, had been printed in Medina, Ohio. The name was changed for the second issue after Speer arrived in Lawrence and learned a nearby paper — which was pro-slavery — was called the Pioneer. 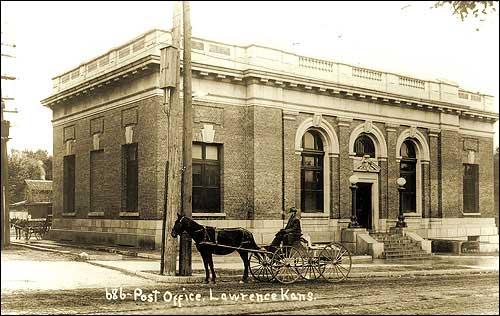 In 1911, this building at the corner of Seventh and New Hampshire streets housed Lawrence's first permanant postal service structure. It was built for 0,000 with money secured for the city by U.S. Congressman J.D. Bowersock, and opened April 1, 1906. Since September 2001, it has housed the converged newsrooms of the Journal-World, 6News and World Online.

The Herald of Freedom also distributed an October 1954 edition. It listed the site of publication as “Wakarusa, Kansas Territory,” but it also had been printed elsewhere, in Conneautville, Pa.

Some papers quickly went out of business or merged and changed overnight their allegiance from pro-slavery to anti-slavery. According to research by David Dary, a former Kansas University journalism professor, about 70 newspapers had appeared at one time or another from 1854 through about 1980 in Lawrence or Douglas County.

The papers of those early days were partisan organs and made no pretense about objectivity. They also were boosters for their towns, a task they took more seriously after the Civil War.

As Lawrence progressed, the history of the town’s media became intertwined with the Simons family.

In 1891, W.C. Simons, 20, who grew up in a soddy, had little formal training and worked as a typesetter, came to Lawrence to lease and operate the Lawrence Record, a daily and weekly paper owned by J.B. Watkins.

By 1892, Simons had started a new paper, the Lawrence World, and started acquiring other local papers until he purchased the most prestigious paper in town, The Journal.

In 1911, fire destroyed The Journal’s building, and the decision was made to merge the two papers, producing the first edition of the Journal-World on Feb. 19, 1911. By this time, W.C. Simons’ 7-year-old son, Dolph Simons, was delivering the paper.

Dolph Simons became publisher in 1944, and his son, Dolph Jr., followed as publisher in 1962. Now, a fourth generation of the family is taking the reins.

In 1968, the company applied for the cable television franchise for Lawrence and got it. It activated its first customers in 1971. The World Company is now one of the nation’s leaders in providing news services through television, the Internet and newspapers.

At KU, student papers came and went over the years. In 1874, the Observer of Nature, described at KU’s “first serious student publication,” issued its premiere edition. In 1895, after nearly 20 years of short-lived niche publications of uneven quality, a student-run newspaper, the Kansas University Weekly, emerged with the “official approval and support of the University.”

On Sept. 17, 1904, the Semi-Weekly Kansan first appeared. By 1908 it was being published three times a week, and in 1912 it began daily publication. At the time it was the first college daily newspaper in the state. The University Daily Kansan continues today.

Starting as early as 1916, the wonders of radio began sweeping across Kansas, first through homemade broadcasting and receiving sets often made by enterprising farm boys who communicated with other amateur operators around the world.

On April 18, 1916, the Kansas Alumni Association leased a 3,800-mile network of telephone wires for an alumni reunion, considered to be the first of its kind in the nation, according to a historical account kept by the university.

In 1924, KFKU, the university’s first radio station, made its debut.

In 1926, Lawrence businessman R.C. Jackman founded WREN as a way to promote his Jenny Wren Ready-Mixed Flour. The name of the station was taken from the flour and the “wren” in Lawrence. The transmitter was in the storage room of the Bowersock Mills and Power Co., the microphone stood on a stack of empty flour sacks.

WREN later moved to Topeka and went through several owners, including a former governor, Alf Landon. The station went out of business in 1987.

Throughout the massive flooding, Booth broadcast information and brought news to anxious listeners by announcing the names of people who had been safely evacuated. He allowed WREN in Topeka and KOFO in Ottawa, whose transmitters had been submerged, to use KLWN’s tower for broadcasting.

“We were on the air for 24 hours a day for days and days,” said Arden’s son Hank Booth, a longtime radio personality who eventually sold KLWN. “We were the go-to source for immediate information.”

The miracle of TV

Prior to cable television, Lawrence residents received their TV programming over the air from stations in Topeka or Kansas City, Mo.

“Topeka and Kansas City stations came in pretty well usually with an outdoor antenna on your house,” said Bruce Linton, a former professor of radio, television and Â, at Kansas University. “Commercial television was in full bloom.”

In the late 1940s and early 1950s, appliance stores couldn’t keep supplies of television sets from a public hungry for the broadcast images. A typical ad showed a 16-inch Philco Consolette for $309.50, plus tax.

The coming of television was hyped in print as well. One news account in the Kansas City Star touted the opening of the Star-owned WDAF-TV as “an innovation of epic proportions” that put together the best of radio, stage, movies and information “in one slick package and delivers them to Everyman’s living room.

“It is a trite but true phrase that nobody is ever the same again after TV arrives,” the report stated.

During the 1950s and early 1960s, KU produced numerous shows that were used by WIBW-TV in Topeka, Linton said. But by the mid-1960s, programming time was too expensive, and affiliates stopped taking shows from KU, he said.