The city’s colorful history is coming to life in East Lawrence.

Work began last week on a mural at Municipal Stadium, 11th and Delaware streets, that depicts key events and ideas throughout Lawrence’s 150 years.

“The hard part was not coming up with things to put in the mural; the hard part was leaving things out,” said Karl Janssen, a former neighborhood resident who helped paint Friday morning.

The mural’s five panels stretch deep into the area’s history, depicting American Indians and buffalo that lived along the Kansas River before white settlers arrived in 1854. The city’s agricultural history, the rise of Kansas University and 1960s protests are among other scenes that made the cut.

Dave Loewenstein, a Lawrence muralist who is overseeing the effort, said a lot of research went into making the mural.

“It was a collaborative design,” he said. “Starting in March, we had meetings in my studio of people who were interested. We talked about East Lawrence — its history, its economy, its culture — all different aspects of the neighborhood.”

The research turned up photos of early Lawrence and involved trips into the archives of Haskell Indian Nations University.

“I’ve mostly learned a lot about the history of Lawrence,” said John Rasmussen, an East Lawrence resident who also helped paint Friday. “The main thing is how central Lawrence was in the period leading to the Civil War.

“We try to indicate that (in the mural) with concentric circles leading from Lawrence; what happened here had shock waves for the rest of the country.” 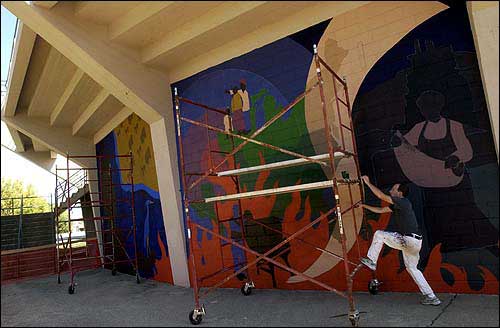 Lawrence artist Dave Loewenstein prepares to paint a large sectional mural on the walls at Municipal Stadium, 11th and Delaware streets. Loewenstein worked Friday on the mural, which he said was a collaborative design featuring concepts from Lawrence's 150 years.

Loewenstein said he and other artists first proposed a mural for the stadium’s walls about 10 years ago. Energy surrounding the city’s sesquicentennial and the enthusiasm of volunteers helped make the proposal a reality, he said.

“The idea’s been around a long time,” Loewenstein said. “It’s nice to see it happen.”

Loewenstein has been seeking painters for the project within the community. 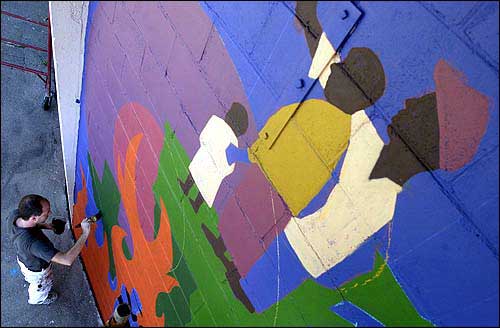 The five panels on the Municipal Stadium mural include images from the city's origin 150 years ago to political protests of the 1960s. With good weather, the mural -- painted at left by Dave Loewenstein -- could be complete by mid-October.

“No talent required,” he said. “And you can say you had a hand in the process, which is really neat.”

If good weather holds, the mural could be complete by mid-October. An additional piece of the mural, compiled from suggestions offered by neighborhood children, will be added in the spring.

“I think it tells a history of East Lawrence as a very active community, a community that’s very inclusive of people of different cultures and backgrounds,” Janssen said.

“I think the neighborhood’s going to be real happy with the end result. Hopefully it’s going to be a source of pride for the community.”