Don’t bother sending an e-mail to Haskell Indian Nations University. It won’t get through.

The university’s Web site is down, too.

The U.S. Department of Interior pulled the plug Tuesday on the university’s access to the Internet after a federal judge ruled the department hadn’t done enough to protect its computer system from hackers.

The department’s handling of the trust accounts is the subject of a 1996 lawsuit — Cobell v. Norton — filed on behalf of more than 300,000 American Indian landowners seeking tens of billions of dollars in damages dating back to the 19th century.

Lamberth wrote: “The interest of the 300,000-plus current beneficiaries of the individual Indian trust outweigh the potential inconvenience of those parties that would otherwise have access to Interior’s Internet services.”

The ruling affected Haskell because the university is governed by the Bureau of Indian Affairs, which is part of the Interior Department.

The university’s access to the Internet is through the BIA office in Albuquerque, N.M.

“We’ve not been told when we’ll be back up,” Fire said. “I doubt that it’ll be anytime soon.”

Losing the Internet was causing more than a few headaches.

“The library’s catalog is connected to the Internet, so it’s down — so is access to the interlibrary loan program,” said Haskell spokeswoman Lori Tapahonso. “They’ve gone back to checking books out by hand.

“A lot of students are working on their final research projects. And now they don’t have access to the Internet; they’re going to have to go to either the public library or to KU.”

Haskell’s communications with the BIA and other federal and tribal agencies have been crippled.

“So much of that was done by e-mail,” Tapahonso said, noting the university’s staff, faculty and students cannot send or receive e-mails on campus. Those with accounts through Haskell’s Web site cannot access their e-mail at all.

The disconnection is not expected to interfere with Haskell employees getting their paychecks on time.

“That’s handled by an internal system,” Fire said. “But there will be some people who won’t be getting their statement electronically.” 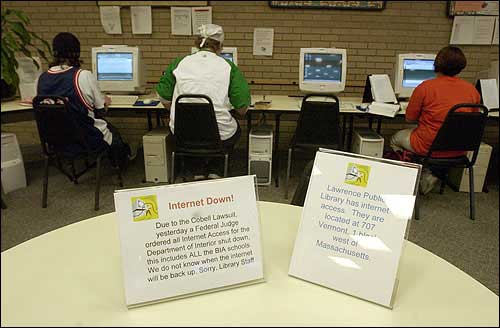 Haskell Indian Nations University students found themselves without e-mail contact with family and friends Wednesday and couldn't do any Internet research on campus. The Interior department pulled the plug Tuesday on all its agencies, including the Bureau of Indian Affairs, under which Haskell falls.

Student-aid transactions are expected to slow down.

“All of that is done on the Internet. You go online, fill out the forms and it’s done,” said Kyle Holden, a Creek-Commanche freshman from Norman, Okla. “Now we’re back to the old-school days where it takes 10 or 15 days to get your money. This isn’t cool when it comes to financial aid.”

Kerrie Blevins, a Cherokee sophomore from Broken Arrow, Okla., said many students would be hard-pressed to finish their class projects without the Internet.

“It doesn’t sound like a big deal to just go to KU or the public library,” she said. “But if you go to KU, you have to pay $15 for an ID, and a lot of students don’t have that kind of money. And they don’t have cars, so it’s asking a lot for them to walk all the way to the library downtown. They’ll have to catch rides or take the bus — the bus costs money, too.”

Not the first time

The shutdown Tuesday was the third since 2001, when a court-ordered investigation found that hackers could easily steal money from the system used to calculate royalties.

Lamberth made it clear Monday he was miffed by the Department of Interior’s response to continuing security concerns.

In his order, Lamberth wrote: “The feigned indignance of Interior aside, there is simply no other alternative (to the shutdown). Interior brought this on themselves.”

In a statement faxed to major media outlets, a Department of Interior spokesman said Lamberth was embarking on “a new frontier in this court’s efforts to run the operations of the executive branch.”