Not even a connection to Kansas’ most famous astronomer could save the Pitt telescope from an unceremonious demise.

It was October 2001, and a leaky Lindley Hall roof and Lawrence light pollution had rendered the 1929 telescope — which had been refurbished by Pluto discoverer Clyde Tombaugh — nearly useless. It was dismantled and put into storage.

Now, a group of amateur astronomers has secured NASA grant funding to give the lenses from the old telescope new life. They’re working to build a new telescope to track asteroids that could be on a collision course with Earth.

“Recycling the history is one of the most important parts of this project,” said Gary Hug, principal investigator with the project. “I don’t think it’s benefiting us much financially to use the optics. But it’s the history of it; we’re keeping the tradition alive.”

The Northeast Kansas Amateur Astronomers League, based in Topeka, received a $56,060 grant from NASA’s Near Earth Objects (NEO) tracking program, which uses amateurs around the world to determine exact coordinates of asteroids that typically have been found by professional astronomers.

The astronomers’ group is contracting with ScopeCraft in Kanab, Utah, to build a telescope that will be slightly more than 27 inches in diameter and 9 feet 3 inches long and will weigh 1,600 pounds.

The telescope will be housed at Farpoint Observatory, which is southwest of Topeka near Auburn.

The telescope uses the original 27-inch mirror and other optical components from the early KU telescope, which was financed by Kansas City businessman William Pitt. The mirror is 6 inches thick in the center.

“Most people don’t use glass that thick anymore,” Hug said. “In a way it’s sort of a dinosaur.”

Grinding new glass for the telescope wouldn’t have been terribly expensive, Hug said. But he wanted to keep the legacy of both Tombaugh and the Pitt telescope alive. 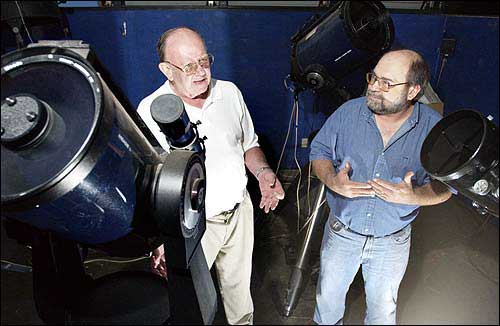 Graham Bell, left, and Gary Hug of the Northeast Kansas Amateur Astronomers League have secured funding from NASA to track asteroids. They will use optics from a historic KU telescope for the task. The astronomers are pictured at Farpoint Observatory near Auburn, where the telescope will be housed. BELOW, KU physics and astronomy professor N. Wyman Storer, bottom, and a student use the the historic telescope in 1958.

In some ways, the Pitt telescope always had a rough life.

The telescope was built for KU researchers to put in an observatory that stood approximately where present-day Budig Hall sits. Coincidentally, it was built to search for asteroids, said Steve Shawl, professor of physics and astronomy.

“As it ended up, so far as I can tell, it was never used for it,” he said. “Part of it, I guess, was the location (in light-polluted Lawrence). Part of it was the time constraints on the part of the faculty, and part of it was lack of support to get things going.”

The telescope’s 27-inch mirror was delivered to KU in 1929 and at the time was the first telescope to have its main light-gathering element made of Pyrex.

But it took a decade for the details of the telescope to be completed and dedicated.

Tombaugh, who spent his high school years in Burdett, came to KU as an undergraduate student in 1930, shortly after he discovered Pluto near Flagstaff, Ariz.

After graduating with a bachelor’s degree, Tombaugh went on to complete his master’s work at KU. His master’s thesis involved adding a new viewfinder and other improvements to the instrument.

It took only five years after its 1939 dedication for the telescope to be put in storage, when the former observatory was demolished. It was reinstalled in 1952 on the roof of Lindley Hall, in an addition that would later be named the Clyde Tombaugh Observatory.

But by the late 1990s, the condition of the observatory had deteriorated to the point that KU officials opted to remove it. The telescope has been in storage since.

KU astronomy faculty and students now do their stargazing on the roof of Memorial Stadium, with hopes of raising about $200,000 in private funds to build an observatory in the county. 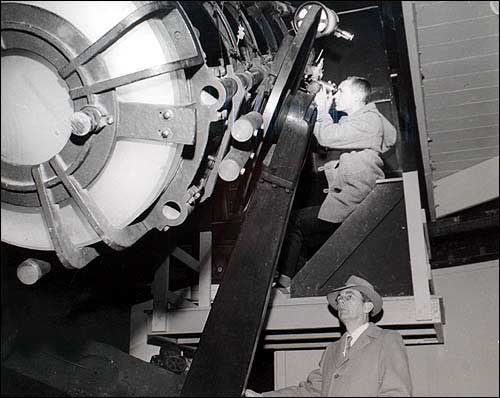 The astronomers’ group pursued the NASA grant at the suggestion of Bruce Twarog, another KU astronomy and physics professor, who knew the optics from the Pitt telescope might be available.

The amateur astronomers have been at Farpoint Observatory since 1996, and have been tracking asteroids during that time using other telescopes and computer equipment. Hug and Graham Bell, the group’s president, also discovered a comet.

“They’re doing something right,” said Lindley Johnson, a KU graduate who now directs the Near Earth Objects program for NASA’s office in Washington, D.C. “Certainly by and large, the grant funding from NASA goes to professional astronomers.”

The new instrument, which will be called the Clyde Tombaugh Telescope, will allow the astronomers to track more asteroids and report their whereabouts to the Minor Planet Center at Harvard University. Amateur astronomers from around the world are engaged in similar projects.

“It’ll allow them to see dimmer objects, either asteroids that are smaller or farther away, which will make more asteroids accessible and allow them to contribute more to the Minor Planet Center,” Johnson said.

Hug, of the astronomers’ group, said statistics show the probability of an asteroid hitting Earth is minuscule. But the fact it’s happened before — most notably, the asteroid commonly thought to have caused the extinction of dinosaurs — makes the long nights at Farpoint Observatory worthwhile for the amateur astronomers.

“This is good for the Earth,” he said. “Humanity might get some benefit from what we’re doing.”