Oskaloosa ? It’s been nearly 30 years since two men seining for bait near the Delaware River found a garbage bag containing the decomposed body of an infant girl.

The baby, only a few weeks old, was never identified and was buried in Oskaloosa’s Pleasant View Cemetery, where it has remained mostly forgotten and without a stone marker.

But former Jefferson County Sheriff’s Officer Orin Turner never forgot and always hoped that one day, at the very least, the grave would get a marker. Earlier this month Turner watched as a donated stone marker was set in place.

“It kind of gives me some closure,” Turner, 61, said during a recent interview. “We never did find out who the girl was or anything about her, and this kind of makes me feel better. It has bothered me for a long time.”

Moreover, the sheriff’s office is restarting an investigation to try to find out the girl’s identity and how and why she was abandoned.

“I’m not going to be pessimistic or optimistic about it, but we’re going to give it a try,” Sheriff Roy Dunnaway said.

A pathologist’s tests were unable to determine the race of the baby. The pathologist, however, did think that the baby was alive when it was placed in the bag, Turner said.

Quest for a marker

In May 1977, when the baby’s body was found in the Walnut Creek arm of the Delaware River, there were few leads to go on, recalled Turner, who was undersheriff at the time. Checks were made with area hospitals about newborn babies, but nothing that would help the investigation was uncovered. 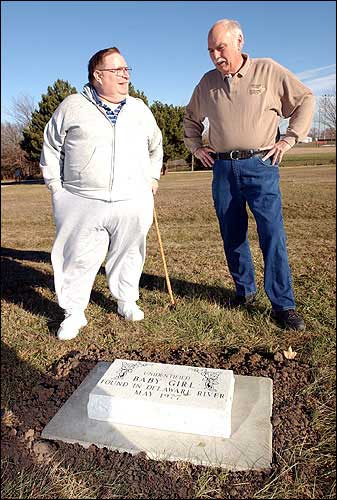 Orin Turner, left, and Jefferson County Sheriff Roy Dunnaway talk about the new grave marker for an unidentified baby found in the Delaware River in 1977.

Turner left the sheriff’s department in July 1977 to go into business, thus ending the investigation. He rejoined the department in 1981 and then retired in 2002.

A few years ago Turner mentioned the unidentified baby to a friend, Paul Strube, a Holton resident who installs burial monuments. Turner said he’d like to get a stone marker for the baby’s grave. Turner wanted to pay for the stone, which would cost several hundred dollars, Strube said. Strube filed a work paper on the request but kept putting it off for various reasons.

“It was in my folder, but it was one of those things I didn’t really know how to approach it because I really didn’t feel like Orin ought to have to pay for it,” Strube said. “He just flat out said, ‘I don’t care, I want to do it.'”

In late November, after Turner’s brother, Howard Turner, again mentioned the stone to Strube, he decided to do something about it. Strube talked to Hutton Monuments of Topeka, and the firm quickly agreed to donate a stone marker. Strube and an employee, Eric Hallauer, then set the stone. Although the grave was initially marked with a small piece of tin, it had long disappeared. Gus Barnett, of Barnett Funeral Home, had to take some measurements to find the grave’s exact location.

Few leads to go on

A sheriff’s officer now assigned to the case of the unidentified girl has a couple of leads to check, but there is not much more to go on now than there was in 1977, Dunnaway said. He declined to discuss the leads, but said it was information that, though not new, had come up since 1977 but was never followed up on. 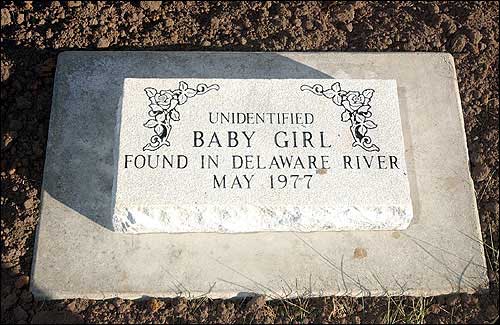 The grave marker for the unidentified baby girl was donated by Hutton Monuments of Topeka and marks the child's grave at Pleasant View Cemetery in Oskaloosa.

A key factor in the investigation could turn out to be tissue samples taken from the body and which have been kept on ice all this time. That could lead to DNA testing if the opportunity occurs, Turner and Dunnaway said.

“You’re hoping that people, as they get older, life just seems to look different,” Dunnaway said. “It may be bothering somebody, something they can’t live with because of their feelings.”

“I’m hoping this will get somebody out there who will say, ‘Hey, I know what happened,'” Turner said.

Although it is possible criminal charges still could be filed against whoever dumped the baby in the creek or river, that would be up to a prosecutor, Dunnaway said.

“I think the main thing right now is to find out who she (baby) is,” he said.

Anyone with information that could help the investigation should call 785-863-2351, Dunnaway said.