Historical facts, traditions and trivia about the Jewish Festival of Lights

Hanukkah is the festival of rededication in Judaism. It’s also known as the Festival of Lights.

What does the word ‘Hanukkah’ mean?

When is Hanukkah celebrated?

Hanukkah starts on the 25th day of Kislev, the ninth month of the Jewish year. Kislev occurs in November to December and has 29 or 30 days, depending on the year. This year, Hanukkah started at sunset Tuesday.

What is a menorah?

A menorah is a candelabrum. It’s one of the oldest symbols in the Jewish faith. A menorah with seven branches, each holding a candle, is used during religious services in a temple, and a nine-branched version is used during Hanukkah. In this version, one candle, called the shamas, or servant, is set apart from the other eight candles and is at a different height.

Why is Hanukkah celebrated?

The origins of Hanukkah are traced to 165 B.C. King Antiochus IV of Syria oppressed Jews, desiring that they would assimilate to many aspects of Greek culture and Hellenistic life. Antiochus massacred Jews, prohibited the practice of Judaism and desecrated the altar of the temple of Jerusalem. Two groups of Jews joined together, led by Judas Maccabee, and revolted to overthrow the Syrian armies.

When they went to rededicate the Temple after the rebellion, they found little oil left for the menorah, which was to burn every night. There was only enough oil to burn for one night, but the menorah stayed lit for eight days — the time it took to prepare more oil. Hanukkah is celebrated for eight days to commemorate this miracle.

How is a menorah used during Hanukkah?

Where should the menorah be placed?

Traditionally a menorah should be displayed in the doorway of a house or in a window facing the street to best publicize the miracle of Hanukkah.

Are candles placed in a particular order?

The candles are added to the menorah from right to left — the direction Hebrew is read. They are lit from left to right — to honor the newer first.

Another explanation for the order of placing and lighting the candles is that it gives equal importance to each side of the menorah, symbolizing God’s presence everywhere.

What is the significance of the name ‘Maccabee’?

According to one explanation, the word “maccabee” is derived from the Hebrew word for “hammer.” Judas, the leader of the rebellion against the Syrians, was given the name Maccabee because of his ability to strike blows against his enemies.

Maccabee also is an acronym for the phrase “Mi kamocha ba’elim Adonoy,” which means “Who among the mighty is like Thee, O God.” Some say that “maccabee” was the battle cry of the Jewish people in 165 B.C.

What are some Hanukkah traditions?

Gift-giving isn’t a traditional part of Hanukkah. The only traditional Hanukkah gift is gelt, which is small amounts of money. Gelt also can be foil-covered chocolates, often used when playing another tradition, the gambling game called dreidel. A more recent custom for some families is to give children small gifts each night of Hanukkah.

What is a dreidel?

A dreidel is a wooden top with one Hebrew letter on each of four sides. The word dreidel is derived from the German word “drehen,” which means “to turn.” In Hebrew, the word for dreidel is “sevivone,” which comes from the verb meaning “to turn.”

What do the symbols mean on a dreidel?

The four Hebrew letters on the dreidel are Nun, Gimmel, Heh and Shin. The letters supposedly stand for the phrase “Nes Gadol Hayah Sham,” which means “A great miracle happened there” — referring to the miracle of the oil. On Israeli dreidels, the letter Shin is replaced by Peh, which stands for Po, which means “here.”

How do you play dreidel?

The letters on a dreidel also stand for the Yiddish words nit (nothing), gants (all), half (half) and shtell (put). These letters are also the basis for the general rules of the dreidel game. Everyone puts in a coin, and someone spins the dreidel. Then, depending on what symbol lands face up:

In one variation of dreidel, every player puts in a coin if the pot is empty, and you play until one person has the entire pot. Then you redivide it.

What kinds of foods are eaten during Hanukkah?

Traditional foods eaten during Hanukkah include fried foods such as potato latkes, or pancakes, and jelly doughnuts, called sufganiyot. Fried foods are significant, because they are representative of the importance of oil to Hanukkah.

Why are cheese dishes eaten during Hanukkah?

Cheese dishes, such as cheese pancakes, pay tribute to the story of Judith, a Jewish heroine. Judith fed cheese to Holofernes, an enemy of the Jews. The salty cheese made Holofernes thirsty, so he drank wine. When he became drunk, she cut off his head, saving her people.

Why are Hanukkah decorations often blue and white?

The colors blue and white are the colors of the Israeli flag.

How important is Hanukkah?

Hanukkah is not a major holiday in the Jewish faith. Its religious significance is far less than that of holidays such as Rosh Hashanah, Yom Kippur and Passover. Hanukkah receives more attention than other holidays from non-Jews, largely because of its proximity to Christmas. The only religious observance related to the holiday is the lighting of candles.

Why is it acceptable for Jews to work on Hanukkah but not on other holidays? 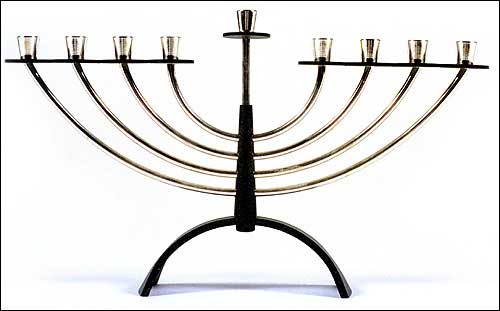 Hanukkah candelabrums can be found in many styles, from ornate antiques to sculpture-like modern pieces.

Jewish people do not work on full holidays, which are mentioned in the Bible. The story of Hanukkah occurred after the Bible was written, so it is not considered a full holiday.

Are there any Hanukkah songs?

A few traditional Hanukkah songs are “Maoz Tzur,” known to Christians as “Rock of Ages”; “Mi Y’maleil?,” which means “Who Can Retell?”; and “Hanukkah, Oh Hanukkah.”