A former White House aide and campaign strategist has been picked to lead the Dole Institute of Politics at Kansas University.

“Bill Lacy has a wealth of experience in American politics and a clear vision of the possibilities for the Dole Institute,” Chancellor Robert Hemenway said Tuesday.

The appointment was to be officially announced today.

Lacy got out of politics in 1996 after resigning from Dole’s campaign. He has spent the past seven years in Olathe, serving as vice chairman and CEO of Sophie Mae Candy Co., a business operated by his family. The family is in the process of selling the company.

Lacy, who will be paid $150,000 a year, will replace Steve McAllister, the KU law school dean who has served as interim director since October. That was when Richard Norton Smith, the presidential historian who held the job for two years, left the Dole Institute to lead the Abraham Lincoln Library and Museum in Springfield, Ill.

“Bill is the right person at the right time to lead the Dole Institute of Politics and continue to make it the premier forum for public discourse it was intended to be,” Dole said. “He has extensive experience in the real-world side of politics. He will bring that knowledge and his ability to make it real to the advantage of the students at KU, the state of Kansas and the rest of the country.”

Lacy said he gave Hemenway a commitment that he would stay at the institute for five years. 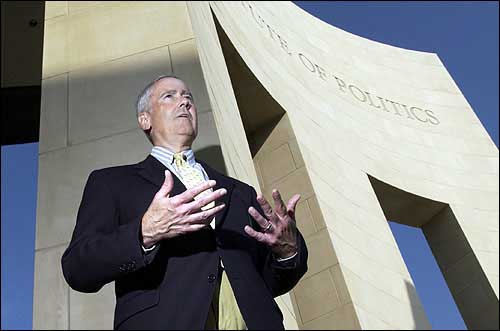 Bill Lacy, a former aide to President Reagan and Sen. Bob Dole, is the new director of the Dole Institute of Politics.

The Dole Institute is an $11.3 million, 28,000-square-foot facility on KU’s west campus. It houses 4,000 boxes of papers and other materials from Dole’s political career and an exhibit on the former senator and presidential candidate. University leaders have said they hoped the institute could serve as a nonpartisan center for political discussion.

But Smith’s departure shortly afterward left many with questions about the institute’s future and the university’s commitment to it.

Smith, who has questioned KU’s commitment to the institute mainly in the areas of fund-raising, said Tuesday he thought Lacy’s hiring was a “ten-strike.”

“Bill’s a guy who brings an enormous credibility to the institute,” Smith said. “He has Dole’s confidence, which ought to be the No. 1 qualification. He’s a guy who has practical, real-world experience in the political arena. That’s always a useful perspective, and I think at the same time he’s a guy who will think big. I think you’ll see some exciting programs.”

Lacy said he wanted to add to programming already in place at the institute. That includes the popular Presidential Lecture Series, which he hopes to expand from historians to include those who have been active in politics; the Dole Lecture, which brought former President Bill Clinton to the city in May; and the Dole Leadership Prize, which will bring former Sen. George McGovern to campus next month.

The institute also needs to add smaller-scale programs such as brown-bag lunches to discuss political issues, Lacy said. And he said he wanted to get more students and faculty involved.

“We’ve hit a lot of home runs out here,” he said. “We’ve had Clinton in and the dedication last year. My job is to come in here with the programming and hit singles, doubles and triples. It’s great to have 20,000 people here to see a former president. But it’s equally great to have 10 or 15 people sitting and talking to a political practitioner to learn about how he creates polls or writes a speech.”

Lacy said he didn’t expect any staffing changes at the institute.

Burdett Loomis, professor and chairman of political science and a former interim director at the Dole Institute, said he considered Lacy an “unexpected hire” and “someone who wasn’t on a lot of people’s radar screens.”

“He seems like a nice guy,” Loomis said. “But there’s no academic background, and there’s no fund-raising background. I would say he’s got a daunting task in front of him. I think (the institute), in general, has great potential, but in terms of getting things going, there’s a lot of work to be done.”

And that will take money. Smith, the former director, has said the university should raise a $20 million endowment to keep the institute’s programs operating. So far about $4 million has been raised, and there hasn’t been much fund-raising activity since Smith left.

Seuferling said he hoped the institute would create a national board of advisers, which could help with fund-raising.

Lacy said he thought $20 million was still an appropriate goal.

“I’m not a fund-raiser,” he said, “but I’ve never been in a campaign where I didn’t need money to buy TV spots at the end of the campaign.”

Polly Bales, of Logan, a longtime Dole friend and Dole Institute donor, said she hoped Lacy would give the institute the stability it needed for long-term operation.

“Bob’s vision for what it should be is a vision across political lines, for the development and furthering of not only the institute but the university, state and the country,” Bales said. “The Dole Institute can really be a facility with a means for helping Bob’s ideas come true for a richer, better, more productive state.”