Filmmaker has eye on education

Ranjit Arab, a publicity manager for University Press of Kansas, has spent his spare time making films. Arab and his partner Aaron Paden completed “El Jardin,” which means The Garden, earlier this year. The film won the best documentary award at the KAN Film Festival in June.

A: “El Jardin” examines the recent attempts of State Board of Education member Connie Morris, who tried to get children of undocumented workers removed from the public schools despite a U.S. Supreme Court decision that said the children must be educated. The film focuses on the community of Garden City, Kansas, which has dealt with a major influx of immigrants yet continues to do an excellent job of educating every child.

Q: Does the immigrant experience have special meaning for you?

A: Definitely. My parents came to America in the ’60s from India, and even though they came through the legal channels, you know I still have an understanding of what it means to be an immigrant or how difficult it might be to get documentation. It’s not just a black-and-white issue. You know there are a lot of subtleties involved. It’s very difficult. A lot of times people apply for citizenship, but the bureaucracy is so bloated, it takes a long time. So what are they supposed to do in the meantime?

There’s sort of a dual role for immigrants. On one hand, they’re sort of needed to help stabilize our economy, to hold jobs that most people don’t want for the wages they won’t take. On the other hand, they’re very neglected — ignored. It’s almost as if we’re doing them a favor by having them here. But on the other hand, it’s also that they’re doing us a favor in some ways. So it’s a very tricky situation, and I think being the son of immigrants helped me appreciate that.

Q: What role does race play in the education debate at the heart of “El Jardin?”

A: Unfortunately, it plays a very large role. Because these people are often a different race or speak a different language than “white, mainstream America,” many Americans fail to see them as humans. They’re only identified by labels like immigrant, foreigner, alien, worker, etc. This has the effect of dehumanizing these people, making it easier to deny them very basic human rights.

Q: What do you think of race relations in Lawrence? In Kansas? 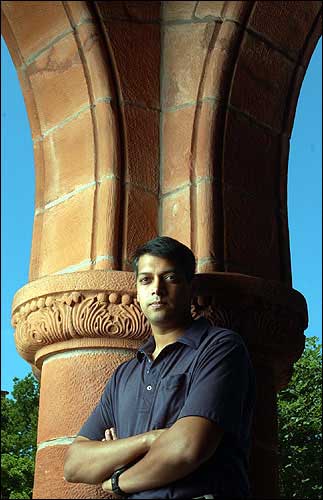 A: For the most part, I think race relations in Lawrence are good. Lawrence is a pretty progressive town by most standards. The student population and the businesses here mean there’s always a lot of diversity within the population. In fact, I found that people throughout Kansas were pretty tolerant — if not welcoming — of other people and other cultures.

The problem I discovered is that most of these racist, anti-immigrant sentiments are being propped up by forces outside our state — by national organizations that feel that Kansas is a battleground state, much like it was in the pre-Civil War days — and so they’re pumping in a lot of money to support these fringe candidates with radical views that don’t necessarily represent the views of the majority of Kansans.

Q: How is Lawrence at fostering cultural diversity?

A: I think KU does a good job of promoting cultural diversity, especially through the arts, and that goes a long way toward helping Lawrence.

A: As the film shows, I think Garden City, Kansas, provides a great example of a community embracing cultural diversity. Sure, it has its share of problems, but Garden City has really gone out of its way to provide education for these kids. But it has done so only because there are a lot of people there who are willing to go the extra step: They volunteer in the schools, they volunteer at their church.

It’s easy to sit back and complain about the changing nature of America, but where does that get us? It’s much more productive to say: “For whatever reasons, we’re becoming more dependent on this immigrant work force. We better figure out a way to deal with it.” These people aren’t going to stop coming to America because businesses rely on their cheap labor, so we need to help these people become productive members of our society — and making sure they are educated is the first and most obvious step toward that end.

Q: What can be improved?

A: Education. Not just education in the classrooms, but I also mean education in the form of public awareness. I don’t expect people to change their mind overnight on the immigrant issue, but I think they owe it to themselves — and to the state — to really examine the issue from both sides of the debate. Look around, you’ll see immigrants working on construction sites, in the service sector, even in high-tech jobs; they play a key role in making sure our state economy doesn’t fall apart, so we should at least acknowledge that and figure out a way to utilize their strengths without exploiting them.

Q: What do you see on the horizon for immigrant children here in Kansas?

A: Well, I’m grateful that Gov. Sebelius and the state Legislature recently passed the law that will allow some of these students to get in-state college tuition at the state universities, provided they have lived in Kansas for at least three years and can prove they are working toward gaining legal status. However, I know a lot of anti-immigrant groups are trying to challenge that, so the future for these students is still very much up in the air. Still, it’s good to see that some positive steps are being taken.

Q: What were your goals for “El Jardin”?

A: My only goals for the film were that it reach the largest audience possible, that it reach educators throughout the state, and that it make people re-examine their views on the role of immigrants in our state. By those standards, I’d say the film has been quite successful.

Q: What did you learn from doing “El Jardin”?

A: I learned that there are a number of wonderful, socially committed people in Kansas — across political party lines, social classes, and race — who simply want a reasonable discussion on this issue. I also learned that the majority of Kansans are unaware of the economic contributions that immigrant workers often add to our state economy.

Q: What’s on the filmmaking horizon for you?

A: We’re in the research phase of making a sequel to “El Jardin” that examines the issue of providing in-state tuition for kids of these immigrants. I’d also like to eventually do a mini-history of sorts on East Indians in America.