Atlantic City, N.J. ? One aspiring Miss America took her trained pigeons up on stage. But when a stage light blew, according to pageant lore, the surprised birds flew off stage, raining droppings on the audience.

Miss Cincinnati 1943 Joan Hyldoft planned to ice skate, but her rink melted and she had to make do with just her skates, executing jumps and axels on a bare floor. Miss Montana 1949 Carol Fraser rode a palomino horse onto the Convention Center stage — and the horse stumbled and nearly fell into the orchestra pit.

For decades, half the fun of Miss America was watching jittery equestrians, trampoline jumpers and acrobats put the “miss” in misstep.

That element will be conspicuously absent this year. For the first time since the Miss America pageant hit black-and-white TV in 1954, the Sept. 18 broadcast won’t have talent routines.

Under pressure from ABC, the talent segment has been stricken from the telecast, eliminating a campy element that added drama and unpredictability in early years but has degenerated into a yawn-inducing ratings killer.

This year’s pageant will show some contestants performing their talents, but on videotape, and one who is no longer in the running will be chosen to perform live.

Introduced in 1935 and required of contestants beginning in 1938, the talent segment was aimed at showing that Miss America was more than a beauty pageant. The contest is promoted as a scholarship program.

“When it was purely amateur, it was a lot of fun,” said former pageant television producer Angela Osborne. 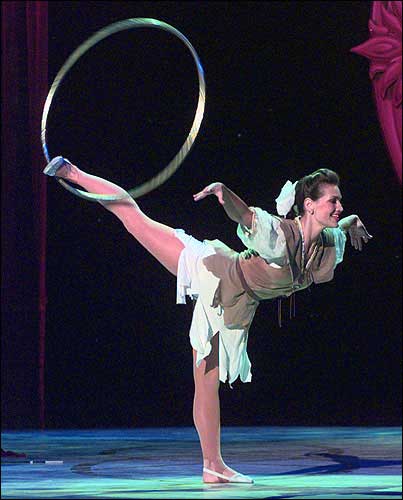 “You kind of rooted for them. Anyone can put on a swimsuit and go in front of an audience and jiggle and look pretty, but to go up there and play a Tchaikovsky concerto, it builds character.”

It also built frayed nerves for beauty queens who found themselves facing a live, nationwide television audience while dancing the samba, driving tractors and tap-dancing upside down.

“Frightening? Absolutely. But it was a growing experience,” said Miss California 1979 Deanna Fogarty, who sang in the pageant.

Contestants who couldn’t sing, dance or play an instrument had to find something to offer — and they did.

Hyldoft, the Ohio ice skater, brought a portable rink to Atlantic City. But it was accidentally left out in the sun and melted and she had to “skate” on a bare floor. She won the talent competition.

Near-misses made for some of the most compelling acts, and they also led to rules changes.

After Fraser’s act on horseback — “It was the most breathtaking, thrilling thing you’ve ever seen,” said pageant boss Lenora Slaughter — animal acts were banned.

A Miss Nebraska accidentally threw a flaming baton into the judges’ pit one year. That led to a ban on props that could hurt someone.

Then there was Miss America 1959 Mary Ann Mobley, who performed a mock striptease. She took to the stage in a gown, singing the start of an aria before stripping down to a pair of shorts and a slip to belt out “There’ll Be Some Changes Made.”

So much for stripping. It, too, was banned.

Judith Ford bounced her way to the title in 1969, executing 30-foot high flips on a trampoline. Miss America 1960 Lynda Mead won after performing a dramatic recitation about schizophrenia.

And some talent routines were downright inspirational.

In 1994, a deaf ballerina from Alabama performed a lyrical ballet to “Via Dolorosa,” taking her cues from the vibrations the music set up in the floor of the stage. The performance captivated the judges, vaulting Heather Whitestone to the crown.

“For the most part, the real bad ones are gone by the time they get to Atlantic City,” said radio newsman Tom Williams, who has covered 31 Miss America pageants. “The Miss America pageant doesn’t show its early rounds like ‘American Idol’ does. They’re eliminated in the locals and the state (pageants).”