Robert Altman lowers the barre with ‘The Company’

The very qualities that make Robert Altman great are also what make him such a frustrating filmmaker.

In “The Company,” a backstage look at the Joffrey Ballet of Chicago, Altman once again proves that he is one of the few directors with an instantly recognizable style.

The Kansas City native basks in a loose, improvised approach that is characterized by overlapping dialogue and multiple conversations going on in one environment. He also favors slow tracking shots, a muddy sound mix and quirky use of music (in this case, assorted versions of “My Funny Valentine.”)

But “The Company” is jumbled even by Altman standards.

To call this movie dramatically inert is to oversell it. This is one of the few non-experimental films that is virtually without plot. Sure, characters are introduced and events are engaged in, but the motion results in dead ends with no resolution. This is a story with no arc, no suspense, no focus.

And yet — probably because it is Altman — the film remains watchable.

The picture begins with vibrant images of dancers wielding ribbons connected to the ceiling and each other to create a choreographed routine. Backed by a score that in the 1950s would have been dubbed “futuristic synthesizer music,” the sequence establishes that the mechanics of dancing are going to take center stage, not storytelling.

Then it’s on to a few random introductions, interspersed with spirited modern ballet productions. Neve Campbell is the central character, a ballerina named Loretta who is beginning to gain more prominence within the ensemble. Malcolm McDowell portrays Alberto, the Joffrey’s artistic director. He’s a flamboyant, argumentative figure who refers to his cast as “babies” and gives advice that is simultaneously scathing and effusive. (“You’re all so pretty. You know how I hate pretty.”)

Altman is famous for letting actors tackle different mediums in his films. For instance, in “Nashville” his cast penned and performed all their own songs. Campbell co-wrote the story and does her own dancing in “The Company.” It’s no surprise to find out the “Scream” actress joined the National Ballet School of Canada at age 9. Her graceful authenticity when paired alongside real-life professionals elevates the production.

While the 10 dance sequences are largely entertaining, the movie’s best moments concern the insights into the rehearsal process. These frequent asides capture that same fly-on-the-wall feel that Mike Leigh’s “Topsy-Turvy” did with the world of live theater.

Yet Altman falls into a trap that he’s shown himself susceptible to previously. As with his abysmal “Kansas City,” in which he got so caught up in the jazz music that he forgot to concentrate on the story, “The Company” is just as narratively misplaced. Although the rehearsals and performances are scrutinized in great detail, the people behind these episodes are a complete enigma.

Loretta and Alberto are ostensibly the main characters, but they share almost no interaction. It’s hard to determine anything involving the relationships of the members within the company. Are any of them friends? Are they rivals? Are they lovers? Altman doesn’t seem to care.

It’s like the audience has been asked to attend a dress rehearsal conducted by complete strangers and told to sit in the corner and not ask questions. Even an amateur home movie of this same subject would feature some thread of a plot.

Altman also provides total non sequiturs, such as a throwaway scene in which a young male dancer asks to sleep on the floor of a co-worker. At no point does this guy have any impact on the rest of the “story.” This is footage that is ideal for the cutting-room floor.

It’s impressive that the 79-year-old director continues to be artistically prolific. However, for every classic such as “Gosford Park” or “MASH,” Altman has a disposable project like “Ready to Wear” or “Dr. T & the Women” to balance that out. Now his lesser catalog of films has even more company. 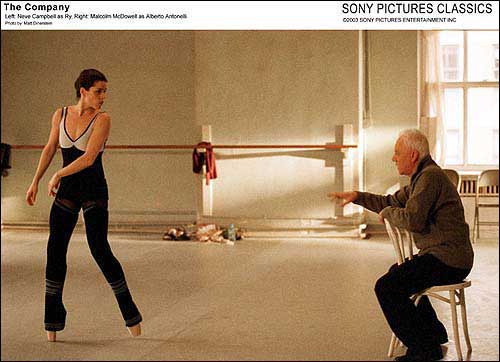 Neve Campbell, left, stars as a dancer and Malcolm McDowell is her artistic director in the backstage drama, The