An AIDS researcher, an aircraft designer and 16 freshmen were among the honorees at the 26th annual meeting of the Chancellors Club Friday night at Kansas University.

The club, established in 1977, is the major-donor organization for the KU Endowment Association. Members met at the Kansas Union Ballroom for a black-tie dinner and reception.

Chancellor Robert Hemenway told the crowd that KU was stronger than ever before. He cited record enrollment this fall despite a tuition increase as one example. 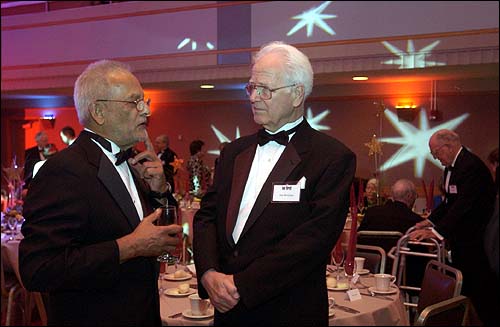 “People voted with their feet,” he said. “They said, ‘We want to go to KU even if it costs us more.'”

Opendra “Bill” Narayan, professor and chairman of the department of microbiology at the KU Medical Center, received the group’s 2003 Research Award.

The award, which includes a $5,000 prize, goes to a researcher whose work has led to significant scientific discoveries.

Narayan is known worldwide for his research to find a vaccine for AIDS. In 2001, he received a $10.5 million grant from the National Institutes of Health, the largest grant given by NIH to a KU researcher.

Roskam, who will retire at the end of the academic year after a 36-year career at KU, has been a consultant on several aircraft design projects, including the Boeing 747 passenger jet. 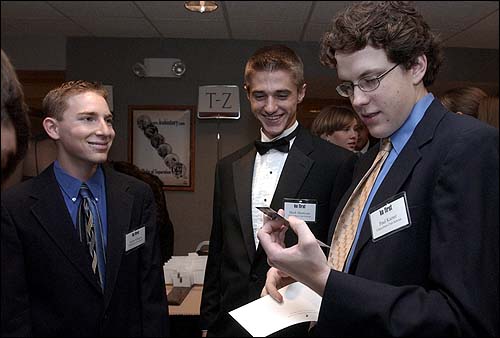 Kansas University freshmen Justin Klinger, left, from Overland Park, and Mark Mattione, center, Leawood, chuckle as Paul Karrer, Omaha, Neb., inspects a KU football ticket given as a gift from the university. The three were among 16 freshmen who received scholarships Friday from the Chancellors Club at the group's annual meeting at the Kansas Union Ballroom.

Donor Sallie Morrison said she enjoyed meeting some of the students and seeing how Chancellors Club members’ money was put to use.

“This is what we’re all about is the kids who are working hard, who are directed, who want to have fun but want to be successful,” she said.

John Scarffe, spokesman for the Endowment Association, declined to release how much the scholarships were worth or give a range of their value.