When you mention chestnuts to most people, they probably think of Bing Crosby’s 1946 hit, “The Christmas Song.”

Everyone knows the words: “Chestnuts roasting on an open fire/Jack Frost nipping at your nose …”

But Debbie Milks and Charlie NovoGradac, of Lawrence, have a little more direct experience with chestnuts than just knowing the words to a classic holiday tune. The couple have a 20-acre patch of land north of town where they grow Chinese chestnuts, pecans, walnuts and — fittingly enough — Christmas trees.

Certified organic chestnuts are really their main commercial crop, and each year the couple sell the fruits (or, in this case, nuts) of their harvest to Au Marche the European Market, 931 Mass., and the Community Mercantile Co-op, 901 Iowa.

The name of their business: Chestnut Charlie’s.

NovoGradac is so associated, in people’s minds, with his business and primary product that most folks around Lawrence simply call him Chestnut Charlie.

“It’s nice to have that identity. People don’t even know my last name,” he says.

Some might think the couple are nuts to raise this crop in northeast Kansas because few people grow Chinese chestnuts in this part of the country. But Milks and NovoGradac have been successful so far. 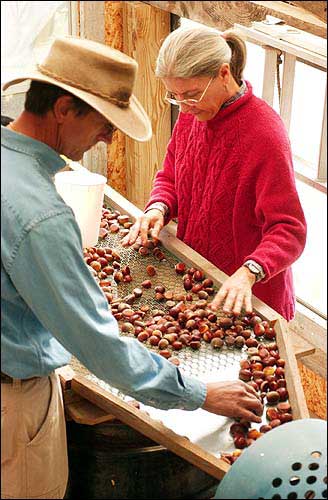 Charlie NovoGradac and his wife, Debbie Milks, sort chestnuts on their land just north of Lawrence. The couple, owners of Chestnut Charlie's, sell the chestnuts to Lawrence retailers.

The couple have about 1,000 chestnut trees, which they planted in 1995. During chestnut season this year (the nuts only fall in September and October), they hope to harvest about 1,000 pounds of chestnuts per acre.

Their chestnuts are proving to be a hit in Lawrence.

“We’ve been working with Chestnut Charlie for the last three years, and we’ve had great success with their chestnuts. It’s usually our European customers who love to buy them, but Chestnut Charlie is really good about providing usage information and recipe ideas to all our customers,” says Lora Wiley, owner of Au Marche.

“Initially, people are always surprised to find out that chestnuts are available from a local purveyor. Once they’ve tried them, they’re thrilled, and they always come back and get more.”

Au Marche sells the chestnuts, which are kept chilled in the market’s deli case, for $6.38 per pound.

They have gotten a good reception at the co-op, too, where they sell for $5.99 per pound, according to Erich Buer, produce assistant.

“They’re becoming more and more popular. We have chestnut recipes to get people started. We’ll have them through Thanksgiving,” Buer said.

Milks and NovoGradac didn’t start out in the chestnut business. They both have come to it from other vocations.

The chestnut orchard and Christmas tree farm are a second career for NovoGradac. He practiced law until 1991.

Milks, meanwhile, continues to do systems accounting consulting on a freelance basis.

The couple lived in Saipan, an American territory near Japan, from 1978 to 1995, and they still maintain a house there. They moved back to Lawrence in 1995 to be closer to family.

So, why did they get into the chestnut business?

Milks and NovoGradac have long been interested in certified organic farming methods, and their orchard has become a way to demonstrate an alternative form of agriculture that — unlike some large-scale, commercial farming — helps to sustain the land. They chose chestnuts because they wanted to raise a tree crop that they felt would be easier than growing apples. And chestnuts are versatile and nutritious.

Still, they’ve had to do some customer education about their crop.

“It’s a little bit of an acquired taste if you haven’t grown up with chestnuts. It’s something that needs to be reintroduced in the United States,” Milks says. 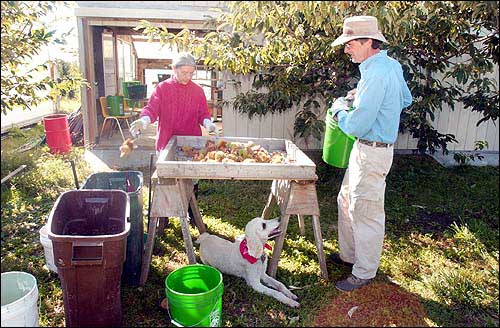 Europeans are much more familiar with chestnuts, using them in dishes served throughout the year, not just around Christmas.

“Part of the fun is hearing the enthusiastic response from anybody who’s familiar with chestnuts — usually people from China or Europe. They find us,” NovoGradac says.

“We have a neighbor who’s English, and he loves to eat chestnuts raw,” Milks adds.

Remember to score them

Chestnuts, as the Bing Crosby song suggests, are usually linked to Christmas in the United States. That’s partly because they’re ready to harvest in the fall. But the couple have found that chestnuts are a tasty addition to any number of nonholiday dishes, such as vegetarian minestrone or a vegetable stir fry. 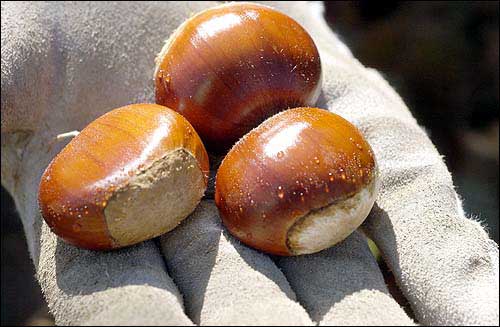 Chestnuts are versatile and can be used in many recipes.

“You just blanch them in boiling water, and that’s the easiest way to peel them. Then you take them out of the hot water with a slotted spoon, and squeeze the sides. They’ll pop right out of the skin,” Milks says.

Or, of course, you could always roast them. Some people choose to do so using an old-fashioned popcorn popper.

But it’s imperative that cooks remember use a paring knife to score an “X” into one side of each chestnut to release moisture during cooking.

So, does the couple ever really roast chestnuts over an open fire, as the famous song goes?