Wichita ? Three years ago, Wintilio Ortiz didn’t know anything about publishing — not even how to turn on a computer.

But that didn’t stop the florist — who immigrated to Wichita from Mexico in 1989 — from seeing a need for a quality Spanish-language publication to serve Wichita’s growing Hispanic community.

For a year he worked secretly on his dream to launch a magazine. He worked three jobs — saving all the money he could for his new venture.

He also bought publishing, journalism and computer books, often staying up until 3 a.m. or longer to study them.

In November 2000, the first monthly issue of Mi Gente Hoy (Spanish for “My People Today”) made its debut in Wichita. Ortiz initially printed 5,000 copies of the free publication. He now publishes 10,000 copies a month and plans to publish 35,000 copies by the July issue.

“I’m pretty good now — I do all the graphics and everything,” Ortiz said. “I know how to turn (the computer) on now.”

The magazine features stories about immigrants who came to the United States and succeeded in making their dreams come true, Ortiz said.

“Our heroes are the community — just everyday, regular people,” he said.

In May, the Spanish-language publication included for the first time English translations of its news articles — responding to demands from both the Spanish- and English-speaking community.

The move is designed to increase the magazine’s audience — targeting everyone in the area rather than just Hispanics, he said. 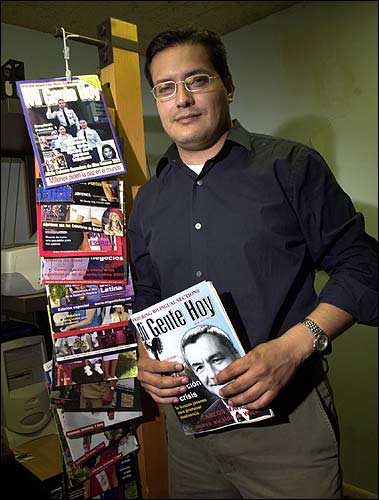 Wintilio Ortiz, the publisher of Mi

Ortiz also plans to launch in two months another magazine in Wichita that covers sports in both English and Spanish.

“We have had pretty tough months, especially with the turndown in the economy in the last six months … but I always remember World War II,” he said. “If you have the ability to get a company to take the next step and be creative, if you survive, you can be very successful in the future when better times come.”

Ortiz said his magazine was getting more advertising now — something he attributes to the quality of the publication. The May issue included full color throughout its 64 pages.

The Hispanic market is one that other media also are trying to tap: 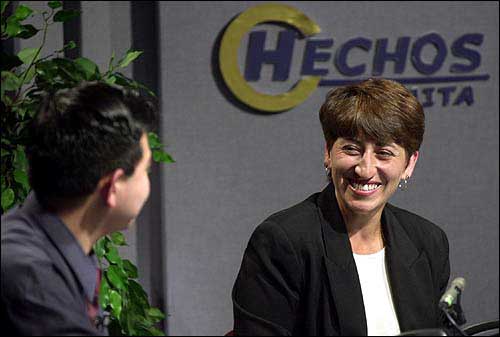 Everd Solano, left, shares a laugh with Maria Peransileft during a commercial break while on the set for the Hispanic news cast Hechos

l This month, El Perico (The Parrot) began publishing a free newspaper in Spanish and English. The paper plans to publish every two weeks.

“We were the pioneers,” Ortiz said. “Thanks to Mi Gente Hoy we have pushed other Hispanic media in the city — showed them there is a market.”

Chris Crawford, vice president and general manager for the six Wichita radio stations owned by Journal Broadcast Group of Milwaukee, said while he could not disclose finances, it has been “a wise strategic move.”

“This will evolve as local business people realize that this consumer is certainly not going to go away and that they have a real demand and ability to pay for basic goods and services that any other consumer wants as well,” he said.

The station plays regional Mexican music and has a live morning show in Spanish.

The show includes news from Mexico, the latest on sports such as soccer that are popular in Latin American countries, and other stories on topics ranging from law enforcement issues to buying a home. Local news from sister stations such as KFDI are translated into Spanish, as are traffic reports, said Beverlee Brannigan, KYQQ operations manager.

“It is the same big stories … that affect you and I on a day-to-day basis affect the Hispanic communities,” she said.

KYQQ also airs a weekly program hosted by a law firm that gives legal advice, covering immigration and other issues of interest to Hispanics.

Hispanics in the Wichita area can now tune in to a Spanish television station, KSMI. The station is an affiliate of Aztec America, Mexico’s top network. The station airs a half-hour local news program.

The station has been shut out of the cable television market because of the steep $64,000 a month charge, said KSMI news director R.J. Dickens.

But the low-power station still draws between 9,000 and 27,000 viewers an hour, plus another 3,000 viewers watching through the Internet feed, he said.

Staffing is an issue at KSMI, even Dickens works another job. Dickens uses computer translation programs to translate two or three stories for each news show, then gives the stories to his anchors who are fluent in Spanish to correct the grammar.

With Aztec America expected to resolve some legal issues with satellite dish providers by the end of the year, Dickens hopes the station soon will be available in rural western Kansas communities.

“I believe the future is yet ahead of us,” he said. “I think our best days are ahead of us.”