Who is KU’s Drue?

Drue Jennings spent 14 years as CEO of Kansas City Power & Light, often turning in 70- or 80-hour weeks to keep the lights on for thousands of households.

When his wife, Sue, was diagnosed with cancer in 1997 — and later died in September 2002 — Jennings realized he had committed too much to his job.

“It gives you a new perspective,” he said. “I’d never wish that on anybody. But if the good Lord gives you that perspective, you’d better listen to it.”

Now Jennings has been charged with keeping the lights on at Kansas University’s athletic department until a full-time athletic director is hired.

But Jennings doesn’t mind for the moment. He sees the temporary job as a form of service, similar to the service he plans to give to cancer organizations the rest of his life.

KU Chancellor Robert Hemenway and others have urged Jennings to consider keeping the job full-time, but Jennings has declined.

“I didn’t want to go back to a lifestyle where I just completely surrendered by calendar,” Jennings said. “You pretty much give up your time to your job. I took this job because it would be helpful and let me give back a little to the university I owe a great deal.” 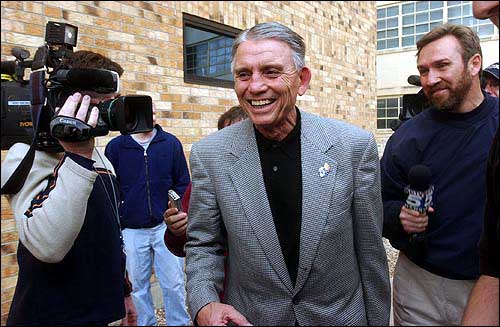 Kansas university interim athletic director Drue Jennings, center, seen avoiding the media Easter Sunday at KU, has made an impact by helping the Jayhawks hire Bill Self to replace Roy Williams as men's basketball coach. Jennings, a former CEO of Kansas City Power & Light, has said he doesn't want to be the Kansas AD on a permanent basis.

Jennings, 56, grew up in Kansas City, Kan. He played basketball and football and ran track at Argentine High School.

He also came to Lawrence to watch KU football games, which hooked him on the idea of being a Jayhawk.

In 1964 he enrolled at KU; he was a defensive back on the football team and had hopes of being a track sprinter. He pulled his hamstring during his first winter on the track squad and decided to put away his running shoes.

Jennings was far from a standout college football player. He started a few games at the beginning of both his junior and senior years.

“I got beat deep too many times and lost the starting assignment,” he said.

He also was on the punt and kickoff return teams.

Don Fambrough, an assistant coach during the 1960s, could tell there was something special about Jennings by the way he handled himself on the field and in the locker room.

“Drue was always a very intelligent young man,” said Fambrough, twice a head coach at KU in 1971-74 and 1979-82. “He didn’t have what you’d call a lot of football ability. At the same time, he was the type of young man every coach would like to have on his squad, with his leadership ability.

“You knew he’d give 100 percent effort in whatever he did. He proved that after school in the type of leader he is right now.”

Jennings said the highlight of his college career was defeating Missouri at home in the last game of his senior season.

“It was a super feeling to do that,” he said. “I remember how good it felt to play competitive football. I think we all dream of that same thing coming back here. I know these kids will have so much more fun when they’re not being eliminated from the get-go.”

Jennings always assumed he’d be drafted to serve in the Vietnam War after graduating in 1968. That proved wrong.

He’d been deaf in his left ear since birth, and that was enough to keep the Army from asking him to serve. He spent a year as a government teacher and assistant coach at K.C. Wyandotte High School before returning to KU to attend law school.

He graduated with a law degree in 1971 and spent several years in private practice before applying for an attorney position at Kansas City Power & Light.

“I suspect at the time it was because it paid more than I was making in private practice,” Jennings said. “There was the lead attorney, the associate counsel and the go-for, which was me. I worked there many months before I got a weekend off. I walked into a buzz saw.”

The move proved to be good for Jennings’ career. He gradually worked his way up the ladder before becoming president and CEO in 1987 at the age of 40.

Jennings earned a reputation for being an honest, fair leader.

Dick Bond, a former legislator and current member of the Kansas Board of Regents who has served on several community and church boards with Jennings, called Jennings a “class act.” 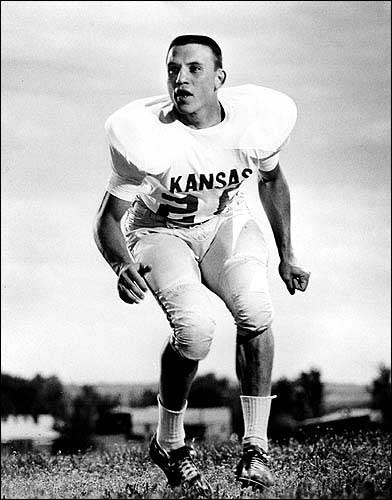 Drue Jennings was a defensive back at Kansas University from 1963 to 1967. He said the highlight of his KU career was defeating Missouri, 17-6, at home in the final game of his senior season.

“He is strong but gentle,” Bond said. “He is very thoughtful and he does not take a job unless he knows he can do it right.”

“There’s an intensity about Drue that’s very difficult to miss,” Clark said. “It’s not severe, it’s more an intensity of purpose. Of all the people I’ve met in CEO positions, he’s one of just a couple who follow the chivalric code of honesty, generosity, loyalty and courtesy.”

Clark said Jennings was scheduled to speak at a leadership class taught by Clark in 1997. The class was the same day KCPL announced merger talks with Western Resources, Sue Jennings had just been diagnosed with cancer and Drue Jennings was ill. But he still spoke to the class.

“He didn’t have to show up,” Clark said. “He had one helluva long day, he had the concern for his wife and he was sick. When he makes a commitment, he lives up to the commitment.”

By the late 1990s, Jennings started to grow weary of his CEO position.

“With the CEO job, it paid well, you got credit, you got recognition and you got the blame,” he said. “I loved that job, but it’s a very demanding one.”

When Sue’s health took a turn for the worse in 2001, he decided to leave KCPL. They made a pact to take at least one “field trip” to places such as museums each week.

Bond has seen the toll Sue’s death had on Jennings.

Jennings began considering returning to part-time legal work and getting involved in charities such as Hope House and Cancer Action, which provide emotional support for families dealing with cancer.

Then Hemenway called in March, asking Jennings if he’d consider stepping in as interim athletic director if he decided to fire Al Bohl. Hemenway knew Jennings through Jennings’ activity on the boards of the KU Alumni Association and Endowment Association.

“I wouldn’t say it took arm-twisting,” Hemenway said, “but it took several conversations to convince him to do it.”

“I was pleased he said he’d do it,” Hemenway said. “I just had such great respect for the way he conducts himself, his ability to attack a problem and his commitment to ethical analysis. The focus isn’t on what to do, but what’s the right thing to do.”

Now that Self has been hired, Jennings has turned his attention to the athletic department budget for the next fiscal year.

He said he spent most of his days meeting with staff and donors, and with a variety of public appearances, such as the basketball awards banquet or next week’s academic awards banquet.

“I can’t be happy just tending shop,” Jennings said. “When I came I told everyone here I did not take the job to simply mind the store or keep the lights on in the office. There was work to be done, and I intended to do it.”

Jennings also will serve as the chief staff member in Hemenway’s search for a new athletic director. Jennings, who is paid $10,000 a month in his interim post, said he expected a full-time athletic director to be in place by the start of the 2003-2004 school year. The new leader could be named in a few weeks, he said.

Until the new AD is in place, Clark said Jennings was providing just what the athletic department needed — a leader with integrity during a difficult transition.

After Jennings leaves KU, Clark said he didn’t expect him to retire to some Florida condo.

“I don’t know what Drue’s going to be when he grows up,” Clark said. “He’s paid his dues. Based on the tough circumstances of the last couple of years, he deserves to have fun. But he’s committed to the greater Kansas City community. He’s committed to KU.”