Sihka went up the tree after she saw it was coming down.

“I could stay here forever,” Sihka said Wednesday, bundled up with blankets, a tarp and a bongo drum in the cold, rainy weather.

The young woman — who said she has no last name — slept 30 feet in the air Tuesday night, harnessed to the remains of the “Borders Tree.” She was still there Wednesday night.

She won’t leave, she said, without a written promise that the disfigured tree trunk would remain in place.

Downtowners looked on with a mixture of admiration and humor.

“I say more power to her if she wants to get up there and fight for what she believes in,” said Megan McHenry, a Kansas University junior having a beer at the Bottleneck across the street. “But we’re wondering what will happen when she has to pee.”

Owners of the property near Eighth and Rhode Island streets seemed less amused Wednesday but were practicing patience — for now. An unsigned letter from the owners, which includes the Harris Family Properties, promised to use the tree’s remnants in future projects at the site. The letter also asked Sihka and other protesters camped around the base of the tree to leave.

Lawrence Police Lt. Dave Cobb said there had been no requests for police intervention Wednesday afternoon. 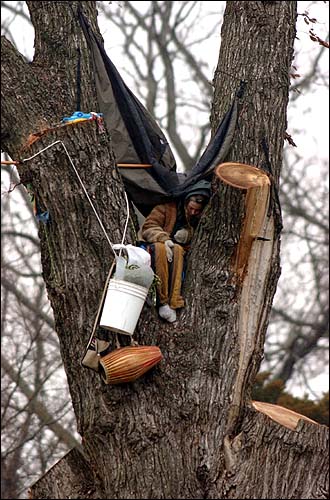 Sihka sits in the razed remnants of an elm tree at Eighth and New Hampshire streets that had its branches removed Tuesday afternoon. The Lawrence woman climbed up the trunk at a vigil for the tree that evening and remained there during cold drizzle Wednesday. She said she intended to stay in the tree until developers promised to preserve its remains.

“I’m sure tomorrow will be a different day,” Cobb said. “It depends on how long they want to stay there.”

Sihka climbed up the tree about 10 p.m. Tuesday during a vigil. Hours before, workers had cut off the branches from the 75-foot tree, leaving only the 40-foot trunk and angering those who had long seen the tree as an icon against the corporatization of Lawrence.

“I’m doing this because they want to turn it into a parking lot,” Sihka said. “I want to keep it up as a monument to our roots.”

Bo Harris, chief executive of Harris Construction, said the tree needed to come down, that it posed a danger to the public. His company had told the East Lawrence Neighborhood Assn. the tree would come down; ELNA President Ed Tato confirmed that account.

“If the tree was not completely dead it was certainly mostly dead,” Harris said. “For liability reasons, we felt like we needed to get the tree down as quickly as possible.”

By Wednesday afternoon, a group calling itself “The Kaya Preservation Society” was circulating a petition asking for a “cease and desist” order on destruction of the tree’s remnants.

Sihka, who wouldn’t give her age or other background information, said she doubted the police would try to remove her.

Although known informally as the “Borders Tree,” the nearby bookstore does not own the property where the tree stands.