With status up in air, standout picks college

McDonald’s All-American Charlie Villanueva has put his NBA dreams on hold for at least a year.

Villanueva, a 6-foot-10, 215-pound forward from Brooklyn, N.Y., who committed to Connecticut instead of Kansas University, withdrew Thursday from the 2003 NBA draft after he wasn’t assured first-round status.

So, it’s on to Storrs, Conn., for Villanueva, who has made no secret of his desire to play in the NBA as soon as possible.

“There were several teams that said if he was still around in the first round they might take him,” Villanueva’s AAU coach, Gary Charles, told Mike Sullivan of rivalshoops.com. “But there wasn’t anything sure. So he took his name out.”

Villanueva — he averaged 21 points and 14 rebounds last season for Blair Academy in New Jersey — originally committed to Bill Self’s Illinois team last November, but dropped his commitment when Self left for Kansas. He made a campus visit to KU and was torn between playing for Self or UConn coach Jim Calhoun.

Josh Boone, another forward who chose the Huskies over the Jayhawks, is expected to battle Villanueva for a starting spot at UConn, ESPN’s preseason No. 1-ranked team. Junior Emeka Okafor is UConn’s other starting forward.

“Connecticut would have had a chance to win the national championship even if Charlie didn’t go there,” Charles said.

“So there isn’t any preconceived notion that Charlie is the main guy on the team. He can just go in, fit in and play.” 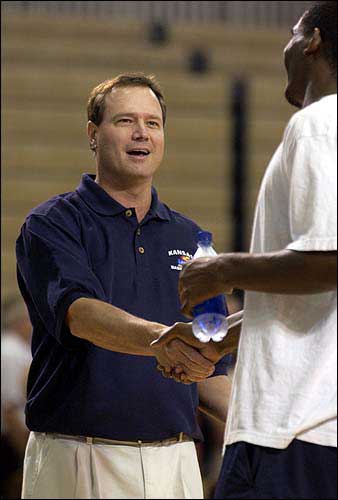 Kalen Grimes, a 6-8 power forward from St. Louis, is considering Kansas, Illinois and Missouri. He will play for the North team with Malik Hairston, a 6-5 guard/forward from Detroit who is considering KU, Ohio State, UCLA, Michigan State, Indiana, Missouri, Purdue and Arizona.

Jason Horton, a 6-1 guard from Cedar Hill, Texas, who is considering KU, Missouri, Florida, Arizona State and Arkansas, will play for the South with Marcus Monk, 6-6 from Lepanto, Ark., who likes KU, Arkansas, Oklahoma, Ole Miss, Boston College and others.

“Kansas, Duke and Oregon have been eliminated from (Williams’s) list,” Bremerton High coach Casey Lindberg told Shay Wildeboor of rivals.com. “I think it came to a point where he realized that he was not going to end up playing for those schools, so I think he thought it would be best if he eliminated them from his list.”

Also, KU likely will play in the season-opening Guardians Classic if the federal courts overturn an NCAA rule that limits teams to two appearances in exempt events every four years. KU would play two home games in the eight-team Classic with semifinals and finals in Kansas City.