Topeka ? One day, you’re in the U.S. Capitol, side-by-side with some of the most illustrious figures in American history.

The next day, you’re covered with bubble wrap in a moving van headed to Topeka.

That was the fate last week of a statue of George Washington Glick.

The marble statue of Glick, an early governor of Kansas, was replaced in National Statuary Hall with a statue of former President Dwight D. Eisenhower

Glick, the first Democratic governor of Kansas, was credited with starting what is now the state animal health department.

Eisenhower, the 34th president of the United States, commanded Allied forces in the D-Day invasion during World War II.

Despite the disparity in star power between the two individuals, some are a bit perturbed about the switch.

“It’s rewriting history to the detriment of the integrity of the process,” said state Sen. Anthony Hensley, D-Topeka.

The heroically posed Glick statue stood majestically in the Capitol since 1914.

Now the 7-foot-5 statue stands, off its pedestal, facing a wall in a warehouse at the Kansas History Center in Topeka. 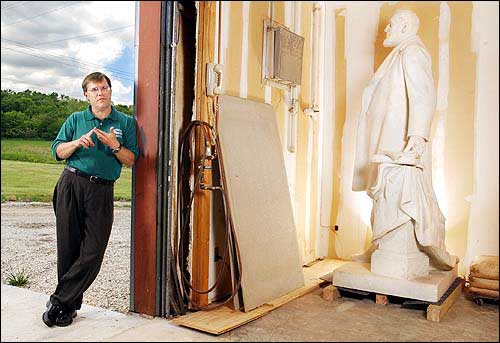 Earlier this month, the statue of former Kansas Gov. George Washington Glick decorated the U.S. Capitol. Today, it has a less glamorous home: the corner of a maintenance building at the Kansas History Center in Topeka. Bob Keckeisen, left, of the Kansas State Historical Society, says the statue will be stored until Kansas Statehouse renovations are complete.

Having the Glick statue in the warehouse and not the nation’s Capitol “says a lot about what we consider as fame,” he said.

There are no plans to display the Glick statue until after renovations are done in several years to the Kansas Statehouse, to which the statue is expected to make its final trip. The statue weighs 3,900 pounds and the pedestal an additional 7,400 pounds.

Statuary Hall in the nation’s Capitol is filled with statues of both the famous and those, such as Glick, who may have been famous for a brief time but have fallen into history’s shadow.

Each state is allowed to have two people represented in the hall, and the removal of Glick was the first time a statue has been switched out.

But it probably won’t be the last. A proposal has been made to replace Kansas’ other statue of U.S. Sen. John James Ingalls with one of Amelia Earhart.

The action by Kansas has started debates in other state legislatures where politicians are rethinking which statues they display in Washington, D.C.

Hensley doesn’t like the precedent started with the removal of Glick’s likeness. “You have to honor the decisions made by our predecessors,” he said.

While not as well known as Eisenhower, Glick had a solid and long political career.

He was a lawyer who moved to Atchison in 1859, served in the Union Army during the Civil War, worked for adoption of a state constitution and then served in the Legislature for 14 years. He was elected the ninth governor of Kansas, serving in that position from 1882 until 1885. In 1884, he called a special legislative session to deal with an outbreak of hoof-and-mouth disease among cattle.

He was one of the few Democrats in Kansas at the time who had been a free-stater.

In later life, he continued practicing law, managed a farm, stayed active in politics and served as a charter member of the Kansas State Historical Society.

The stars lined up

For the first and only time in state history, Kansas had a Democratic governor and controlled both chambers of the state Legislature. 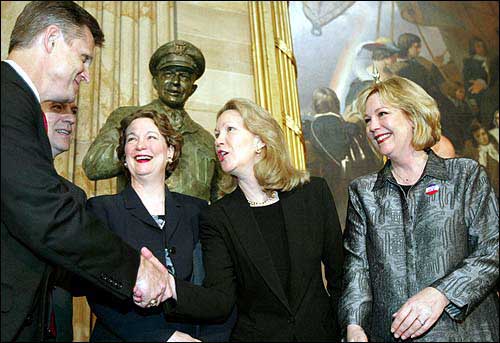 Rep. Todd Tiahrt, R-Kan., greets Dwight D. Eisenhower's granddaughters, from left, Susan, Anne and Mary Jean after the unveiling ceremony of the former president and general's statue in the U.S. Capitol Rotunda. The bronze likeness of the 34th president, clad in his general's uniform, replaced a statue of former Kansas Gov. George Glick.

The Legislature appropriated $6,000 to build a statue of Glick and send it to Statuary Hall.

Virgil Dean, historian at the Kansas State Historical Society, said there had been earlier attempts to have a statue made of famed abolitionist John Brown, but those attempts “mysteriously disappeared.”

But while politics of the time may have contributed to getting Glick’s statue up to Washington, D.C., politics certainly brought him back.

Fast-forward to 1994 when newly elected U.S. Rep. Todd Tiahrt, a Republican from Wichita, was walking through the U.S. Capitol and saw the Glick statue. He declared that he’d never heard of him and decided Eisenhower would be a better representative of Kansas.

Tiahrt worked to get the changes needed at the federal and state level to make the switch, and he, the Eisenhower family and the Eisenhower Foundation commissioned the sculpture from Lawrence artist Jim Brothers, who also made sculptures on display at the national D-Day memorial in Bedford, Va.

Keckeisen said a poll done by state history officials recently found that both Eisenhower and Earhart were the most famous Kansans.

But, he noted, many of the statues in Statuary Hall are of people who are little-known.

“The public perception of fame changes over time,” he said.