Red Dog’s Dog Days is the official title, but most people shorten it to Red Dog Days. By whatever name, the annual community summer conditioning program probably is Lawrence’s most popular unpublicized activity.

Now in its 20th year, Red Dog Days was started by Don “Red Dog” Gardner, a retired city police officer, as a way to prevent Lawrence High football players from suffering injuries during the season.

Gardner and Jim “Punkin” O’Connell, then a police dispatcher, had been serving as unpaid sideline trainers during LHS football games, and it seemed like they were seeing players suffer cramps too often.

“Punkin and I were sitting around talking, and we thought it would be a good idea if we could get the guys to run during the summer and get rid of cramps,” Gardner said.

And so six or seven Lions showed up in the summer of 1984, and, with Gardner in the lead, ran and ran and ran.

“My memories aren’t pleasant in terms of what he put us through,” said Mike Hill, one of those original Lions. “Red Dog would put us through one heck of a workout.”

Now the head baseball coach at Free State High, Hill admits he hasn’t participated in Red Dog Days “as much as I should” over the last few years, but he still is proud he was in the vanguard of what has become an institution.

“It kind of makes me laugh now,” Hill said, “when I see hundreds and hundreds of people out there.” 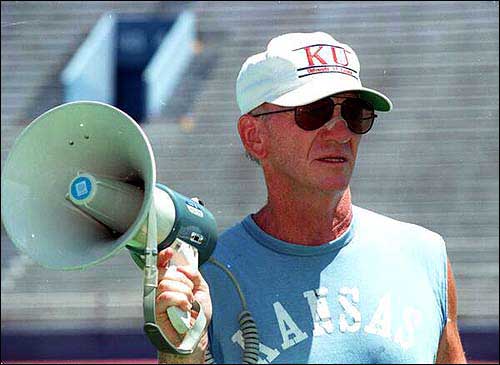 Gardner says more than 900 people customarily show up on Tuesdays or Thursdays in July where there are three daily sessions at 6 a.m., noon and 6 p.m.

That’s not an estimate.

“Everybody has to check in,” Gardner said. “We keep track so we can award T-shirts when it’s over in early August.”

Gardner has a handful of unpaid aides, but none is more important than his wife, Beverly, who does most of the book work. During those three-a-days, she does registrations before she goes to work as a county data processor, then during her lunch break and finally after work.

“I usually go to work at 6:30 in the morning so it works out pretty well,” Beverly said.

Since participation in Red Dog Days is free, Gardner hits up local businesses for donations in order to purchase those coveted T-shirts and other items, such as popsicles for the Saturday runners.

Yes, they even go on Saturdays. During the week, the regimen consists of running, calisthenics and step-climbing at Memorial Stadium, but the Saturday-morning crowd shows up at the Iowa Street overpass bridge near the Lied Center for running or jogging only.

Gardner has no idea how many people will show up when the June sessions begin Tuesday, but he knows he’ll have to order a load of T-shirts and plenty of popsicles this summer.

“It has really taken off the last two years,” Beverly Gardner said.

That’s a far cry from the first couple of years when only a few Lawrence High football players showed up to keep in shape for fall football. 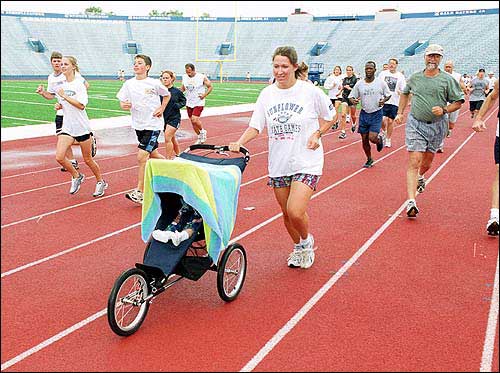 Isabella Hedges and her daughter, Kris, run during the last day of Red Dog's Dog Days in this file photo. The summer conditioning program, run by Don Red

Gardner recollects that girls began arriving in the late ’80s. The Kampschroeder and Oelschlager sisters and Erin McElwain are the ones he remembers.

“They wanted to get in shape for volleyball, and some of them really challenged the boys, too,” Gardner said. “Then we started getting some soccer players.”

Not too long after that, the adults began to trickle in as Gardner asked the teenagers to invite their parents to give it a whirl. Many did, and then word of mouth took over and Red Dog Days grew and grew.

During the last two decades, Gardner’s unique program has been featured numerous times in newspaper articles and on television in the Lawrence-Topeka-Kansas City triad, and Gardner himself has received numerous community awards.

Heck, Gardner even was chosen for Lawrence High’s Hall of Honor in 2002 — quite a button-buster for a guy who was a reserve linebacker for the Lions when players like John Hadl and Doyle Schick were basking in the Lawrence High limelight.

Gardner wasn’t feted for his high school football career, of course. He was recognized for his civic contributions, not the least of which was toiling countless hours as McGruff the Crime Dog while a member of the police force.

Yes, that was Gardner inside the McGruff costume in the St. Patrick’s Day Parade a couple of months ago.

In fact, it’s probably fortunate for Gardner he already had a nickname or people would be calling him “McGruff” today. He picked up “Red Dog” from former LHS assistant coach Wilbur “Nanny” Duver.

“Coach Duver called everybody with red hair Red Dog or Strawberry,” Gardner said. “He called me Red Dog and it stuck.”

“We’re not tired of it yet,” he said, “but we have great helpers. This is number 20 and I don’t know how long we’ll go on. You do get tired sometimes, but Beverly does all the book work and that really helps.”

Thus the curtain will rise on Red Dog Days once again Tuesday, and you don’t need to be bashful. Just show up at the southeast corner of Memorial Stadium at the appointed times and give it your best shot.

“We don’t care how good you are,” Gardner said. “Just show up and try.”