She even tried writing the genre a few times, but its rose-colored lens rang false with her sensibilities, and the books didn’t sell.

“Everyone was saying, ‘This doesn’t fit’ or ‘Your hero is a thief,’ and that doesn’t work. You can’t do that in romance,” the Lawrence author says. “So I just sat down and started writing a book that I wanted to write, and I just happened to be watching all the Jackie Chan films.”

And “Coffee and Kung Fu,” her debut novel, came tumbling out of her head.

The 243-page book challenges the conventions of traditional romance.

Brichoux’s “heroine” is Nicci Bradford, a 26-year-old missionary kid whose American parents raised her in the Philippines. At 18, she comes to the United States to attend college, intent on disguising the fact she was raised in a foreign country but unable to shake the worldly sense of style, politics and complexity the experience inspired within her.

She’s sarcastic, very witty, eats noodles with chopsticks and has a penchant for kung fu movies.

“… the genuine Chinese or Hong Kong Kung Fu movie is pure opera, and based on folk stories and legends that were popular hundreds of years before Jesus was born,” Nicci ruminates in the book.

“Don’t you have any real movies?” the would-be hero, Rob, asks on his first visit to her house.

It’s the first in a string of incidents that makes Nicci wonder if the rich, debonaire owner of a sail boat rental is really the right guy for her. Observing the relationships of her sister, friends and co-workers eventually helps her decide on the direction she wants to take her own life. 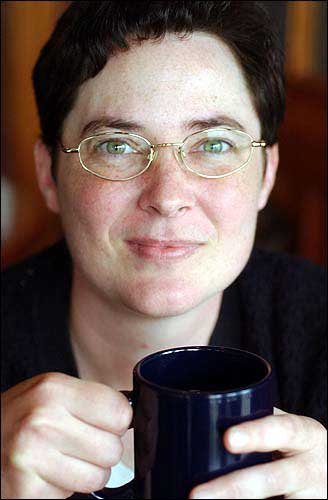 Nicci has a few things in common with the woman who dreamed her up, but “Coffee and Kung Fu” is not autobiographical, Brichoux says.

“A lot of people think it’s autobiographical simply because she’s a missionary kid and because she has a grandpa who reads westerns and it’s in first person,” said the 35-year-old Brichoux, who, like Nicci, grew up in the Philippines. “Every story has some of you in it, but the opinions expressed by the characters may not be your own.”

Nicci certainly has opinions, and most of them clash with those of her family, friends and love interests.

While visiting home for Thanksgiving, her sister walks in the kitchen and wishes the family a Happy Thanksgiving. Everyone else responds in kind. Not Nicci.

“Happy kill an Indian and steal his land because God told you to Day,” she says.

But Nicci’s journey in the book leads her to the realization that the opinions, quirks and needs that make her different are OK.

She never abandons the wisdom of her hero, Jackie Chan. The first-person narrator inserts lessons from kung fu movies throughout the book. For example: “‘Drunken Master’ is a story about appearances and unexpected outcomes. An old man easily defends himself from three young toughs in a restaurant. What the toughs see is an aged, teetering drunk. Easy victory. What the toughs get is a skilled, strong, Kung Fu master. An unexpected defeat. Perhaps the moral of the story is: Appearances can be deceiving.”

The coffee in “Coffee and Kung Fu” refers to the coffee shop where Nicci meets Ethan, a man she can’t get out of her mind, even when she’s in the throws of passion with Rob. Though Nicci’s the type that doesn’t need a man to survive, she strikes a connection with Ethan that redeems her faith in meaningful relationships.

“Coffee and Kung Fu” hit bookstore shelves last week and had received complimentary reviews before it ever reached the public. Brichoux will give a talk and booksigning Thursday at The Raven Bookstore, 6 E. Seventh St.

She said she chose kung fu as a philosophical framework for the book because it was a particularly Asian genre that jibed with the fact that Nicci once lived in the Philippines.

“The Philippines is one of the highest movie-per-capita-watching countries. We spent every weekend just watching back-to-back movies all weekend long in the theaters, which are just gigantic,” she remembers. “We did a lot of movie-watching and watched a lot of kung fu. They were badly dubbed English. It was great fun.”

Jackie Chan is a national hero in the Philippines, she says.

“As for allowing any Jackie Chan philosophy in my life: I think everybody, when they get in a certain situation, sometimes they end up thinking about some movie or book that they read and how it works with it,” she says “Your head does it automatically. It’s sort of like, ‘Oh, this is just like what I saw in “Snatch.” Oh look, the dog swallowed the squeaky toy.'”

Brichoux, a full-time writer who has lived in Lawrence since 1988 and has a bachelor’s degree in English literature and a master’s degree in Medieval history from Kansas University, has a boisterous laugh, dark hair cropped short and wire-rimmed glasses. It took her 2 1/2 months to write “Coffee and Kung Fu.”

“I write really, really fast,” she says. “Sometimes it will take me as much as eight months to get the idea together. The way my ideas come is really odd. Linux has this thing called a tar ball, which is a zipped (computer) file. That’s sort of how I imagine it. I have this little black tar ball, and all these little images stick on it. And, finally, one day, there’s enough there for a story and it just, boom, and then it happens, and I sit down to write it. If I try to write beforehand, it just melts; it I wait too long, it’s boring.”

Brichoux lives in East Lawrence with her husband, Dave, her dog, Mac, and four cats. They can often be seen riding around on a motorcycle with a sidecar — Dave and Karen on the motorcycle, Mac in the sidecar.

She writes every day and has already finished her next book, “Separation Anxiety.” It’s due out a year from now.